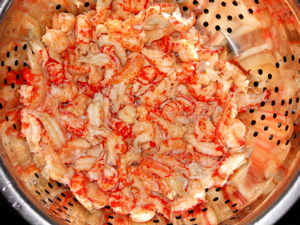 This is 3/4 of a pound of Boudreaux's uncooked, peeled crawfish tail meat.

I had been hankering for a piece of Louisiana cooking for a couple weeks, and decided on crawfish étouffée as my crave buster.

In essence, étouffée means “smothered,” a culinary reference to any dish slow-cooked in a liquid that forms into a gravy as it simmers. Traditionally étouffées are cooked in a covered pot, to keep the moisture inside. This stems from the origins of the étouffée recipe, when lesser cuts of meat were used and they required the extended slow-cook with moisture to break down their toughness. This idea continues to work well in étouffées to ensure the meats are tender and succulent.

The benchmark étouffée is crawfish, but shrimp and chicken are also excellent.

This was my first shot at an étouffée. It is something I purposely waited to make until I got a few more gumbos and jambalayas cooked from scratch under my belt. I must say I’m still a bit intimidated by making a roux. I get the concept much better now, but have yet to make one I’m entirely happy about.

Roux is a homemade thickening agent for sauces or gravies. This basic concoction is equal parts vegetable oil to flour (in this case 3/4 cup each or thereabouts). Heat the oil over medium high heat preferably in a cast iron skillet, until basically smoking, then slowly whisk in the flour. Drop the temperature accordingly as it cooks.

NEVER stop stirring. The key here is to not let this burn.

The more flour introduced the thicker and hotter this mixture becomes. Sometimes it will pop and tiny flour/oil particles land on my skin – that stings. This is hot stuff, and why I refer to roux as “Creole Napalm.” 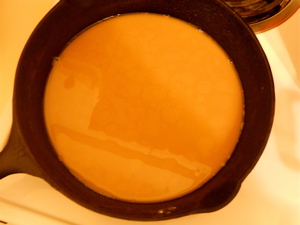 A medium to dark-brown roux.

You must constantly stir the roux or the flour on the bottom will burn. If it even remotely gets singed throw it all out and start over, as that burn flavor will permeate the entire dish if added to the other ingredients.

There are three levels of roux, light brown, peanut butter or dark. I was shooting for dark. This needs 15 to 18 minutes of cooking.

You are out on a line here – like in that Seinfeld episode where Kramer takes the car for a test drive and the gas light comes on, but he elects to keep driving anyway, going for the adventure of never knowing when or where the car will run out of gas.

This is a nebulous line. You basically want to keep cooking right till it almost burns to achieve that dark chocolate-brown color.

I got it to a little past peanut butter and that was as far as I was prepared to go on this occasion. I didn’t want to take the chance. It was already late-ish and I needed to feed the boys before they could go to bed. I didn’t have time to accidentally burn the roux. 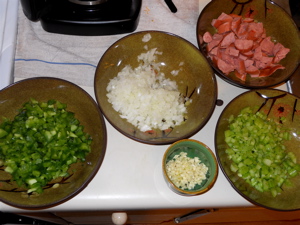 The trinity is all chopped and ready to go, (from left to right) green bell pepper, onion, garlic, celery and smoked sausage.

Prior to making my roux, I like to get all my other ingredients prepped. Here is where the hard work comes in with Louisiana dishes – from chopping up all the vegetables.

I don’t own a food processor, but find slicing and dicing ingredients relaxing (so long as I’m not pressed for time). There’s no way to cheat on chopping vegetables and I have a space-challenged kitchen to say the least. No fun.

The Holy Trinity of all Louisiana dishes is chopped green pepper, onion and celery. These three ingredients are so ubiquitous that often in recipes it will just say “add trinity.”

Get that all hacked up and then decide if you are going to deviate from the recipe in any way. Improvising is often where folks run into trouble.

Étouffée is a hot dish. I call this flavor, others call it spicy. So long as you get the ratio of flavor to spice balanced, improvise away. You just don’t want to end up with a mess of bland ingredients. It generally doesn’t work to try adding spices at the end.

Simmering away, everything has been added but the roux.

Usually what seems spicy at first will cook down anyway once the roux is added, and it all simmers. The spice is further diluted by serving the étouffée over rice.

I pretty much stayed to my recipe, but did add 3 large cloves of fresh garlic and 1/2 pound of smoked sausage.

I have an 8 and 9-year-old I’m cooking for that don’t have the palate to handle the straight spice in this recipe, so I assembled everything, minus the roux, then extracted two servings of vegetables, crawfish and sausage to set aside, draining away the broth, which contained most of the spice. Once I mixed this with rice they ate it up, no problem. I got a double thumbs up.

Two places where you can save time is already having Creole spice assembled (I make my own – and it is far better than anything I’ve found on the market). The other is making a big batch of chicken stock or shrimp stock for a recipe and freezing the left over so you have it on-hand already made.

I didn’t have the time last night to do a stock from scratch, and that was a flavor sacrifice. There is no comparison to the flavor homemade stock has versus what comes in a can or from bouillon. And it’s not that hard. It can be thrown together on a weekend afternoon, where a dinner can be made out of the meat from the chicken, and the bones and assorted other parts and ingredients get thrown in a pot to simmer. 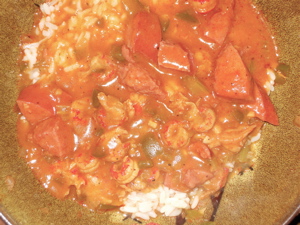 Crawfish Étouffée in its finished form.

I actually thought I could have used a tad more pepper in this recipe. I substituted lemon pepper for black pepper, and dispensed with the lemon zest – because that would have required a special run to the store, and a little lemon goes a long way in my book.

Overall, I thought this was an easy recipe to assemble, and it turned out awesome. It took me an hour/hour and a half from start to finish.

I got a late start being that I didn’t get out of work from the legislature until 7:00 p.m., so I couldn’t let this simmer as long as I would have liked. It still had amazing flavor. I’m betting tonight it will be even better once the layers of ingredients have steeped and the fats in the crawfish and sausage are re-leased upon re-heating.

Below is the recipe – get your cook on and enjoy!

In a large stockpot melt the butter over medium-high heat. Sauté the onion, celery, and bell pepper until the onion is translucent, 7 to 10 minutes. Add the crawfish, bay leaves, and lemon zest and cook for 2 minutes. Add the sherry, black pepper, Creole seasoning, hot sauce, cayenne pepper, chile powder, and salt. Sauté for 1 minute. Add the stock and bring to a boil. Whisk in the roux until the desired consistency is reached. Cover pot and simmer for 20 to 30 minutes. Remove and discard the bay leaves. Serve in bowls over white rice.