Greg Brown and Bo Ramsey play to the crowd in Louisville

Greg Brown played a relaxed concert to a nearly capacity house Friday night at the KCD Theater in Louisville. On voice but not exactly inspired, Brown and his long-time collaborator, guitarist Bo Ramsey, moved through a 90 minute set of songs about life in small town Iowa, love and loss, and lessons learned.

I’m never sure where Brown gets his style advice, but he came out in his usual semi-disheveled appearance, sporting a trucker hat, sunglasses, work shirt, cargo pants and boots.

Brown generally sets a welcoming tone. His shows are always very personal, almost to the point that I feel we’re invading his privacy. Sometimes I’m not sure if he’s happy to be there or not, but once he starts sharing stories with the crowd, the concert takes on more of an aura that we’re sitting around Greg’s living room, listening to an old friend sing songs.

That approachability is countered by Brown’s wry sense of humor and keen wit. He reminds me of some rogue spiritual advisor that lost his way. His insights come at the expense of his personal failings. Heed them at your own risk.

Ramsey opened the show with a quiet repertoire of introspective pieces that were small vignettes of framed experiences from this reclusive former rockabilly guitarist.

What has always worked so well for Brown and Ramsey together is their contrast in styles; Ramsey brings his electric guitar down a notch to add some telling spice behind the acoustic NPR/art house musing of Brown’s storytelling.

These days Bo and Greg are both sitting throughout their sets. This isn’t some raucous show, but Greg Brown’s voice is like no other. His deep baritone, soulful and plaintive, is soothing. He’s like a Midwestern Leonard Cohen.

Hearing Brown play is like a familiar auroma – it transports me. I’ve twice lived in Iowa City, and Brown is such a distillation of that landscape, hearing him, especially with Ramsey, puts me back in Iowa for a second without the long drive, which is a nice feeling.

The theater at Kentucky County Day was lovely, intimate, with great sight lines and excellent sound. Louisville can always use another quality venue for live music. Parking was easy and free, there was beer, wine and liquor available, which I wasn’t sure they would have, and the crowd was enthusiastic. 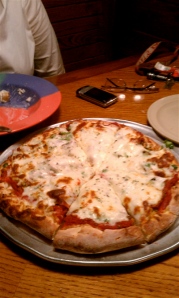 To put an unexpected topper on the night I lucked my way into meeting Greg Brown and Bo Ramsey after the concert. By chance I struck up a converstation with the theater manager before the show and told her I had lived in Iowa City previously, so I was psyched to hear these guys play.

After the show I went up to the manager to get contact information for her photographer who shot the concert, and she asked me if I wanted to meet the performers, so Maia and I got to go back stage and have a chat with Greg and Bo. That was an added bonus.

This was a nice chill night, just what we were looking for on a Friday after a hectic work week. We went over to Wick’s Pizza in Middletown afterwards and took down a much-needed combo pizza, since we didn’t have time to eat prior to the show, then carefully drove the 50 miles back to Frankfort.