As students were milling about in the commons area before classes began at Marshall County High School last Tuesday, a 15-year old classmate entered with a handgun and methodically opened fire, killing two and injuring 18.

One child, 15-year old Bailey Nicole Holt, died at the scene, and Preston Ryan Cope, 15, passed away after being airlifted to Vanderbilt University Medical Center in Nashville. Four others injured were also airlifted to Vanderbilt, about 120 miles south, which is the nearest Level 1 trauma center. All were boys aged 15-18, and in critical condition.

“We had three injuries – (2) gunshot wounds to the head – one did not survive unfortunately. It was a traumatic injury that was non-survivable to start with,” said lead trauma surgeon Oscar Guillamondegui. “We had an injury to the arm which is successfully being treated and the final injury was to the chest and abdomen.”

The other injury was not gunshot related. All four are going to survive, as the injuries were fairly minor.

The suspect, Gabe Parker, being led out of Marshall County High School in custody.

The suspect is 15-year old sophomore, Gabe Parker, who was arrested at the school by Marshall County deputies. The boy will be charged with two counts of murder and multiple counts of attempted murder, according to Kentucky State Police. It is believed he will be tried as an adult.

The shooting occurred just before 8AM in a crowded atrium in the center of the school where students gathered to eat breakfast and talk at that hour of the morning in this rural southwestern Kentucky high school located in Benton. Witnesses said the shooter appeared to know what he was doing and was determined in his acts – pulling the trigger as his arm jerked upward from the recoil, bang, bang, bang. He kept firing, picking targets at random, until running out of ammunition, when he took off running to try and get away.

Student Bryson Conkwright witnessed the shooting from 4 feet away and said the shooter looked lifeless and didn’t think twice about what he was doing. “You could tell he wasn’t thinking about it. He didn’t hesitate. He pulled it out and he just did it. He didn’t care. Something happened to him. He was…I don’t get it. Something happened to him that made him want to do that,” said Conkwright.

The call went out, “Five shots fired. Four down at the high school at Marshall … one unresponsive.” First-responders arrived nine minutes after the shooting began. Hundreds of students fled for their lives in a mad scramble, leaving behind backpacks, purses and cellphones in the commons area. Students slipped in spilled coffee and soft drinks, tripping over other students and forgotten shoes as they ran for safety. 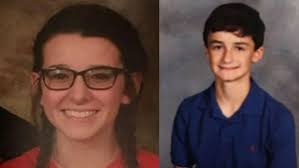 One of the first state troopers to arrive Tuesday morning saw the young woman who died and initially thought she was his daughter, who had been dropped off at the school just before the shooting.

Inside the commons area was a bloody mess, with bodies lying about on the ground. Abandoned cell phones were going off in differing ring tones as families were frantically calling to check on their kids.

Police found the weapon, a pistol, in the back side of the high school. Gabe Parker, the student accused of the shooting, had run to a room in the school where other kids were hiding and attempted to blend in and talk with other students as if nothing had happened. Sheriff’s deputies apprehended him moments later and he was led away in handcuffs.

There is talk that Parker was bullied at the school, but that remains an open question. Students who had classes with him said Parker was quiet and kept to himself, was a member of the band, did what he was asked to do in class and did not cause discipline problems.

Scene from a candlelight vigil to honor the fallen and comfort survivors.

My heart breaks for the parents of these two 15-year olds who were killed. The enormity of such a sudden and tragic loss – how does one rebound from that? The rage I would feel and self-doubt of how I wasn’t there to protect them. It’s asking a lot of a parent to find their way back to normal after losing a child under these conditions.

School should be a safe zone for kids, a place of nurturing and understanding, but more and more there is bullying and violence. Much like what we are seeing in our workplaces and in society as a whole, something is cracked and getting lost down in the crevices, because we are not identifying the signs of troubled individuals, as mass shootings are happening in America on nearly a daily basis.

It was blessed to hear the father of Preston Cope was able to reach the scene in time to comfort his son and say goodbye. Once hearing of the shooting, Brian Cope recognized his son on a stretcher from the socks that were visible in the television report. These were the same socks he had laid out for Preston the night before. It was also apparent from what his father saw that his son was severely wounded. Thankfully Cope reached his son in time to say he loved him one last time.

Likewise it’s impossible to fathom the pain, guilt and baffling questions that must overwhelm the suspected shooter’s parents. Turns out the editor of the Marshall County Daily Online newspaper, Mary Garrison Minyard, raced to Marshall County High School to cover the story Tuesday only to find her child was in custody as the shooter. This is still a child and there will be an extreme helplessness and shame the parents must shoulder that will come with having to watch their baby go through being punished for his crime.

This attack marks the first fatal school shooting in 2018. According to the anti-violence group Everytown for Gun Safety there have been at least 283 shootings at schools since 2013.

Marshall County High School is about 30 minutes from Heath High School in Paducah, KY, where a 1997 mass shooting killed three and injured five. Michael Carneal, then 14, opened fire there about two years before the fatal attack at Columbine High School in Colorado.