Posted on October 1, 2017 by theurbanllama 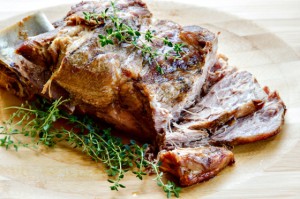 Recently I was cruising through the grocery in the meat department and came across a sizable selection of Boston Butt pork roasts priced at $1 a pound. Being that I cook for five on a nightly basis this was right in my wheelhouse as an attractive dinner option to feed my hungry posse. The question that jumped to mind was what exactly is a Boston Butt and what could I do with it?

I’ve trucked through the supermarket several times this year and seen similar pricing on this cut or pork shoulders. Aside from dropping either into a crock pot, nothing immediately came to mind to concoct with these large hunks of meat, or at least few that my crew readily digs.

As I learned a Boston Butt or pork butt is a cut of pork that comes from a hog’s upper shoulder of the front leg and may contain the blade bone. In pre-revolutionary New England, butchers from that region placed less prized cuts of pork like hams and shoulders into barrels for storage and transport, known as a butt. This particular cut became known around the country as a Boston specialty, and hence the name “Boston Butt.”

These roasts are a tougher cut of meat and need to be cooked at a low temp for several hours – slow and low is key. The great thing about a Boston Butt is it contains plenty of natural fats that create internal moisture from its juices while roasting. This is a built-in safety net in case one cooks the meat at too high a temp or for too long, as the moisture prevents this cut from burning or drying out easily, and preserves the meat’s tenderness.

A Boston Butt is popular with barbecue enthusiasts for all the above reasons. Slow and low is the only way to properly infuse a hickory smoke flavor into meat. It works best with a larger roast, say 8-to-10 pounds, but keep in mind it will require around 12 hours of attending and attention to cook it right for delicious pulled pork sandwiches. A smaller roast can work, but the flavors balance out better with the larger size.

I wanted to try something less labor intensive and not barbecue oriented. After acquiring a 5 pound roast for $5 at my local Pic Pac grocery I was ready to get cooking. Word to the wise, plan ahead for this recipe. It takes time to do it right, and will cause stress if attempting to throw this together at 5PM for a dinner the same night. It will end badly.

Take the head of garlic and strip away the outer covering from all the cloves; with a sharp knife make small cuts in the surface of the meat. These need to be maybe an inch deep, sufficient to insert a whole garlic clove into each. Spread these out across the meat’s surface.

Place the roast in a greased casserole dish, preferably use butter; sprinkle the roast on all sides with Worcestershire Sauce, and cover with a lid, or aluminum foil works fine.

Let this sit at room temperature for 90 minutes.

After 90 minutes has passed spoon any Worcestershire Sauce that has accumulated on the bottom of the dish back on the roast (a barbecue brush is good for this task).

Using hands press the brown sugar well into the meat on all sides, making sure to adhere the sugar to the meat. It should absorb into the Worcestershire Sauce and cake thinly to the sides. It doesn’t hurt to get some down into the slits with the garlic cloves.

Place the roast in the oven and immediately reduce the oven temperature down to 250 degrees.

Cook the Boston Butt for approximately one hour per pound or until the meat reaches a juicy tenderness and slices easily. I wouldn’t call this falling apart tender, but it should slice like butter. (HINT: All ovens are a little different, and there is no harm in kicking the temp up to 275 or so if it doesn’t seem like the roast is getting done.)

Once the roast comes out of the oven, sprinkle salt and pepper into the juices collected in the bottom of the casserole dish, and serve with wild rice or mashed potatoes, and a favorite vegetable.

BONUS: If there is any meat left over, it works great in a Jambalaya-type rice dish the following day. The garlic and Worcestershire flavors really sink in with just a hint of apple, and offers a rich taste after a night or two in the refrigerator. Include some sliced Andouille sausage to add a spicy pop, with diced onion, celery, and green pepper, and voila you have a whole new dish for later in the week.