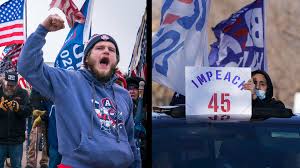 In the wake of the calamitous riot spearheaded by President Donald Trump and his merry band of seditionists, Democrats turned to the one lasting punishment only the House of Representatives could deliver upon this corrupt chief executive, impeachment.

The violence and criminal hate displayed by Trump loyalists as they stormed the Capitol on Jan. 6, was revealed to be worse than first witnessed. Subsequent video and commentary from perpetrators showed premeditated intent to harm elected officials and overthrow the U.S. government.

It would be dishonorable to allow Trump to sit idle for a week without consequences considering five people died at his behest. An official censure from Congress, as proposed by Republicans, would be laughed off by Trump and his ilk, like some verbal slap on the wrist given a violent schoolyard bully.

Democrats reached out to Vice President Mike Pence about invoking the 25th Amendment but he was unwilling to make such an overt rebuke. House Speaker Nancy Pelosi, who was visibly angry, chose impeachment as a method to permanently besmirch Trump for his treasonous behavior.

On Jan. 11, the House introduced a single article of impeachment for the act of “incitement of insurrection” against the U.S. government. On Jan. 13, the article was adopted as 222 Democrats were joined by 10 Republicans in voting affirmative, with 197 Republicans against. Trump is the only federal officeholder to be impeached twice. The first incident was December 18, 2019, when he was impeached for abuse of power and obstruction of Congress.

Mercifully Trump was kicked off social media over his want to incite violence and decay. Silencing his deranged rantings has been a welcomed relief and spun The Donald into a new stratosphere of pissed off.

The immediate fallout from all this is the Trump brand has been irreparably downgraded. Big Don at least had a body of work to hang his hat upon. The family merely treads on his coattails. Now that all of them are pariahs it’s unclear how they will navigate polite society.

This week comparisons started to be made between Trump and Richard Nixon, as the final days for both these presidents were mired in disgrace and discussions of impeachment. While Nixon was a horribly flawed human being and a criminal, he did love the country and was an accomplished statesman.

Trump has rarely shown respect toward American democracy, nor the patchwork of ethnicities making up the country’s diverse culture. Instead he favors marginalizing those different from him and mimics autocratic maneuvers whenever possible. His failure to govern during the Covid-19 pandemic, and all the anti-mask sentiment he spawned, will go down as one of the great humanitarian failures in modern history as nearly 400,000 Americans died under his watch.

Trump has since forbidden the name “Nixon” being mentioned in the White House. Regarding the Teflon Don officially joining Nixon in the criminal category, those litigations will likely commence shortly after Trump is removed from power on Jan. 20.

The thing I remain unable to wrap my head around is why this man was ever viable to run for president. Once he mocked Sen. John McCain (R-AZ), as not being a war hero it should have been over. This showcased Trump’s lacking moral character, bellicose demeanor and inappropriate nature.

Then there was Charlottesville and his race-baiting commentary. Not to mention the frequent violence he advocated with vigor at his white power rallies that masqueraded as political events. The man would root on attendees roughing up dissenters, falsely offering to pay any corresponding legal bills. With all this darkness and isolationist commentary it bewilders me why none of this stuck to Trump.

Considering the antagonism and intolerance on display over the past four years it’s no surprise he incited the Capitol riot. What is more troubling is the number of supporters who tolerate or believe in Trump’s view of America and are willing to employ violence to help create his fake reality. It gives one pause as to how deep a rift truly is running through our society and the fragile nature of American democracy.

While Trump may have skated over most of his landmines, what we are beginning to see is  his divisive rhetoric has formed a montage of hate that finally is coming into focus when viewed through the lens of the Capitol riot.

Most thought the Trumps were bad people. Now everyone knows they are.