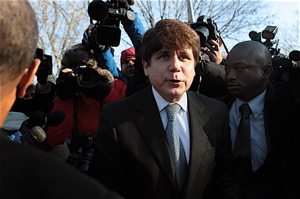 Prison for Blago is only a day away.

There are bad days, and then there is the one Rod Blagojevich will have on Thursday.

The disgraced former Illinois governor, who was convicted on federal corruption charges, must report for incarceration at the Federal Correctional Institution – Englewood, in Littleton, Colo., outside of Denver.

Blagojevich, 55, was arrested in December 2008 by the FBI in Chicago on political corruption charges. The Illinois House of Representatives voted to impeach Blagojevich, a Democrat, in January 2009, and he was removed from office later that month.

It took three years and two trials, but Blagojevich was convicted of political corruption including charges of conspiracy to commit mail and wire fraud and solicitation of bribery.

Most of this centered around Blagojevich’s blatant attempt to sell the U.S. Senate seat vacated by President Barack Obama for political favors and donations. The two-term governor and father of two was sentenced to 14-years in federal prison for his crimes.

Throughout his trials and into Wednesday, Blagojevich refuses to apologize or take responsibility for his actions – claiming his appeal will set him free.

This is a guy caught on recorded footage by the federal government cutting deals to use the sale of the Chicago Cubs as a means to sway favorable political coverage, and ordering aides to sell the Senate seat in Illinois to the highest bidder.

Wednesday he was seen around Chicago sporting one of his trademark tailored suits, with an impeccable tie and that ridiculous hair. Blagojevich, often referred to as “Blago,” is known for his flamboyant dress style, such as the hand-crafted Charvet ties he favors from Paris.

On the FBI tapes it was revealed how hair-obsessed he could be. Blago insisted his aides carry a hairbrush for him at all times, which he referred to as “the football.” This was a sad attempt at humor by insinuating his hairbrush was like the warhead launch codes that U.S. presidents must keep at hand, which is known as the nuclear football.

Word is from the spokeswoman at the Federal Bureau of Prisons that the guards don’t have a strict hair care policy.

That must be such a relief for Blago that his iconic locks may remain.

Prison consultants who specialize in preparing white-collar individuals for transition to life behind bars indicated on CNN that Blagojevich has a rude awakening coming his way Thursday.

Upon checking into the Federal Bureau of Prisons, Blago is going to be strip searched and find a correctional officer inserting his fingers into the former governor’s rectum as part of a standard body cavity search.

That’s a rough way to start any day.

It might have felt like the Illinois House and Senate did away with any remaining dignity that Blagojevich had with his impeachment, but fear not, the prison system is going to access a whole new level of dignity to remove from this man’s soul.

Prison is all about taking away an individual’s freedoms, rights and power. This tends to be especially hard on those who held positions of high importance.

The guards control an inmate’s day-to-day life, and what they say goes. They are going to be younger, less well-educated and Blagojevich must deal with that.

Fear not, he will still be able to earn a living while behind bars. Usually the guards like to break down an individual first, so Blagojevich could find himself cleaning the prison toilets literally with a toothbrush, at a robust .85 cents per week.

The worst thing you can do is pull attitude or blow up. As the theme on Baretta advised, “don’t do the crime if you can’t do the time.”

When Blagojevich surrenders Thursday, this will give Illinois the unique distinction of having its last two governors serving time behind bars simultaneously. Blagojevich will join George Ryan, a Republican, who is serving a 6 1/2-year sentence in a federal prison in Terre Haute, Ind.

I can’t imagine what is going through Blagojevich’s head tonight. All those stereotypes about prison life have to be keeping him up. Inmates are going to know he was a governor, and presided over one of the largest prison systems in American. He was responsible for upholding convictions and commuting others – all while perpetrating his own crimes.

That probably won’t be looked upon too fondly by Blago’s new colleagues in Colorado.

Under federal rules, he will serve 85 percent, or 12 years of his sentence. Maybe he can make friends with Jeffrey Skilling of Enron fame. He’s serving out his 24-year sentence for conspiracy and insider trading at the same facility.

In the end this is a tale of power breeding contempt, that turned into reckless abandon and a horrible abuse of office. Blagojevich is a grown man, who made some poor choices, and now he is headed to general population in a federal prison.

This couldn’t happen to a better guy.

This entry was posted in News and tagged Blagojevich, Chicago, political corruption. Bookmark the permalink.