Posted on December 14, 2017 by theurbanllama 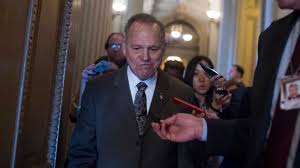 The tide did roll Tuesday night in Alabama’s Senate election, right over the top of President Trump, Steve Bannon, and most importantly consuming Republican Roy Moore.

In this current age of Trumpism, all decent people, regardless of affiliation, have desperately been seeking where the line in the sand is for the misogynist behavior and hateful rhetoric the Trump administration has bred. Tuesday night an indelible mark of intolerance was registered in the unlikely confines of ruby-red Alabama, when Democrat Doug Jones upset accused pedophile Roy Moore.

As polls closed at 7PM Tuesday, only 1 percent of the vote was reported and Moore’s lead was minimal, but kept edging upward, until two hours later it reached a margin of 50,000. It began to look dire for the Democrat, as concessions began to be made for how hard Jones had worked but it was such a long slog through deep Republican water.

Injecting a level of calm into this emotional evening were John King on CNN and Steve Kornacki on MSNBC. Both manned digital maps of Alabama’s voting districts to analyze returns in real-time. Instead of partisan rhetoric coming from the panels of talking heads, King and Kornacki offered hard data and insight into possible trend lines.

The shift in the race began slowly after 9PM, dropping Moore’s lead to 30,000, as Alabama’s historic Black Belt, located in the bottom third of the state, which runs from counties on the east border across to the west, came in solidly for Jones. Additionally, strong Democratic returns came from Jefferson County (Birmingham), Shelby County (Birmingham’s suburbs), Madison County (Huntsville), and Mobile County (Mobile).

As the recorded vote in red districts maxed out at 100 percent, Kornacki’s enthusiasm was ebullient. Not from partisan joy, but that he could see the math and an emerging reality. Soon there would not be enough Republican votes left to overcome the likely tallies anticipated from heavily blue counties, especially in Birmingham and Mobile.

Jones achieved what few thought possible, he tapped into Obama’s coalition and drew at or above the turnout margins Barack Obama saw in 2008 and 2012 from African-Americans, something Hillary Clinton was unable to replicate.

Doug Jones received 95 percent of the black vote. This combined with Moore only securing 70 percent of the white vote meant the Trump surge vanished. Exit polls showed Trump’s approval rating Tuesday at 48 percent, a stunning number when considering how solidly Republican Alabama was for the president less than a year ago.

Much of this blame can be placed on Roy Moore. It would be tough finding a less fit individual to run for office anywhere. He’s on record saying gay people should be put in jail; that America was better off under slavery; that Muslims should not be allowed to run for public office; and is a credibly accused pedophile, as nine women say Moore inappropriately approached or abused them as young women or girls.

Trump initially believed these women and distanced himself from Moore, as did the Republican National Committee (RNC). But in the last weeks of the campaign Trump went all in for Roy Moore, even campaigning for him at a rally in Pensacola, Fla., where Trump told the people of Alabama, “Get out and vote for Roy Moore. Do it, do it.”

Likewise the RNC sent its staff and money back to Alabama for Moore. These displays of weak moral values in the interest of maintaining a partisan vote in Washington served to energize the electorate against Moore, and suppressed loyal Republicans, who could not support Moore as they had Trump.

Case in point is Shelby County, which represents the suburbs of Birmingham, where college educated whites reside. This should have gone heavy for the Republican, around 75 percent. Moore won the county, but only by 14 points, 56 percent to 42 for Jones.

In Tuscaloosa County, home of the Alabama Crimson Tide, Trump beat Clinton by 20 points in 2016, only to see a 36 point swing Tuesday night as Jones beat Moore by 16.

In addition to the courage it took for the nine women to come forward and tell their stories about Judge Moore – there were two other stand-up individuals who made public their vehemence that Moore was even allowed a platform to run by the Republican Party.

One was senior Senator Richard Shelby (R-AL), who took a stand on the news shows last Sunday to say no to Judge Moore, “that Alabama deserves better than Roy Moore.”

The other was NBA legend Charles Barkley, a Republican and Alabama native, who played college ball at Auburn. In Birmingham Monday night Barkley endorsed Jones at a rally, and challenged voters to take a stand, “I am begging and urging everybody to get out, call all your friends. We gotta, at some point, we gotta stop looking like idiots to the nation.”

These were both powerful condemnations of Moore from inside his own party, and helped lead to a stunning defeat for Trump. How is it possible that Republicans can control the House, Senate and the Presidency, yet not win a Senate election in Alabama?

Steve Bannon riffing about everyone he hates the night before the election.

In this instance it was because Trump, Steve Bannon (the president’s former chief strategist) and the RNC consciously chose to support a racist, homophobic pedophile.

In fact Trump is a two-time loser in this race. First backing Luther Strange in the primary, and then followed Bannon’s advice to disregard the female victims, and instead praised Roy Moore in hopes of securing his puppet vote in the Senate.

Jones’ victory marks the first time Alabama has sent a Democrat to the Senate in a generation, and that individual was Sen. Richard Shelby, who switched his party affiliation from Democrat to Republican shortly after his 1992 victory.

What Trump and the Republican Party still don’t recognize is that this little Senate race in Alabama wasn’t about Doug Jones or even Roy Moore. This race went nationwide, and the world tuned in to watch, as this became the first meaningful rebuke of President Trump, his failed policy agenda and his platform of hatred.

It’s not just Alabama voters who are energized. Indications are the nation is champing at the bit for Nov. 2018, to place a check against Trump’s agenda and amend the mistake of allowing such an unfit individual to lead America and tarnish our country’s ideals.

The public is fatigued by Trump’s poor judgement and inept decision making displayed since taking office, and it shows in his national approval numbers and with Moore’s defeat. It didn’t help matters that Trump chose Tuesday to attack Senator Kirsten Gillibrand (D-NY), further accentuating his child-like temperament and misogynistic attitudes in real-time as Alabama voters were going to the polls, stating on Twitter:

“Lightweight Senator Kirsten Gillibrand, a total flunky for Chuck Schumer and someone who would come to my office “begging” for campaign contributions not so long ago (and would do anything for them), is now in the ring fighting against Trump. Very disloyal to Bill & Crooked-USED!”

In every election there are winners and losers, but it’s rare when a Democrat wins a race, especially a Senate seat, and even Republicans cheer the victory. One of those winners was Tina Johnson, who Moore groped in 1991 when she was 28. After the election was called for Jones, Johnson said she was “very thankful for the result and that women will not be silenced.” This is so true, and exactly what Sen. Gillibrand said to Trump.

You know who else was a winner Tuesday night and refused to be silenced – the fine residents of Etowah County, Alabama. This is home to the city of Gadsden, where Roy Moore grew up, and where the Gadsden Mall is located. This is the same mall that Judge Moore was banned from entering when he was in his 30s because of his reputation for repeatedly attempting to pick up underage girls out shopping. Tuesday night, Etowah County residents voted 74.1 percent for Democrat Doug Jones to 24 percent for Moore.

Tuesday was a good day in America. Democracy won out. Freedom of the Press held strong. Women’s voices were heard. And a credibly accused pedophile was denied a seat in public office. Freedoms are held dear in this country. Roy Moore has faced his jury and burned. Donald Trump and his hypocrisy are just beginning to face adjudication.