Trump’s Trouble with the Truth

Remember in grade school learning about the former presidents. There was a mythical quality surrounding young George Washington and his escapade of chopping down a cherry tree. He could never tell a lie. My how times have changed.

Now we have Donald Trump, who can’t last a news cycle without tweeting falsehoods in an attempt to distract or avenge perceived slights. Don’t waste time waiting on an apology. Niceties and responsibility are not taken by Trump. I don’t envy teachers that must justify this president’s behavior to impressionable minds. It’s absolutely true that words do matter, and this president is setting a deplorable example of how to conduct oneself to children and adults alike.

We’ve heard how Trump had the hugest inaugural crowd ever, accept that wasn’t accurate. The Donald will tell tales of how he actually won the popular vote in November’s election if not for the millions of fraudulent ballots cast for Hillary. Again, not true. Did you hear the one about how President Obama wiretapped Trump and his campaign buddies. That was a whopper that really got the intel community laughing, but also blatantly untrue.

The security blanket voters wrapped themselves in after Trump’s unlikely victory was the prospect that his lust for making deals on behalf of America would necessitate he surround himself with intelligent advisors who knew the ways of Washington. Wrong again. The guy is such a chaos train wreck the only people he can keep close are family, sycophants and adult babysitters.

Instead the West Wing and cabinet heads were filled by a bunch of Wall Streeters, Jared & Ivanka who are pointless, Steve Bannon who seeks an isolated perfect race, or there’s Mike Flynn and Jeff Sessions, both with their Russian ties and Flynn forced to resign, perhaps facing charges.

Putin and Russia seem to be a soft spot for the president. The tangled web of Trump associates linked to Russian contacts has risen to the level of a full on FBI investigation. What The Trumpster failed to recognize with his sending of the fake Obama wiretap tweet, is it refocused everyone’s attention on Trump’s love for all things Putin.

Forcing James Comey, director of the FBI, to come testify on Capitol Hill to dispel any truth from Trump’s wiretapping allegation opened up the bigger trap door. From this self-inflicted wound we learned that Trump’s people were talking with Russian spies already under surveillance by U.S. intelligence. Now Comey let it be known that an investigation is underway regarding Trump associates colluding with Russia to affect the outcome of the presidential campaign.

Comey stated, “If any Americans are part of that effort then that is a very serious matter.” Trump responded with a tweet saying that any suggestion that his associates coordinated efforts with Russian officials was “fake news.” 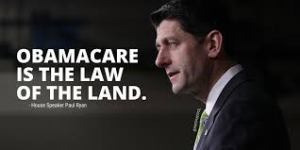 With all of this percolating in the background Trump decided the time was right to push for a vote on the Republican alternative to the Affordable Care Act. After eight years of Sen. Mitch McConnell, chief obstructionist, proclaiming his enthusiasm to pull Obamacare out root & branch, the Republicans still couldn’t come up with a functional alternative. Yet Trump slammed on the accelerator.

In the end Speaker Paul Ryan pulled the bill from the floor when insufficient votes were available. It’s not dead mind you, this will likely come back for a vote, but moderate and conservative Republicans could not find common ground. It’s amazing that with eight years to prep a replacement, this garbage of a measure that would cost millions of Americans coverage, and offers a massive tax cut for the super wealthy, was the best the Republicans could pull together.

Donald Trump told voters it would be easy passing Trumpcare. It would be cheaper, have more choices, cover a larger population, and come with lower deductibles. None of that was true. 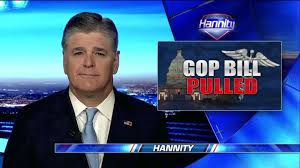 “Nobody knew that health care could be so complicated,” Trump acknowledged after realizing the issues surrounding health care were more involved than the repeal-and-replace Republicans had let on. Maybe he could have asked any health care policy expert in Washington. It would have saved time and embarrassment.

But this is who Trump is to his core. He lies, cheats and steals. That can work for a shady businessman, but not as president. Especially since Trump is the cheap version of a huckster. He brags about an image, but underneath, where it counts, Trump is a snake oil salesman. He has nothing of substance to offer. The praise he dispenses is heaped upon fellow creeps like Roger Ailes and Bill O’Reilly from Fox News. Both serial sexual harassers, and both forced to step down in disgrace for their humiliating behavior.

I understand in theory why people voted this man in office, but Trump is not the guy to be given this kind of control or power. He is not equipped to contemplate the information that needs processing on a daily basis as president. Much less piece together the myriad of responses necessary for our constituencies and foreign allies. All those relationships and the current status of each must be maintained and its importance recognized. Thus far Trump can’t keep a single story straight for an afternoon.

I’m not sure if the man is having a senior moment, or it’s early onset Alzheimer’s disease, but Trump is unable to do the job of president. He operates like a spoiled prince rather than as a president, shooting his mouth off over Twitter with no thought of the implication his words carry. The time has come for competence to enter this White House, or Donald Trump and his circus of imbeciles needs to pack up and return to Crazy Tower.