Regardless of good intentions, rarely do I manage to depart my house on a road trip as early as anticipated. Maia and I had taken Friday off and were driving to Atlanta to see Radiohead on April 1 at Philips Arena. Instead of exiting at the crack of dawn, it ended up being late morning before we actually hit the road. Honestly, with all the commotion swirling around our lives these days, the last thing either of us wanted to do was rush.

The 400-mile drive down was pleasant, and afforded an opportunity to chat & chill. Thankfully we swooped right in to Atlanta around 7PM, without being impacted by the I-85 bridge collapse from the previous day. We had a room waiting at the W Hotel-Downtown. That was a sweet address, super chic, hip, and walkable to many attractions in the area, including our show Saturday.

After cleaning up and getting a cocktail or two we sought a comfortable place for dinner. I had scouted Atlanta outposts, but they were primarily barbecue joints and decadent sandwich spots. Hole-in-the-wall was not sounding pleasant after such a long drive. There would be plenty of time for those the rest of the weekend. Tonight we wanted some upscale comfort.

Since Georgia is a coastal state, seafood was high on my priority list. After coming across Atlanta magazine on the Net, I pulled up its 50 Best Restaurants issue and felt an immediate attachment to No. 15 – Noble Fin.

“Its dining room may look bland, but Noble Fin is one of metro Atlanta’s most assured and satisfying seafood restaurants. Its guiding inspiration was a traditional fish house, drawing on chef-owner Jay Swift’s time in Boston and Baltimore. Indeed, you cannot find better crab cakes in the city, but Swift also serves a more succulent New York strip than most steakhouses inside and outside the Perimeter. It’s the rare restaurant that delivers more than it promises.” ~ Atlanta magazine, Feb. 1, 2017.

So this would be a little adventure in itself. Our destination was located in what is known as OTP or Outside The Perimeter, meaning it was beyond the city’s encapsulating freeway of I-285. I know it sounds crazy getting back in the car, but we had no interest in driving all that way to eat in some lame chain restaurant nearby. Besides it’s little jaunts like this when I usually end up finding the best food or happen upon something unexpected. This drive promised both. 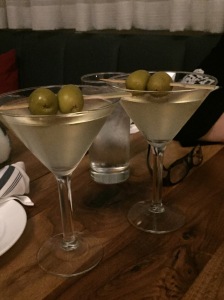 It was an easy 25 minute trip, upon which we found Noble Fin in a nondescript suburban shopping area. Once inside we were immediately transported to a coastal atmosphere. The decor was modern yet rustic and extremely comfortable, with its weathered hardwood flooring, mix of booths separated by steel and frosted glass, and an open kitchen that was fronted by a hollowed-out canoe.

We were seated at a rather roomy four top. Time for some serious cocktails. I wanted something clean yet powerful, and Dirty Martinis go perfect with fish or steak. I went with Tanqueray Gin, extra-swampy, up with olives. Maia chose the Ketel One vodka version. Both arrived in perfect condition. I took this as a good sign.

Normally I wouldn’t consider ordering critter at a seafood restaurant. Often any meat on a seafood menu is placed there as an afterthought to appease the few that can’t figure out fish, but the restaurant review pointed out that was not the case at Noble Fin. One of the Friday night specials was a 22 oz. Cowboy Ribeye. I asked our server of its deliciousness level and she assured me of its spectacularity, so I gave it a run. Maia opted for one of their signature dishes, the Seared Diver Scallops.

To give my meal a slight seafood spin I ordered a cup of the house-made Clam Chowder, which I had read was impressive. It was fabulous. I kinda wish I had ordered a bowl, but with the bread and size of the steak to come, less was best.

My steak was immaculate. A perfect medium rare, and the size of a small hubcap. I started doing a happy dance right there in my seat. Each bite was a festival of flavor. Steaks, even good ones, are routinely done properly but fail to be remarkable. This offering from Noble Fin was one of the best pieces of meat I’ve ever had the pleasure to sample, and rivaled anything from the best steakhouses in Chicago. It also was $60, and should have been good, yet exceeded expectations.

Maia’s scallops were perfecto as well, meaty yet delicate, with a succulent smoky flavor. We both ordered another round of drinks, then kicked back to enjoy each other’s company and Noble Fin’s hospitality.

Throughout the dinner we built a rapport with our friendly and knowledgable server, Christine. She had visited Louisville previously so we had that in common, and she was sweet enough to give us a thumbs-up/thumbs-down on possible Atlanta attractions and some inside skinny on non-tourist spots to hit.

On the drive back to our hotel we bumped into the I-85 bridge collapse. That was a surprise. The construction crews were diligently working around the clock to get the disaster cleaned up. There was no traffic at this late hour, but I could only imagine what the Monday morning rush hour would be like.

My friends, always remember looks can be deceiving, and unexpected adventures often lead to discovery. Noble Fin delivered on both, and was a satisfying experience that was more than worth the drive.