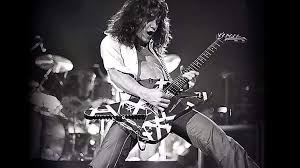 Eddie Van Halen, the influential guitarist and co-founder of hard rock band Van Halen, died after a years-long battle with cancer on Oct. 6, 2020. Van Halen was 65.

Edward Lodewijk Van Halen, was born in Amsterdam, Netherlands on Jan. 26, 1955. He moved with his family to Pasadena, CA, in 1962. Eddie and his brother, drummer, Alex Van Halen, co-founded their namesake band in 1974.

Eddie was the band’s main songwriter and a ground-breaking guitarist. He is considered one of the all-time greatest guitar players in rock history, ranked No. 8 on Rolling Stone’s 100 Greatest Guitarists of All Time.

Part of Van Halen’s urban legend is the cobbling together of his custom hybrid guitar from scrap parts. The maple neck cost $80, while the Northern Ash body was bought for $50. The tremolo arm was originally taken from a 1958 Fender Stratocaster, and was later replaced with a Floyd Rose arm. The guitar had a single Gibson PAF (patent applied for) humbucking bridge pickup from a Gibson ES-335, which he enclosed with paraffin wax to prevent feedback.

This was Van Halen’s attempt to combine the sound of a classic Gibson guitar with the physical attributes and tremolo bar functionality of a Fender Strat. A copy of Frankenstrat is housed in the National Museum of American History in Washington, D.C.

This fabricated monster of a guitar, Eddie’s irreverent playing, the hair, bandanas, overalls, wrapped together with the band’s sheer joy on stage drew millions of fans to Van Halen. They were a shot in the arm to an aging 70s rock scene.

Van Halen crawled out of an L.A. gutter amidst the ashen remains of Punk, Disco, and 70s acid rock. For us 1980s kids, Van Halen was a band to call our own. They were immediate. Vital. And still evolving.

Gene Simmons from Kiss was the first to get Van Halen into a recording studio. He bankrolled a 29-track demo tape in 1976, but could find no interest from record execs. It was after a sizzling performance at the venerable L.A. club, Whisky a Go Go, that Ted Templeman signed the band to Warner Bros.

Van Halen’s eponymous debut came on Feb. 10, 1978. It peaked at No. 19 on Billboard, selling more than 10 million copies in the U.S., and became one of rock’s most commercially successful debuts. 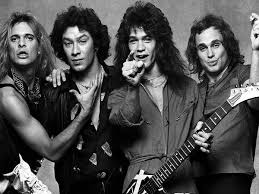 What set the band apart from your average hard rock act was the structural underpinnings to Van Halen. Eddie was a virtuoso. David Lee Roth, with his long hair, bare chest and martial arts moves was the perfect circus front man to lead this outfit. Eddie’s raw guitar set the tone, but what caught people by surprise was the layering of sound, multi-voiced harmonies, a palpable sense of humor, paired with a tight rhythm section supplied by Alex on drums and Michael Anthony on bass.

Against this backdrop Eddie performed his two-handed tapping technique for playing guitar solos. This isn’t something he invented. It was popular with flamenco guitarists for a century, as well as the likes of Paganini on both violin and guitar. It involves using both left and right hands on the guitar neck, which makes for dramatic stagecraft when showcased live.

Additionally, in 1982, Eddie Van Halen contributed the guitar solo to Beat It, for Michael Jackson’s Thriller, which became the biggest selling album of all time. 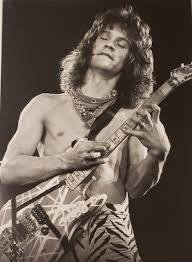 Throughout life Eddie struggled with alcoholism and drug abuse. He began smoking and drinking at the age of 12, and later admitted to requiring alcohol to function. This contributed to an illustrious history of instability within the band. He entered rehab in 2007 and was sober since 2008.

Van Halen began receiving treatment for tongue cancer in 2000. The subsequent surgery removed roughly a third of his tongue. He was declared cancer-free in 2002. It was suggested his tongue cancer was due to Van Halen’s habit of holding a brass or copper guitar pick in his mouth.

Van Halen suffered health issue for the remainder of his life. He was hospitalized in 2019, after battling throat cancer over the previous five years. His ex-wife, actress Valerie Bertinelli, also mentioned a battle with lung cancer he had in an Instagram post after the guitarist’s death. He ultimately died of a stroke at Saint John’s Health Center in Santa Monica, CA on Oct. 6, 2020.

Van Halen ranks 20th on the RIAA list of best-selling artists in the United States. The band has sold 56 million albums in the States, and more than 80 million worldwide.

Van Halen was inducted into the Rock and Roll Hall of Fame in 2007.