Posted on November 27, 2020 by theurbanllama

Has America lost its way?

The results from the 2020 Presidential Election showed a bitterly divided country. A majority of the population sought leadership from the medical science community throughout the current pandemic. The remaining 30-plus percent of the electorate had a problem with facts. They chose to receive life and death medical advice from a reality television host playing president. These are the same folks who consider the coronavirus “fake-news,” and question whether 300,000-plus Americans really died from Covid-19.

If scientific results, or sourced news reporting for that matter, are no longer considered valid, uncomfortable truths can simply be swept away, replaced by fabricated narratives better suited to a conservative ethos. Neither is the rule of law respected by Trump and his followers. It’s just something else to manipulate and get around.

The rub is facts matter. Pres. Trump is learning this the hard way as he peddles conspiracy theories about widespread voter fraud through legal channels. Lacking any tangible evidence, courts have repeatedly rejected the president’s arguments.

This cult of personality presidency has fundamentally altered the way America practices its democracy. We stopped investing in allies or the future. Look at the infrastructure dilemma, schools, education or healthcare. These issues at best received lip service under Trump.

His focus instead was on feel good projects such as building glitzier immigrant detention facilities, and seizing land along the Southwest border, where he might live out his border wall wet dream.

How’d that whole ‘getting Mexico to pay for it’ bit work out?

Trump supporters vehemently push his agenda, and pine for his re-election. But Joe Biden rose to the presidency as more of a coalition action plan to take down the sitting president.

People appreciate Joe Biden as a person. They know him and are comfortable with his presence, leadership and commitment to country. That being said Biden was the beneficiary of a defining anti-Trump protest vote cast by embarrassed moderates, independents and a sizable chunk of the Democratic electorate.

This leaves the Republican Party to face a vexing question. Either it’s going to find a way to silence some of its far right minority, learn to play nicely with others and actually govern – or it risks becoming a party of knuckle draggers. Interested more in grandstanding about perceived infringements on personal freedoms and advocating a platform that violates Constitutional guarantees.

HOW DID WE GET HERE

The last decade has been problematic to Republicans. Between the changing population nationally, a populace that supports alternative lifestyles, gay marriage, getting married later, never getting married, no kids, pro-choice, better educated, gun control, climate change – the Republicans are out of step with every major issue, and they know it.

George Wallace, a staunch segregationist who served as the 45th Governor of Alabama for four terms.

To combat these changing demographics the party became more polarized. Reagan and others saw it as easy pickings to rouse up the far right with images of patriotism and religious fervor, but they didn’t take it seriously themselves.

These leaders failed to adequately calculate just how seriously this lot took all the patriotic window dressing and Jesus chatter.

The GOP has homogenized itself. Believers walk lockstep, group-think and don’t question a good cover story. This nostalgia-driven group, seeks some reclaimed version of Andy Griffith’s fictional Mayberry, apparently believing they can keep a changing world at bay by putting up walls.

For them the concepts of freedom to gather and of religion are mere Constitutional stumbling blocks needing to be hurdled, while Second Amendment rights are narrow and absolute. The Republicans have become the caveat party. The party of conflicting ideals and obstructionism.

And with that fear present in the conservative electorate, the Republicans played their strongest hand by whipping up religious zealotry, lonerism, discrimination and hate-mongering.

Talk about expanding your base and promoting inclusion. The Republicans opened up room under their tent for those previously left outside the boundaries of the polite establishment wing of the GOP. 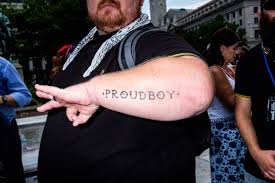 The Proud Boys are a far-right, neo-fascist and male only political organization that promotes and engages in political violence.

Militias were welcomed, end-of-the-worlders, white power, white supremacists, even Russians. All were welcomed to bask in the light of Trump. No worries, we’ll tuck it behind talking points about gun rights, limited government and religious freedom.

With the assistance of our “fair and balanced” friends at Fox News, the message for the simpleminded was broadcast in unison, like a finely choreographed Broadway play. For those hungry to drink up paranoia, the same message was heard emanating from the Republican political establishment, its ankle-biting lobbyists, special interest parasites, think tank chameleons, and carnival barkers like Rush Limbaugh.

With all those conservative sources united in telling a desperate demographic, hungry for miracles, that their freedom was being persecuted by “Stay Safe” orders and mask ordinances – well it must be the true, right?

Demographics show the groups that reside on the fringe are less well educated, come from depressed economic conditions, lack employment options and reside in areas where immigrants and minorities are moving into previously lily-white enclaves.

Change has arrived in most every corner of America, and the fringe is scared. They don’t get what is happening, nor do they want to understand the realities of why these changes are occurring. They can’t compete in a global economy and time is running out on their chances for an American Dream of their own.

This group was looking for a soothsayer, a snake oil salesman. Anyone who would tell them, “America is great. We are number one.” Didn’t matter if it was true. Enter Trump. It’s delusional and has proved dangerous. In the meantime conservative Republicans edge further right as their misguided anger builds.

This spin sharpened the Republican message with its political polarization and obstructionism. Conservative politicians lost their decorum and ability to be embarrassed for holding ideals that were hypocritical to making America a better and stronger country.

Peoples manners in general have gone in the toilet, especially in politics. Emboldened by Trump’s inappropriateness, Republicans decided to yell louder and with more irreverence to mask the idiocy of what they echoed on the president’s behalf.

See Trump’s repeated claims of widespread voter fraud as a reason for loosing the 2020 election, or the administration’s diagnosis that Covid-19 was no big deal and would be gone by spring 2020.

On a national level the trend lines are clear. Republican margins are dwindling, and in important voting blocks, like Latinos, women, millennials, it is unclear there is a viable conservative inroad to swing those populations. This makes the GOP’s path to the White House growingly treacherous.

Will those same trend lines drift down into local and state-based election results? The jury remains out. In 2020, it did not play that way. Trump lost, but down-ballot Republicans faired well. Nationally, Biden will be sworn in as the next president in January, the House is under Nancy Pelosi’s able control, and pending two senatorial run-off races in Georgia, Mitch McConnell could find himself in the minority.

If the GOP can’t find a way to broaden its message there is no wall to build that will not be topped. Because right now they are a party of exclusion. It is Democrats who have a welcome mat displayed out front to greet all comers.

How much longer can the Republican Party, with a straight face, continue denying the science of climate change? Solutions may be painful to big business, but acting like these interconnected weather anomalies are not actually taking place inflates the GOP’s credibility gap.

Sen. Kelly Loeffler (R-GA), posing next to Chester Doles, a former Ku Klux Klan leader and member of the neo-Nazi National Alliance, who was sentenced to prison in the 1990s for assaulting a Black man in Maryland.

Meanwhile, the middle class is under siege. Wages have been stagnant for decades. In my youth moms stayed home with the kids. That was great from a childrearing standpoint, but women entering the workforce was huge, and a welcomed change. Yet the fight continues as women still don’t make a fair wage, and now two income families are faced with dual stagnant incomes that inflation has roared past.

Somebody must stand up to Wall Street, and let the CEOs and CFOs and all the other bloated fat cats know their salaries need cutting, profit margins trimmed and proceeds redistributed to include the working class. The current system is bankrupting people and making it near impossible to achieve home ownership. Much less allow single moms to afford the security of raising kids in a safe environment.

For America to remain great the nation must invest in its people. Don’t keep the riches for just the one percent. If Republican leaders can’t see their way to a more inclusive, pro-people, pro-worker platform, the GOP may find itself out of business.