10 Habits That Make You Fat

There is no doubt that trying to get fit, get in shape and lose weight is a tough endeavor. To hit your marks really takes self-control in all aspects of life. The obvious task is hitting your workouts, but a lot goes into making that possible. What you eat, how much you eat, when you eat, what time you go to bed, when you get up, prioritizing tasks to allow time for exercise, limit television watching, etc. It’s a sizeable list that requires daily attention.

What I really don’t have time for are things that supposedly help you lose weight but in reality often trigger weight gain. We all fall off our wagons at some time, whether that is food, sex, alcohol or whatever. Don’t be too hard on yourself. Everyone needs to break out from a routine at certain times in order to keep it going. Instead be honest about what you are going to indulge in and then try to minimize the damage.

This concept is what got my head thinking as I read the below list of “10 Habits That Make You Fat.” What is really scary about some of these items is they are not a one-time overindulgence that can be eliminated with a few hard workouts. These are lifestyle choices people make based off of poor advice, or they make the mistake of listening to advertisers claiming the healthy benefits behind certain products or diet fads.

The first thing to keep in mind is that the food industry has no interest in you losing weight. They want you to eat more, with the intention that you will be overweight. And they will trick you with additives, chemicals and other sneaky sugars to assist you in consuming more edibles so they can make more money. If they can convince your mind that you are addicted to something they offer that is ideal for them.

There is no secret to losing weight. You exercise and track calories, and the pounds come off. It’s simple math – burn more calories than you consume and the result is weight loss.

“Most low-fat or fat-free foods actually have just as many calories as their full-fat versions, because of added sugar and chemicals. And there’s no debate on this one: Since we made “cut down on fat” our favorite food craze roughly 30 years ago, the U.S. obesity rate has doubled. Among children, it has tripled. That’s a failed food policy if ever there was one,” said EatThis! Health.

Replace the following habits now to discover a slimmer you.

10 HABITS THAT MAKE YOU FAT

1. EATING LOW-FAT:  It sounds crazy, but stop buying foods marketed as low-fat or fat-free. Typically, they save you only a few calories, and replace harmless fats with low-performing carbohydrates that digest quickly – causing a sugar rush, and immediately afterward, rebound hunger. Researchers from the University of Alabama at Birmingham found meals that limited carbohydrates to 43 percent were more filling and had a milder effect on blood sugar than meals with 55 percent carbohydrates. That means you’ll store less body fat and be less likely to eat more later.

2. NOT SEEKING NUTRITION ADVICE:  When Canadian researchers sent diet and exercise advice to more than 1,000 people, they found that the recipients began eating smarter and worked more physical activity into their daily routines. Not surprisingly, the habits of the non-recipients didn’t budge.

3. SLEEPING TOO LITTLE OR TOO MUCH:  According to Wake Forest researchers, dieters who sleep five hours or less put on 2 1/2 times more belly fat, while those who sleep more than eight hours pack on only slightly less than that. Shoot for an average of six to seven hours of sleep per night – the optimal amount for weight control.

4. EATING FREE RESTAURANT FOOD:  Breadsticks, biscuits, and chips & salsa may be complimentary at some restaurants, but that doesn’t mean you won’t pay for them. Every time you eat one of Olive Garden’s free breadsticks or Red Lobster’s Cheddar Bay Biscuits, you’re adding an additional 150 calories to your meal. Eat three over the course of dinner and that’s 450 calories. That’s also roughly the number of calories you can expect for every basket of tortilla chips you get at your local Mexican restaurant. What’s worse, none of these calories comes paired with any redeeming nutritional value. Consider them junk food on steroids. 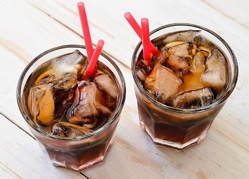 5. DRINKING SODA – EVEN DIET:  The average American guzzles nearly a full gallon of soda every week. Why is that so bad? Because a 2005 study found that drinking one to two sodas per day increases your chances of being overweight or obese by nearly 33 percent. And diet soda is no better. When researchers in San Antonio tracked a group of elderly subjects for nearly a decade, they found that compared to nondrinkers, those who drank two or more diet sodas a day watched their waistlines increase five times faster. The researchers theorize that the artificial sweeteners trigger appetite cues, causing you to unconsciously eat more at subsequent meals.

6. SKIPPING MEALS:  In a 2011 national survey from the Calorie Control Council, 17 percent of Americans admitted to skipping meals to lose weight. The problem is, skipping meals actually increases your odds of obesity, especially when it comes to breakfast. A study from the American Journal of Epidemiology found that people who cut out the morning meal were 4.5 times more likely to be obese. Why? Skipping meals slows your metabolism and boosts your hunger. That puts your body in prime fat-storage mode and increases your odds of overeating at the next meal.

7. EATING TOO QUICKLY:  If your body has one major flaw, this is it. It takes 20 minutes for your stomach to tell your brain that it’s had enough. A study in the Journal of the American Dietetic Association found that slow eaters took in 66 fewer calories per meal, but compared to their fast-eating peers, they felt like they had eaten more. What’s 66 calories you ask? If you can do that at every meal, you’ll lose more than 20 pounds a year!

8. WATCHING TOO MUCH TV:  A University of Vermont study found that overweight participants who reduced their TV time by just 50 percent burned an additional 119 calories a day on average. That’s an automatic 12-pound annual loss! Maximize those results by multitasking while you watch – even light household tasks will further bump up your caloric burn. Plus, if your hands are occupied with dishes or laundry, you’ll be less likely to mindlessly snack – the other main occupational hazard associated with tube time.

9. ORDERING THE COMBO MEAL:  A study in the Journal of Public Policy & Marketing shows that compared to ordering a la carte, you pick up a hundred or more extra calories by opting for the “combo” or “value meal.” Why? Because when you order items bundled together, you’re likely to buy more food than you want. You’re better off ordering your food piecemeal. That way you won’t be influenced by pricing schemes designed to hustle a few more cents out of your pocket.

10. FACING THE BUFFET:  Cornell researchers found that when eating at a buffet-style restaurant, obese diners were 15 percent more likely to choose seats with a clear view of the food. Your move: Choose a seat that places your back toward the spread. It will help you avoid fixating on the food.

This entry was posted in Exercise, News and tagged fitness, nutrition, running. Bookmark the permalink.