The King Is Dead – Long Live THE KING!

B.B. King has left the building, and there will never be another one like him. King, 89, died at his home in Las Vegas on May 14, 2015, after what is believed to be a series of small strokes related to his long-time struggle with diabetes.

Born on a cotton plantation to a poor sharecropper in the Mississippi Delta, Riley B. King, known widely by his stage name of B.B. King (which stood for Blues Boy), rose to play before presidents, the pope and millions of fans. Rolling Stone magazine ranked King number 6 on its 2011 list of the 100 greatest guitarists of all time.

He was a self-taught musician, believed to have received his first guitar around the age of 12, from his mother’s first cousin, Bukka White, a bluesman of his own renown. This led to an accidental style that became a trademark of King’s, as he never learned how to sing and play guitar at the same time.

He always would alternate between his booming baritone vocals, followed by flurries of guitar notes to fill the void when his voice was quiet. King was famous for his facial expressions and body language while playing, as if the grimace on his face and the extending of his torso could help bend the notes hard enough to make us feel the tears that were shed.

“When I sing, I play in my mind; the minute I stop singing orally I start to sing by playing Lucille,” said King.

His style of play came natural and was a sophisticated blending of traditional blues, jazz, pop, and swing. His influences were T-Bone Walker, Lonnie Johnson and Blind Lemon Jefferson, along with jazz guitarists Django Reinhardt and Charlie Christian.

He looked like he was preaching as he played, head back, eyes closed, and notes just pouring forth from his guitar, known as Lucille.

For those not familiar with King’s playing, I can’t recommend enough your purchase of the recording, “B.B. King Live at the Regal.” Recorded in November 1964 in Chicago, this may be his best recording, and remains one of the great live recordings in popular music history. The energy and connection between King and the crowd is palpable. 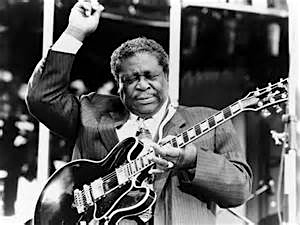 King gained mass visibility among rock audiences from performing as the opening act on the Rolling Stones’ 1969 American tour. He won a Grammy Award in 1970 for the song “The Thrill Is Gone, which hit on the pop and R&B charts. That song also earned the number 183 spot on Rolling Stone magazine’s “500 Greatest Songs of All Time” issue.

In 1988, King reached a new generation of musicians when he recorded the single “When Love Comes to Town,” with Irish rockers U2. In 2000 he teamed up with British guitar legend Eric Clapton to record the album “Riding With The King,” which also won a Grammy.

King received nearly every accolade in his field: 15 Grammy Awards; inductions into the Rock and Roll (1987) and Blues Foundation (1980) halls of fame; a Kennedy Center Honor; Presidential Medal of the Arts and Medal of Freedom; the International Polar Music Prize; and honorary doctorates from Yale and Brown.

He is considered one of the most influential blues musicians of all time, earning the nickname “The King of the Blues”, and one of the “Three Kings of the Blues Guitar” along with Albert King and Freddie King.

He cut a large shadow performing for nearly 70 years, with his ever-present guitar, Lucille, always nearby. 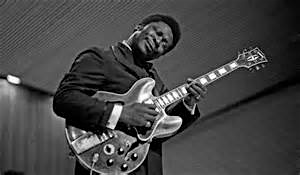 There were more than a dozen Lucilles. The original was named when King rescued his guitar from a juke-joint fire in Twist, Ark., in the early 1950’s. The fire was started when two men fighting over a woman named Lucille knocked over a kerosene lamp. King fled the blaze and then remembered his $30 instrument. He ran into the burning building to rescue it. The name was a reminder to never again run into a burning building, but King also liked the idea of seeing his guitar as a lady. For the rest of his life, King addressed his guitars – big Gibsons, curved like a woman’s hips, as Lucille.

I first saw B.B. King back on Sunday Dec. 14, 1986 at Bogart’s in Cincinnati. It was an awe-inspiring experience for me as a 19-year old. He was vibrant and at his storytelling best. The passionate chants for “Lucille” were boisterous and persistent all evening. 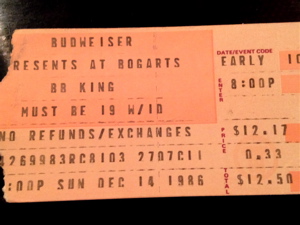 That was a much more personal level of investment into the music than found in your typical rock acts of the day. This was a relationship between you and the artist, and it was a participatory situation. He wasn’t just playing at you. And the subject matter was common, something we all could get our heads around: fast women, whiskey, nightclubs and my money bein’ done spent.

B.B. King is one of those true originals, who shaped the evolution of popular music as we know it today. Those cats are quickly becoming scarce on this planet.

So I raise my cup to the King on his way past, the taillights of his black limousine fading as he speeds away. It was a pleasure. Play on brother, play on.

This entry was posted in Events, Music, News and tagged B.B. King, Riley B. King. Bookmark the permalink.