Posted on December 15, 2012 by theurbanllama 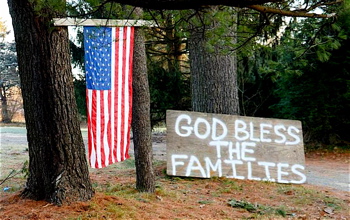 Friday morning Adam Lanza, a 20-year old resident of Newtown, Connecticut had a problem, and he decided to settle it by shooting his mother in the face, and then went to Sandy Hook Elementary School, where he murdered 20 children and six adults before turning the gun upon himself.

How do you shoot 20 innocent children?

They were little kids between five and 10 years of age.

This upscale New England township of 27,000, located about 60 miles northeast of New York City, was the idyllic spot to raise a family. Surrounded by woods with babbling creeks, only one homicide had been reported in Newtown over the past 10 years until Friday.

America has seen so much gun violence lately. While these are harsh times in our country, and our social safety net is not what it should be, that doesn’t explain why people feel compelled to take out their personal issues on innocent bystanders by bringing guns to work, or school, or into a movie theater, and then opening fire.

I’m not advocating suicide. The gift of life is not something to toss away lightly, but if life has become too burdensome, by all means check yourself out, but don’t take others down with you.

The sad part about this tragedy is that initially it will re-energize the gun control debate, but that initiative likely will fade and the deaths of these 28 people will matter little to those outside their families and community.

A visibly upset President Barack Obama vowed Friday to “take meaningful action, regardless of the politics,” to prevent future tragedies like the shooting massacre at Sandy Hook.

But what does that really mean?

There is going to be a clamor to clamp down on handgun sales in some way; about limiting the number of weapons owned, perhaps stop the sale of semiautomatics, and there will be hand-wringing about how many guns are available on the streets of America, but I doubt anything will come of it.

The NRA is a powerful advocacy group. It is well-funded, influential and organized. The pro-gun lobby is already out making the case for enhanced gun freedoms in the wake of this incident.

Dressed in black army fatigues and wearing a bullet proof vest, Lanza came to Sandy Hook Elementary School around 9:30 a.m. armed with a Glock and a SIG Sauer, both semiautomatic pistols, and a .223 Bushmaster assault rifle.

All three weapons were legally purchased and registered by Lanza’s mother. 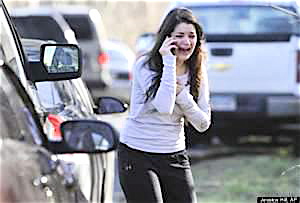 Panicked phone calls in the aftermath of the Sandy Hook massacre.

Unfortunately, this heartbreaking event, and ones like the Aurora, Colo. shooting earlier this year, where James Eagan Holmes killed 12 people and injured 58 others, only serve to help gun zealots make their case.

That Lanza and Holmes were troubled kids, that they were perhaps mentally unstable or had personality disorders, allows for strict advocates of the Second Amendment to argue that crazy, unpredictable people are out there, and that we need to bear arms on our persons at all times for protection.

Now they will want guns in the schools. Applications across the country for permits to carry concealed will increase, bringing more guns into proximity with innocent people – in the name of “safety.”

I’m afraid the only way to stop this flawed line of reasoning is to wait until an incident occurs where bystanders shoot other innocent bystanders while attempting to stop a crime.

I’m not such an idealist that I don’t recognize that we already have nearly enough guns on the street to provide one to every man, woman and child in America. And each gun will outlast its owners in terms of durability – so guns are out there and will be out there.

There is not going to be some retroactive declaration that requires handguns be surrendered. America was founded upon violence. It is part of our culture and we are guaranteed the freedom to keep and bear arms.

Nobody is trying to eliminate gun ownership, but there is a question of responsibility. How can we balance this freedom with laws and precautions that will limit availability to criminals and the mentally unstable?

A couple simple things would go a long way to preventing some of these incidents.

One, keep police and military grade equipment out of the hands of the public. We don’t need access to bullet proof vests, tear gas, automatic weapons or assault weapons. I don’t care if people like collecting the stuff or want to go play weekend warrior – ban the sale of all this equipment to the public.

Second, close the gun show loophole, whereby people purchasing any firearm must undergo full background checks. Sorry if that means a pistol can’t be purchased same day – pay a fee and it can be shipped once the background check is complete.

This is one situation where safety outweighs convenience.

Nothing can be done to preclude a person from privately selling their firearm to another interested party, but tightening restrictions on new purchases would make a statement and be a step in the right direction.

There is considerable statistical evidence that in places like Europe, where handguns are banned, that there is a corresponding lesser level of gun violence.

More guns do not make us safer, in fact exactly the opposite has been proven true.

America sees record levels of accidental deaths in homes from guns being improperly handled or stored; suicides are more successful because people have access to firearms; and arguments and crimes more often end up deadly because instead of them simply resulting in a minor physical altercation, people in America pull out handguns.

The grieving has only begun for those who suffered a loss in Newtown.

Sandy Hook was the second worst mass shooting in U.S. history, behind only Virginia Tech in 2007, where 32 people were killed.

Ironically, only two days prior, Jacob Tyler Roberts, 22, entered a crowded Oregon mall wearing a mask and opened fire with an AR-15 semiautomatic assault rifle, killing two people then killing himself, but this didn’t spark any outcry for gun control.

Sadly society has adjusted our moral outrage to accept situations like this mall shooting.

Yet we’re not all right with assailants going into our schools and killing little kids.

Will that change in the near future too?

There will be more of these events, but if we begin to limit the number of new guns entering our society perhaps a couple generations down the line we can start to see a decline in the number of guns in America and fewer gun fatalities.

This entry was posted in News and tagged Adam Lanza, Newtown, Sandy Hook. Bookmark the permalink.