Iowa in the Bluegrass

Posted on March 9, 2012 by theurbanllama 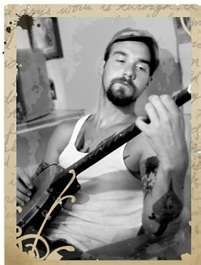 Friday has finally arrived. What a long week. For those who aren’t tethered to a television tonight watching basketball – and let’s be real these conference tournaments are a bit lame – here are two fantastic alternatives for getting out to see some live music this evening in Louisville.

Both come courtesy of the Iowa heartland, and both are immediately identifiable by their unique baritone voices and sparse backup arrangements.

While only in his early 30s, Will Whitmore has the voice of an elderly African-American that sounds as if he has been drinking whiskey and smoking Lucky Strikes all his life. Will actually gave up the cigs a few years back, and his obsession with death.

[Listen to Diggin’ My Grave]

Covered in tats and hailing from a ramshackle farm along the banks of the Mississippi River in Iowa, Whitmore sings stark tales about rural life in the Midwest, and how he overcame the loss of his parents at a very young age, along with the regret and addictions that came with it. Redemption is a big theme in Whitmore’s work.

Interwoven amongst these life challenges are modern political commentary and a healthy dose of anger towards authority, particularly the “man’s” enforcement mechanism, “Johnny Law.”

Usually Will takes the stage with nothing but his voice, an acoustic guitar and a busted-ass banjo. His stomping foot sets the rhythm.

Whitmore is currently touring in support of his latest release, Field Songs, and is opening for Lucero this evening.

Make him feel welcome and buy him a shot of Maker’s Mark – he’ll be eternally grateful.

[Listen to Cold and Dead]

For a slightly more calm option on a Friday night I recommend:

From the Hacklebarney region of southeast Iowa, Brown is an astute study of the human condition. He might be the best architect of describing the life and texture of the Midwestern condition.

Brown solidified his reputation in the 1980s, when he was a frequent guest on Garrison Keillor’s long running radio variety show, A Prairie Home Companion.

If there was a hootenanny, Greg Brown is the guy to bring along. He has songs falling out of his pockets. He can walk to the grocery or fry up some eggs and something so simple will become a poignant tune.

His concerts are extremely personal and intimate. His daughter Pieta Brown is an accomplished musician in her own right, and while she will not be along for this evening, Brown’s longtime collaborator, and electric guitar shaman, Bo Ramsey, who is married to Pieta, is opening the show and most certainly will join Greg on stage.

Ramsey is one of the most efficient guitarist you will hear. He can eek out quiet notes and bend a string that tell more with less – which is a unique talent. Ramsey picked up a lot of big-world cred when he produced and played on Lucinda Williams lauded Essence disc.

[Listen to ‘Cept You and Me Babe]

Ramsey, along with Greg Brown and William Elliott Whitmore are guys that like to keep things simple. They enjoy their lives, family and friends, and particularly love the state of Iowa – so they’ve consciously chosen to eschew the brighter spotlights found in New York, New Orleans, Nashville or Los Angeles, any of which would bring them greater fame and riches. Instead keeping if lo-fi and opting to live their lives on their own terms where they please.

Do yourself a favor and get out to see either of these shows – your soul will thank you.