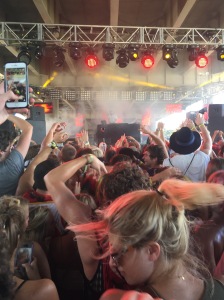 If you dig music and are looking for a weekend out of the house, snag a ticket to the Forecastle Festival in Louisville. Some 60 alt-rock, hip-hop and EDM bands are playing over three days at Waterfront Park on the banks of the Ohio River.

Tickets remain available. General admission 3-day passes are running $189.50; single day tickets are $79.50; and 3-day VIP passes are $424.50. That is face value, and at this point the costs are at the peak tier-level pricing. If you are a possible last-second attendee, like myself, do not pay the full ticket amount, unless cost is no issue and convenience is the top priority.

I’m interested but only at a specific price point. Investigate the secondary ticket market on Craigslist or similar sites for discounted admission. A quick peruse revealed plenty of general admission 3-day passes for $100-$150. Those prices will drop later in the afternoon as folks want to make their way in for headline acts this evening.

The fastest and cheapest way to score tickets is to go hangout by either of the main entrances. Have the max amount of cash you’re willing to pay in hand, and there will be plenty of folks trying to enter who either bought an extra ticket or had a friend flake out at the last-minute. They want to go in and are now motivated to move that ticket for a fraction of its face value. 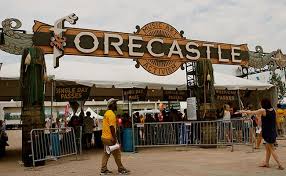 Forecastle is big business in Louisville. An estimated $20 million is expected to be pumped into the local economy this weekend, which is impressive considering it’s not that large an event. It usually draws 60,000 people over three days, which is about the size of a single football game crowd.

With some 65 percent of festivalgoers traveling from out-of-town, hotels, restaurants and drinking establishments, especially in the downtown area, will be packed all weekend.

It will be interesting to see the attendance figures for 2017 Forecastle. Many festivals this year are seeing a lag in attendance figures that industry observers have characterized as “festival fatigue,” resulting from a oversaturation of the genre with duplicative events and overlapping talent. 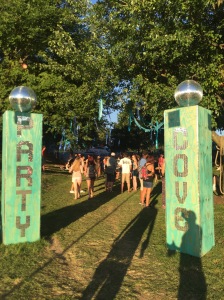 Make no mistake, Forecastle is no Lollapalooza, Bonnaroo, or Coachella. It can’t offer that level of star power, but it’s the biggest musical event in Kentucky, and because crowd size and talent costs are kept lower, Forecastle is amenity-laden and the organizers take kind care of attendees.

For high schoolers and college cool kids Forecastle is a proverbial no-brainer. It’s summer, the sun is shining, music is playing, liquor is abundant, and there are hotties of both sexes scantily clad everywhere. Forecastle is a party and a hook-up waiting to happen.

For those 30 and up additional variables must be considered. There is a big chunk of Forecastle attendance that is above 30, that has discretionary cash to afford higher-priced tickets, but they have competing interests for their weekend attention.

The 2017 lineup is not an immediate eye-catching affair. There are moments of gratuitous excitement, like Bowling Green (KY) natives Cage the Elephant on Friday at 7:45PM on the Mast Stage. That will be a hot, high energy set. There’s also Odesza, Run the Jewels, GRiZ, and Waka Flocka Flame, but it’s spotty across all three days. 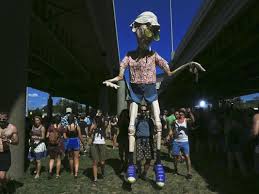 I’m particularly interested in the Saturday night headliner, LCD Soundsystem. Never had a chance to see them and love how they cook up their layered sound with actual instruments into a frenzied dance scene. Other notable acts Saturday are Kentucky’s Sturgill Simpson, Nathaniel Rateliff & The Night Sweats, Ages and Ages, Phantogram and Vince Staples.

Attending Sunday is always rough, as the heat eventually starts to take a toll, there’s never enough sleep, and the Monday workday will come early. That does not help possible attendance for Weezer, who will close out the Fest. I was unimpressed by their performance at Voodoo Fest in New Orleans, finding them pretentious and sophomoric. You be the judge.

I would put my money on Spoon delivering a memorable set. Also watch out for PJ Harvey, Charles Bradley & His Extraordinaires, Foxygen and STRFKR.

What I will say about this lineup, and this holds true at every Forecastle to their credit, the talent managers do an excellent job of selecting the early and mid-level bands. Inevitably there will be acts you’ve never heard of that deliver mind blowing sets. Do a little homework beforehand checking out the bands and open yourself to unexpected experiences. It will serve you well. 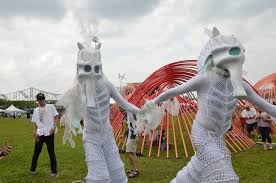 For the uninitiated, Forecastle is a visual treat. There are plenty of folks wearing themed costumes, and giant puppets are regularly traipsing across the grounds. There’s plenty of native Kentucky spirit to sample in the Bourbon Lodge, and feel free to channel your inner Hunter S. Thompson at the Gonzo Bar. If the heat gets too much take a dip in the canal waterways, or get super freaky between sets at Party Cove.

For those still desiring tuneage after the stages have gone dark Friday and Saturday night check out the Forecastle late shows at Headliners, Mercury Ballroom and aboard the Belle of Louisville. They all start around midnight.