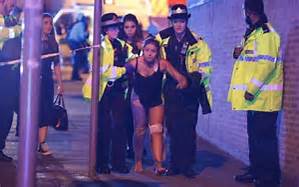 The blast at Manchester Arena occurred around 10:35 PM in a foyer outside the main performance space. Making this a particularly disturbing attack was many in attendance were young girls and mothers accompanying their daughters, sharing in the American teen-pop sensation’s concert.

Reports indicate a suicide bomber detonated an improvised explosive device that took the perpetrator’s life. Police are treating this as a terrorist incident, and the Islamic State did claim responsibility for the attack today.

It’s of growing concern that these types of soft targets have become a routine strategic target for terrorists. Aside from the carnage of the explosion itself, the Manchester Arena seats 18,000 – a blast of this nature creates a secondary catastrophe as crowds tend to stampede toward safety. It’s unknown yet, but speculation is some of the fatalities resulted from the storm of humanity trying to exit the arena in panic.

It’s sad that we have reached a point in the civilized world that death is a possibility when attending large public celebrations, sporting events or concerts.

I’m going to a highly political performance Sunday in Louisville featuring Roger Waters from the British psychedelic band Pink Floyd. Myself and three blokes from college are carving out time from our busy family lives to take in one of our favorite groups from back in the day. Unfortunately we will have to make a plan for where to meet in case of a terrorist incident.

Ariana Grande was not injured in the attack, but she has put a hold on the rest of the European dates for her current world tour. A message posted on her Twitter account read, “broken. from the bottom of my heart. i am so so sorry. i don’t have words.” That message has since been re-tweeted more than 1 million times.

British Prime Minister Theresa May spoke eloquently Tuesday on the bravery of emergency personnel and of the people of Manchester. May stated the attack stood out for its “appalling, sickening cowardice” in the way it had targeted “defenseless children.”

President Trump condemned the attack speaking in the West Bank city of Bethlehem, referring to terrorists as not “monsters,” because they would like being identified that way, but instead termed them “losers.”