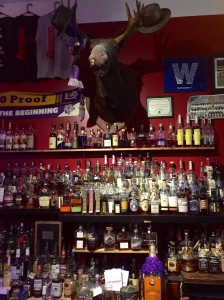 After a particularly soul crushing day of corporate consulting, I wasn’t prepared to immediately hop on the expressway for the evening commute home. I had too much anxiety and aggravation built up. These demons needed exorcising first, otherwise I risked returning home, where I could easily transfer my angst onto unsuspecting family members.

Besides it was Kentucky Derby Eve Eve or the day before the Kentucky Oaks. I wasn’t attending any of the actual Derby events so Thursday was an excellent evening to soak up the festive atmosphere around Louisville and catch some Derby pre-gaming as most folks flowing into town for the races arrive by Thursday. In fact Churchill Downs now officially markets its Thursday meet schedule as Thurby. It’s more of a locals day to have an inexpensive opportunity to take in the sanctity of Churchill Downs with the Derby energy in the air but without the crowds or cost.

I will add it had done nothing but rain all week, so it was a gray, damp and cool day – one that only a strong glass of bourbon could chase away. My go-to joint in Louisville for  a curated selection of fine bourbon is the Haymarket Whiskey Bar. As they like to say it’s “the only spot on the Urban Bourbon Trail that boasts a bar, bottle shop, arcade, and concert venue.” 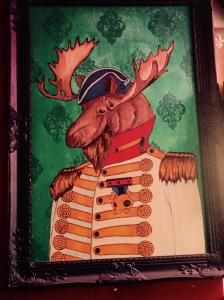 Located in the East Market District of Louisville, just under the I-65 overpass away from downtown, the Haymarket is in the heart of NuLu or New Louisville. This neighborhood has a city-in-transition feel, as many of the old buildings and deteriorating warehouses are undergoing historic restoration projects. Green is the buzz over here, from architectural standards to casual and upscale restaurants offering local sourced and organic offerings. It’s definitely hipster friendly, and the bars, restaurants, antique stores, galleries and specialty shops offer a nontraditional Louisville feel.

The building in which the Haymarket resides was erected in 1885 and sits at the easternmost edge of Louisville’s Whiskey Row, across from what was an outdoor farmer’s market established in the wake of the Civil War known as the “Haymarket.”

Walking inside the bar gives off the feel that it has been around for decades, with its dark worn wood, residue-encrusted apothecary bottles and olde world bourbon advertising painted on the walls. But then there are the X-Wing Fighters and alien pop-art interspersed that brings us back to the current century.

In the five years since opening the Haymarket has established itself as having the best selection of whiskey around, with upwards of 400 different varieties, some 250 of which are dedicated to bourbon, along with the city’s largest assortment of private barrels. It’s a collection really, of potent libations, for both deep and shallow pockets, from mainstream offerings to some of the rarest whiskey available. It’s all crammed in here together to make the Haymarket one of the best bourbon bars in America.

I’m only agreeing with publications such as Esquire, TIME, Garden & Gun, Men’s Journal, Travel + Leisure, Southern Living and countless others. For those coming into town to do some bourbon tourism, if the Kentucky Bourbon Trail has you out in the countryside visiting Kentucky’s famed distilleries, staying in Louisville gives you access to the epicenter of the Urban Bourbon Trail. This is where the end product from those fine distilleries may be sampled in comfort. It’s comprised of some 35 restaurants and bars that must offer a minimum of 50 bourbon selections on their menus, of which the Haymarket is a proud member.

On this particular Thursday before the Kentucky Derby, it was not surprising to see four middle-aged guys from out-of-town getting their drink on. They were spending some cash, drinking glasses of Pappy Van Winkle Family Reserve 20-year old. It retails for around $169.99 a bottle if you can find it. In reality it could cost $2000 from a private seller. A glass of it runs between $20-$40 in a bar – don’t pay more.

Here is why I love the Haymarket. When these geeked tourists eventually turned to their knowledgeable bartender belatedly to ask his opinion of their liquor conquest, he told them in deadpan honesty that he wasn’t a fan of Pappy. This caused their brain gears to grind to a stop. How could there be anything but accolades for this highly touted selection?

Don’t take this the wrong way, all the Pappy offerings are fantastic sipping bourbons, and those labels with the help of Sazerac/Buffalo Trace have marketed this nectar into rarefied air. What few bottles do become available each year vanish, and a premium price is paid for them on the secondary market. Pappy Van Winkle has become legend. Scarcity from quality is a beautiful reputation to have in any industry. 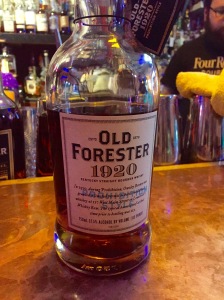 But when you take into account its ingredients, mash bill, aging and flavor profile – there are several wonderful bourbons to match Pappy’s presence and depth that do not require chasing its release date, having to wait outside overnight at a Liquor Barn in the rain, and doesn’t cost $40 or more per glass.

Welcome to the Haymarket Whiskey Bar, a unique punk rock fine drinking establishment, where tattoos and depression era facial hair are prevalent. It’s a place to try that bourbon you’ve only heard rumors about. You may have a favorite label for special occasions, well this is the joint to put that brand to the test against whatever the house recommends will blow your hair back.

I came out strong from the gates ordering a Michter’s American Whiskey, 83 proof, aged in bourbon-soaked American white oak barrels, and smooth all the way down.

Next up was Old Forester 1920 Prohibition Style. This is the latest in Brown-Foreman’s “Whiskey Row” series. It is a stout beverage at 115 proof, but opens up nicely over ice. It looks like iced tea and drinks that way too.

For my third entrant I went with Maker’s Mark Private Select at 111 proof. This recipe is based on the Maker’s 46 formula, fully matured at cask strength, with 10 custom finishing staves added to each barrel to extract more flavor. These can be any combination from five different flavor profiles, meaning there are more than 1,000 combinations, to offer a customized finish and unique taste profile. It’s infinitely Maker’s, but brings a richness in-depth without the burn. The 10 flavor staves for this particular bottle were: (1) Baked American Pure 2; (3) Seared French Cuvee; (4) Roasted French Mocha; and (2) Toasted French Spice.

I probably should have gone home at this juncture of the evening, but we were solving the world’s problems and smoking Parliament cigarettes in the throughway as the rain fell. These beverages had definitely helped melt away the morbid work day. It only seemed logical that a fourth would improve things even more.

For this glass a private barrel from Four Roses was selected. It was the OBSF recipe (denoting the specific mash bill and yeast strain used) from the distillery’s “Icons of Whiskey” series that is composed of 10 different bottled recipes. The OBSF was aged 11 years + 8 months, from a single barrel, bottled at barrel strength (58.1 percent alcohol) and weighing in at 116 proof. This is a big bourbon, very yummy. I had to laugh as I noticed on the label a printed take off of a Grateful Dead lyric stating, “The bottle was dusty but the liquid was clean,” from “Ramble on Rose.”

I closed out with a local favorite, Heaven Hill Old Style Bourbon – Bottled in Bond. This is a solid table bourbon. It’s aged 6 years, bottled at 50 percent alcohol and 100 proof. It’s not going to change your life, but at $12 a bottle it doesn’t break the bank either.

Those five glasses of whiskey cleared away all that illed me. Not that I needed it, but the Haymarket does offer an impressive menu of packaged bottle service available, so one can take some serious potency home for later consumption.

Expect a bunch of service industry folks, kitchen staff, waiters, hostesses, bartenders from other establishments, along with locals, hipsters, University of Louisville students, connoisseurs and booze travelers at the Haymarket. This is the exact collection of humanity signaling I had arrived at the right place to imbibe. This is a drinking establishment on a serious level, just try to play responsibly. The contents of these bottles bites back.