Sleeping with the Fishes at Georgia Aquarium

My main purpose for being in Atlanta was to attend the Radiohead concert Saturday night, but with six hours till showtime I wanted to explore a small corner of what this impressive city had to offer.

Factoring in that I was pre-gaming for the show throughout the day, there was no way my vehicle was exiting the hotel parking lot. It was a gorgeous day out and warm. My best call was to remain walkable around Centennial Olympic Park. There was eye-candy aplenty here with: The Georgia Dome, CNN Center, Philips Arena (where Radiohead would be playing), Skyview Atlanta, the Georgia World Congress Center, the College Football Hall of Fame, and let’s not forget Coca-Cola. 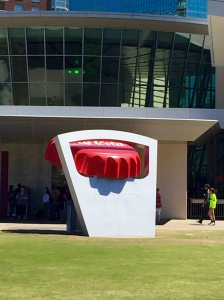 “The Real Thing” has a huge presence in Atlanta even to the casual observer. I had no clue Coke was invented there in 1886. That explained a lot. Good luck finding Pepsi products. But for those wanting to know more, the World of Coca-Cola is a museum devoted to the history of this influential beverage. Together all of these enticing buildings made for an impressive view, but none piqued my interest like getting a chance to see whale sharks at the Georgia Aquarium.

Local businessman and Home Depot co-founder, Bernard Marcus was the inspiration behind creating this groundbreaking attraction. The land in the Centennial Park District was donated by the Coca-Cola Company and Marcus put $250 million behind creating the readily identifiable blue-metal and glass exterior building. It’s design was intended to evoke a giant ark breaking through a wave. 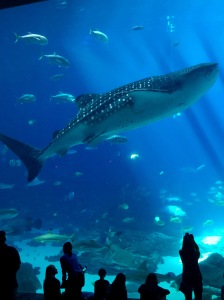 Inside awaited tens of thousands of fish and other sea creatures, and hundreds of species. Besides the whale sharks, the other notable critters are beluga whales, bottlenose dolphins and manta rays. Though a non-profit, admission is not cheap. Expect to pay around $40 unless taking advantage of the advance purchase, early bird or evening discounts. Expensive or not, some 2.2 million people come through the Georgia Aquarium yearly.

Once inside it feels a bit like a movie theater. There is a central lobby where everyone enters before selecting one of the five feature galleries to wander: Tropical Diver, Ocean Voyager, Cold Water Quest, River Scout and Dolphin Tales. Each corresponds to a specific environment and LED signs advertise the start times for the next performances or feeding times. 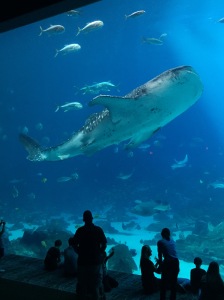 This is the only aquarium outside Asia that houses whale sharks. The natural light reflecting down through the brilliant blue water creates a calming aqua-hue in the viewing area. Thousands of different species of fish and other creatures can be seen swimming about at different depths – then a whale shark cruises past and it makes one to pause. It’s the size of a bus, yet moves in such a majestic fashion, gliding slowly through the water. At over 40 feet in length and 20-plus tons, these magnificent creatures have presence.

It took planes, trucks and boats to deliver the original four whale sharks to Atlanta from Taiwan. Amazingly, these enormous beasts were going to be eaten had the aquarium not purchased them, after having been captured in Taiwan’s annual fishing kill. Two died in 2007 but that same year the aquarium received two more whale sharks, just before the ban on capture of this species took effect.

Swooping through this same exhibit is a full-sized manta ray. This is the first one on display in the country, and the Georgia Aquarium is one of only four sites in the world displaying such a creature. With a wing span of more than 15 feet, this manta ray was accidentally caught in nets protecting the South African coast from sharks. It has been part of the Ocean Voyager exhibit since 2008. 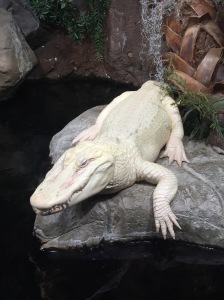 The viewing windows throughout are amazingly large, offering unparalleled observation. Still, the scene stealer is the 100 foot underwater tunnel, allowing visitors to walk or ride a slow-moving conveyor belt with panoramic views as whale sharks and rays peruse this barrier reef system.

I next took a stroll through River Scout, with its overhead river allowing one to see North American fish from the bottom up. It contains an eclectic mixture of freshwater species. An albino alligator kept a close watch on passers-by, and a gang of otters unintentionally put on a performance as their cuteness won hearts and minds. In addition to local specimens, this exhibit displays piranha, electric fish and other unusual freshwater life. 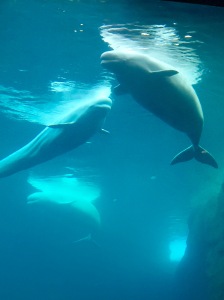 Moving on to the second largest habitat (after Ocean Voyager) is the Georgia Pacific Cold Water Quest. This features animals from the polar and temperate regions of the world and contains most of the mammal species in the aquarium’s collection. Five beluga whales are the big draw. There is something hypnotizing about how these mammals move, with their taught pale skin against the blue water, and bulbous heads. They are striking to observe. Ranging from 11-15 feet, these beautiful creatures can weigh 2,500 pounds. This was also the spot to see Japanese spider crabs, sea otters, African penguins and barking seals.

Thirteen bottlenose dolphins are housed in the AT&T Dolphin Tales gallery. This is the aquarium’s newest addition, opening in April 2011. I didn’t take in the show, but there is a dolphin auditorium for performances. 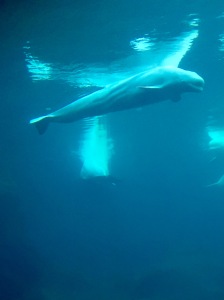 The fifth exhibit is Tropical Diver presented by Southwest Airlines. Here a massive living coral reef is on display. Waves go crashing overhead as the surf churns up life surrounding the reef. The aquarium does a nice job of maintaining an ocean-themed soundtrack across its facility that makes visitors feel all the more as if they are residing underwater with these magnificent creatures. Other animals in this gallery include sea horses, garden eels, jellyfish, clownfish, shrimp, lobsters, turkey fish and many other tropical fishes.

I was blown away by the Georgia Aquarium. It’s a most pleasant place to submerge one’s self and forget momentarily about all the outside interference that clutters our modern lifestyles. Of course the exit is through the considerable gift shop. A stuffed river otter and pink leopard seal came home with us. Along with a necklace of blue plastic dolphins that light up in several LED modes from strobe throbbing to slow flashes. This was a key purchase to bring along to Radiohead later that evening.

Make a point to visit the Georgia Aquarium. A world of underwater life is waiting for you. Dive in and explore.