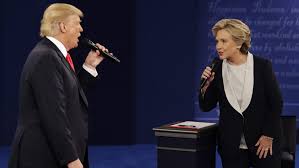 In the second of three scheduled presidential debates, Donald Trump declared that Hillary Clinton had “tremendous hate in her heart,” in regard to her describing his supporters as sexists, racists, xenophobes and Islamophobic.

Hate in her heart? This is a woman who has worked the majority of her adult life in public service advocating for the underserved. It’s true Clinton uttered the comment that half of Mr.  Trump’s  supporters belong in a “basket of deplorables.” That was an unfortunate characterization, and the number is exaggerated, but not untrue.

It’s Trump’s supporters that include a vast array of white supremacists, white nationalists, and folks generally that are prepared to build walls in an effort to infringe upon religious freedoms and discriminate against foreign nationals.

That was the tone set in the second presidential debate. Trump cast a large shadow coming in due to his Access Hollywood recording going public, where he flaunted his fame as a means for assaulting women.

The first 20 minutes of this debate were some of the most uncomfortable live television I’ve ever watched. After Trump was dismantled by the more skilled Clinton in the first debate, combined with the Access Hollywood revelations, Trump entered the contest prepared to be more aggressive and less civil. Obviously his lack of knowledge on issues precluded him from engaging his rival in substantive discussions. Instead he took the low road of tossing about innuendo and injecting offhand commentary as a way to nullify the elephant in the room regarding his sexual indiscretions.

Feeling that Trump was attempting to gloss over the topic, CNN moderator Anderson Cooper asked Trump, “You bragged that you sexually assaulted women, do you understand that?” Sadly, I’m betting Trump justifies his behavior and doesn’t think he did anything wrong.

Many Republican advocates felt he won the second contest, whereas I found he just didn’t suck as much. Trump was more focused throughout this 90 minute session, but more importantly to his core constituency of “deplorables,” he stood face-to-face with Clinton and attempted to prosecute her for anything and everything.

He even threatened that upon winning the presidency, he would dispatch a special prosecutor to review her circumstances and have her put in jail. Of course he has no authority to do this, but that never seems to matter to Trump or to his deplorable following.

The problem with this strategy was Trump raised nothing new. All of these allegations have been reviewed extensively by either congressional oversight, special select congressional committees or the FBI no less. There are no charges to file because there is no evidence to prosecute a case.

Trump can be as boorish and insulting as he chooses, none of that stops the damage he has inflicted upon countless women from his sexually predatory behavior. In the debate Trump attempted to skate away from his recorded commentary with Billy Bush by characterizing it as “locker room banter” and that he never acted on such behavior. Since then at least nine women have come forward to say they were touched inappropriately by Donald Trump.

I thought his demeanor and presence on stage spoke volumes for what the man is capable of perpetrating, as he refused to be seated when Clinton spoke. Instead Trump menaced her, hovering behind her as she addressed questions, looming closely over her shoulder as a means to intimidate.

Considering the debacle that has become the Trump campaign, Clinton played it safe and let the Republican nominee dig his own grave. She maintained an air of grace and poise, choosing to conduct herself in a presidential manner, which she did with style. It would have been impossible to counter all the lies spewed by Trump and instead of taking that bait, Clinton stayed to the issues and out of the gutter where the Trumpster trolls.

Today’s national polls show Clinton has a  nine-point advantage, with inroads being made into traditionally red states like Georgia, Utah, Arizona and even Texas. Tonight’s third and final debate taking place in Las Vegas at UNLV’s Thomas & Mack Center is The Donald’s last shot to change the narrative on this campaign.

He seems content to complain erroneously about how the election is rigged against him. That distractive noise, while dangerous and possibly inciting violence, fails to take away from the Republican nominee being a useful idiot that serially abuses women.

As President Obama so eloquently put it yesterday, “I’d advise Mr. Trump to stop whining and go try and make his case to get votes.”

I don’t envy Chris Wallace, the Fox News host who is tonight’s moderator, as Trump likely will employ a scorched earth strategy to try and throw Hillary off her game. The Republicans are past just needing a Hail Mary pass to win. Trump needs help from Clinton to bring her down, and that’s not likely to happen.

Short of that, the 2016 elections are shaping up to be a landslide set of victories for the Democrats. Steve Schmidt, a Republican campaign strategist who worked on Senator McCain’s 2008 presidential bid, noted that the magnitude of the electoral catastrophe upon Republicans cannot be overstated.

When asked about the over/under on the electoral college victory for Clinton, Schmidt said, “I think she is trending over 400 (with 270 needed to win); Democrats take the Senate; If this election were today I think Republicans are down 25 seats (in the House), with the trendline going in the wrong direction.”

Schmidt added, “The panic is beginning.”