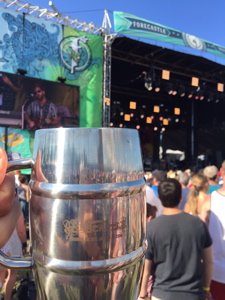 Sipping bourbon and lemonade as Dan Auerbach and The Arcs played.

Honest truth, I wasn’t planning to attend the 2016 Forecastle music festival. Several of the scheduled headliners played Louisville recently, and the bottom of the lineup wasn’t swaying me to spend a valuable weekend sweltering under an overpass.

My plans changed after a pair of VIP passes were kindly offered by my good friend Dennis for Saturday and Sunday. I’m going to say right at the start, once you go VIP there is no going back. It’s simply a more pleasant way to attend such an outdoor event.

The big sell here was climate control. I can’t overstate the recovery impact a few minutes of air conditioning made on the entire weekend. It was hot folks, sweltering. Inside the VIP Lounge it was cool and dark, with funky colors and party treatments throughout. A full service bar had short lines and served ice-cold bourbon slushies.

The lounge was the hub of the VIP world and centrally located on a rise left of the Mast main stage area. It was a bustling spot, as folks were rolling in to cool off after shows as others were getting their drinks straight before heading off to hear the next set. It radiated fun and positive energy. There was a surprising amount of networking going on. Many of Louisville’s elite, entrepreneurs and oddities all shared amenities with one another for three days. It had a progressive vibe, and expensive festival fashion was on full display.

I would be remiss in not mentioning the bathrooms. There were two air-conditioned trailers parked on the expansive patio surrounding the VIP Lounge. They were large, clean, had functioning sinks and beat the hell out of a port-a-potty.

I can already hear folks scoffing about how this was no way to attend a music festival, and there is a certain merit to that. Regardless, I played hard same as always from this privileged vantage point. The primary benefit was having a recovery crash pad for in between sets instead of camping in the warm shade beneath trees or the expressway. 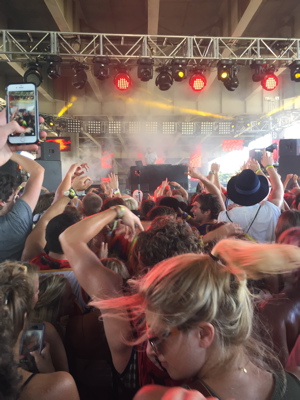 Amenities aside, there was music at Forecastle, and VIP access provided reserved field sections for easier viewing on the Mast main stage and Boom stage. We opened festivities Saturday with The Arcs around 5PM. This was guitarist Dan Auerbach’s side project while off from the Black Keys. It was good not great. The Mariachi Band aspect was compelling. Inevitably I  found myself hoping a Black Keys’ concert would break out.

With artificial energy coming on I headed for the Ocean stage under the overpass for Hudson Mohawke. It was bombastic and those who attempted to drink their way through an already brutally warm day reacted poorly to the intensity and heat generated from manic EDM enthusiasm.

It was between the close of this set and All Them Witches kicking off on the WFPK Port stage that I made my favorite discovery of the weekend, Party Cove. In the valley between tree covered hills, a yacht was placed on blocks at the far end. Artists spent three days painting the hull with funky designs, as DJs spun tracks on the upper deck and scantily clad mermaids jiggled to the beats. 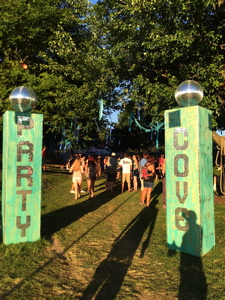 Below was carnage on the highest order. There were disco balls hanging from the trees and streamers, beach balls, costumes and lots of smoke (dry ice and otherwise). The revelers in the valley were completely splashed on God knows what, but all had far away eyes. I stumbled upon this hot mess at 7:45PM in broad daylight. I had to chuckle and took a seat in the grass to observe the madness.

All Them Witches had talent but spent the entire set muddling about, never making a point. I departed early and waded into the water canals to splash some liquid over my body and cool down, then made my way over to the Alabama Shakes. Intense emotion on display with these cats, but too soulful to give me the energy needed in a closing act as the hour grew late. 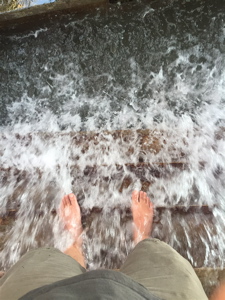 We headed back to my friend’s for sleep, but I got none. Gary Clark Jr. was in the house Sunday, and I was itching to worship.

After some serious pre-gaming, our crew arrived at Waterfront Park around 3PM, just in time for the Heartless Bastards. They were better than advertised, and their tune, “Down in the Canyon” was amazing.

[HEARTLESS BASTARDS | Down In The Canyon]

I stuck around for White Denim at 4:45PM. They were killing it, but the bell tolled for Gary Clark at 5PM.

Not a cloud was in the sky and the sun pounded the open field. VIP or not, the only option was to wade out into it and suck up the heat. Dressed all in black with a white fedora, the Austin, Texas guitar slinger menaced the stage as he slowly worked up the opener, “Bright Lights, Big City.”

If Samuel L. Jackson played a musician, Gary Clark Jr. was looking the part. The drummer kept a close watch on the guitarist, appearing to be fearful for his life if he missed a beat. 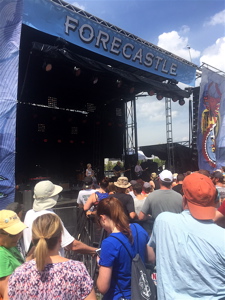 The Heartless Bastards perform on the Boom stage Sunday.

The band was tight and they delivered what I would consider the set of the festival. Folks tend to gloss over how rare it is to find a blues guitarist with the magnitude to break out of the blues circuit and cross over to the massive alt-music festival scene. Stevie Ray Vaughan and Jimi Hendrix. That’s the list. It’s like finding a purple unicorn.

Gary Clark Jr. is just that bad a man.

I didn’t envy Death Cab for Cutie having to take the stage next but they got their crowd installed and played clean, with passion. It was a set where Maia and I were content to sit on the pavilion by the lounge above the crowd. There you could listen, see the video screens and a slight breeze was available. The big song for me to hear was “I Will Possess Your Heart,” which got me running down onto the field. That was a huge tune to witness live.

[DEATH CAB FOR CUTIE | I Will Possess Your Heart]

That’s about it. There were a few surprises along the way: Unknown Mortal Orchestra, Blackberry Smoke and Femi Kuti & The Positive Force. Someone was always playing that was worth checking out, but it was thin, and in the heat, the lineup started to lose its zest by late Sunday afternoon. 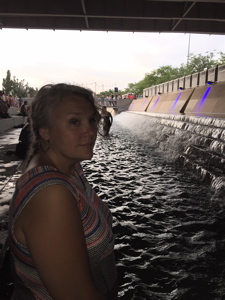 Maia catches some shade and cool water before we made our exit from Forecastle 2016.

It had been a long pull, 42 straight hours up. It would soon be Monday morning, so we made the call to skip the festival closing performance from Ryan Adams. I’ve seen him. The guy has a massive catalog, but ain’t the most cheery bloke, and he has a distinguished reputation for not playing what you want to hear anyway. We took a final dip in the water, heard a bit of Brandi Carlile in the 8:30 slot on the Boom stage, then headed out.

Again, our friends and the VIP passes made the weekend, the music was acceptable. I wish Forecastle would look at bringing more uptempo bands to play. This profile of hipster, Emo, vintage, shoe gazing, loner-rock, with a sprinkle of adrenaline, makes it hard to maintain energy. Crank the intensity up just a little and all would be most excellent.