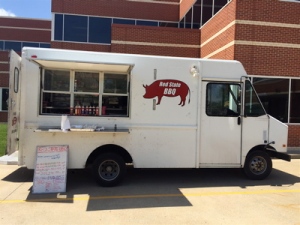 Earlier in the week an e-mail from my bank alerted me that some buzz-worthy barbecue would be available in town from 10:30 AM to 2PM, so I made a mental note to make sure to check it out.

I about blew my chance by not arriving until almost 1:30 PM. My daughter Isabella and I were warmly greeted by Erick James, the food truck manager, but as we began to look at the menu he let us know that the lunch crowd had picked him pretty clean.

The only thing remaining was a generous portion of chicken for one sandwich. Chicken is not what I’m usually looking for when eating barbecue, but I thought why not give it a try. It’s easy to impress with ribs or pork, but chicken is another matter. It often ends up dry and lacking a distinct flavor, which was not the case here.

Red State BBQ was founded in 2010 by Scott Ahlschwede, an equine vet and Texas native, who was a pretty fair grill master as well. He simply was looking for a decent place to get some barbecue and have a beer. Until recently central Kentucky has never had a rich barbecue tradition, so Scott took matters into his own hands. 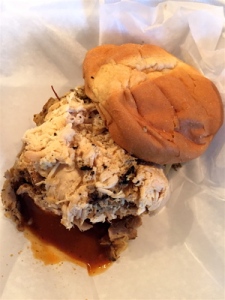 Luckily he found the old Sunset Motel on U.S. 25, with its Sunset restaurant out front. This turned into the perfect little roadside joint for offering smoked pig, chicken and beef. Red State is Kentucky Proud, and offers ice cream from Sav’s Chill in Lexington and local craft beers from Country Boy, West Sixth and Kentucky Ale.

As for the name, it came about from a rather astute observation one election day when the owner commented to a friend about noticing how all the good barbecue comes from red states… That is most definitely true. It’s a Southern tradition.

At Red State’s Frankfort stop they went through 40 pounds of pork, 30 pounds of brisket and 15-20 pounds of chicken. That’s impressive for a lunch-stop at a bank outside the city center. While I was standing there talking to Erick folks kept showing up, some coming back for more.

It’s easy to understand why. The chicken sandwich was outstanding – moist, succulent and full of flavorful. Red State makes all their own sauces and I selected their Kentucky Small Batch sauce to compliment my chicken that added a welcomed tang to the sandwich.

You will not find any barbecue here drenched in sauce. Usually that is a trick to cover up something, whether it’s less quality meat or a subpar flavor. 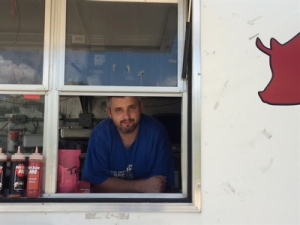 “Red State smokes its meats anywhere from 11-14 hours, with the intention that the flavor in the meats is what we want people to taste first and foremost,” said James.

And that flavor jumps right out from the first bite. Erick had me at hello when he started describing the double smoked brisket Red State offers at its restaurant location. It remains difficult at best to find respectable brisket this far north. I’m thinking of getting in my car today to drive over to Lexington for a sampling of Red State’s double smoked brisket, and try a hunk of their homemade peach bread pudding for good measure.

Democrats, don’t get thrown off by the name here. This barbecue is tasty enough to earn bi-partisan support and win over the most polarized skeptics.

[For anyone in search of other quality beef brisket in the Lexington area, give Brooks BBQ No.2 a try. It brings some Alabama spiciness to the Bluegrass. Doc Crow’s in Louisville also offers respectable brisket, but is a tad fancy for my barbecue taste.]