Galactic Rocks the Lyric in Lexington

New Orleans funk jam pioneers Galactic made a tour stop at the classic Lyric Theatre on E. 3rd Street in Lexington Wednesday night. I was desperately due for a dose of Big Easy flavor, but was unsure what to expect at a show like this with assigned seating.

Galactic is a free flow vibe ensemble that tours a lot. I’m use to their infamous Tipitina’s shows in New Orleans, where the floor is open for dancing, the drinks and other temptations are liberally consumed and everything cooks up into a beautiful mess sometime after 3AM.

That wasn’t going to happen here, but I’d settle for an inspired performance, from the band and the crowd.

Galactic puts on a unique show. It has a jazz base, that is rocked up with guitars, bass and keyboards, then set off with New Orleans style brass. They hit a funky groove and blow it up. 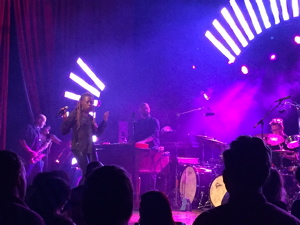 Most Galactic songs are loop-centric. The arrangements are intricate, showcasing each members’ talents, but often revolve around a central idea, and no matter how much riffing may go down, and there will be a lot, the songs always return to their central beat.

You’ll know you’ve been to a Galactic show when two or three days later some mysterious beat infects your brain and after mindlessly humming it for hours you realize the band is responsible for this invasion of privacy.

The idea is to push artistic boundaries, and band members Ben Ellman, Robert Mercurio, Stanton Moore, Jeff Raines and Rich Vogel have been at it since 1994. Part of how that is achieved is by bringing different voices into the band.

One is trombonist Corey Henry, who formed the Lil’ Rascals Brass Band and continues as a member in the Rebirth Brass Band. Since Hurricane Katrina Henry has been adding a decided NOLA hip hop flavor to Galactic’s lineup.

But you will notice I’ve mentioned several different musicians without discussing a vocalist. Galactic likes to rotate different singers in to shake things up and stimulate creativity.

The last couple years Corey Glover from Living Colour fame has handled the microphone duties. Currently Galactic is touring behind its 2015 release, “Into the Deep,” where Macy Gray, JJ Grey and Mavis Staples made guest singing appearances. At the Lexington show New Orleans vocalist Erica Falls took command, who has performed with Sting, John Fogerty and the late great Allen Toussaint. 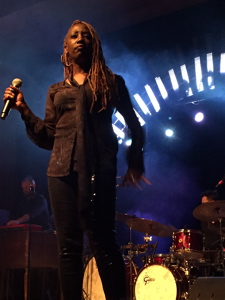 She prowled the stage with her confidence, sporting black leather and long dreads, but it was her powerful voice that sealed the deal. Ms. Falls could blow your hair back man.

Honestly I was really proud of Lexington at this show. On a dreary, cold evening, the concert was nearly sold out and the crowd was up standing before the band even took the stage, giving off plenty of positive energy. There were folks grooving up and down the aisles and throughout the venue the entire evening.

This was the first time I had been to the Lyric and it was fantastic. The acoustics were bright, the seating ample and it has a pleasing minimalist decor. There isn’t a bad seat in the joint and the beer and wine was flowing.

We had fifth row seats off to one side, but midway through the show we strolled up to the front of the stage without a problem.

Galactic did their thing and left everyone screaming for more. What more could I want on a rainy Wednesday in Lexington.