Posted on April 8, 2016 by theurbanllama 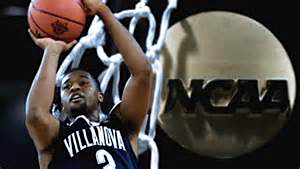 Priceless – that is the word that comes to mind after watching the conclusion of the men’s NCAA National Championship basketball game Monday night.

With 5 seconds left, North Carolina guard Marcus Paige completed his team’s comeback from a 10-point deficit by hitting an off-balance, double clutch 3-pointer under duress to tie the game at 74.

The crowd at NRG Stadium in Houston was hesitantly quiet as Paige’s improbable shot made its way to the basket, and then bedlam.

Mr. Basketball himself, Michael Jordan, could be seen standing with arms raised, resplendent in his Carolina blue, mouthing the word, “BOOM!”

The Carolina faithful thought overtime was a guarantee, but this game would finish the only way it could – the last team shooting wins.

With 4.7 seconds remaining the ball was inbounded to Villanova senior guard, Ryan Arcidiacono, who raced up the court. Fellow Villanova senior Daniel Ochefu set a decisive screen on Carolina’s Joel Berry II, forcing the defender to Arcidiacono’s left side, and out of position.

Everyone assumed that Arcidiacono would take the shot. He’s a senior, had scored 16 points on the night and is the heart-and-soul of this Villanova squad.

But the kid listened to his basketball instincts and ultimately became the foil of North Carolina’s title aspirations.

Crossing mid-court, Arcidiacono cut right and headed for the top of the key. With UNC’s Berry still pursuing, Arch drew the other Carolina defender, Isaiah Hicks, as both anticipated a shot.

The trap had been set and now it was sprung.

Arcidiacono shoveled the ball right to an open Kris Jenkins as both defenders were now out of position. “Big Smooth” as he is known, caught the ball in stride, took one step, then two and up it went from 3-point land. Swish!

This Villanova squad was built especially for college ball. They may not have a kid that can play in the NBA, but they knew their strengths and maximized them, were senior-led and played a poised brand of team ball.

Of particular note is their harassing style of defense, which saw them switching off players and schemes frequently, interrupting passing lanes, tipping balls and was opportunistic.

It clearly frustrated Carolina, who made a living off of fast break points and second chance opportunities around the rim. Neither was available Monday night. Villanova slowed the pace, walking the ball up the court, made sure they got a quality shot on each possession and blocked out North Carolina’s big guys.

It appeared as if Carolina kept waiting for Villanova to give up and wilt from the entitlement that “WE are North Carolina basketball and WE are supposed to win,” but these Philly Wildcats were too scrappy to cave.

Through the television coverage it was obvious there was a ton of additional outside pressure to win this game resting on the shoulders of the UNC players.

North Carolina is one of the five college basketball blue blood programs. They have five titles hanging in their gym. It was reported that 50-some former Tar Heel players, many NBA veterans, were in attendance.

His Airness himself was there looking on with the rest of the former players expecting a UNC win. Everybody in Carolina blue was ready to start celebrating championship No. 6, but they seemed to forget that the team had to win first, and that was a tremendous burden for those young men to carry.

You could see it on the face of Roy Williams when he looked up at the lock with 4:42 to go and the Heels were down 10. He knew the burden.

It was 31 years ago when the last Philly team won a title. It was these same Villanova Wildcats, coached by Rollie Massimino, who was in attendance Monday night along side his star player from that team, “E-Z” Ed Pinckney.

The 1985 Nova Wildcats played the perfect game in defeating Patrick Ewing and the mighty Georgetown Hoyas.

This 2016 edition took a page out of Massimino’s playbook in knocking off a big, talented North Carolina team. It was through discipline, fundamentals and good shooting that these Villanova Wildcats earned the throne as kings of the college basketball world.