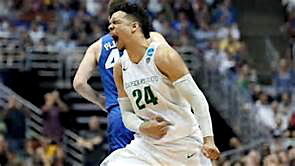 Dillon Brooks celebrates a big night where he had 22 points, 5 rebounds and 6 assists as Oregon slaughtered Duke.

The second week of the NCAA men’s basketball tournament cranked up again last night. Considering the volatility seen throughout college basketball this year it was not surprising the first two rounds were littered with upsets.

At least one game was won by a 9, 10, 11, 12, 13, 14, and 15-seeded team. Every seed except a 16 won at least one game in the first round, which means some big boys were sent home early, and the millions of people who fill out tournament brackets were dismayed as their sheets bled red with mistakes.

The big hit was Michigan State, the #2 seed in the Midwest, losing 90-81 to #15 seed Middle Tennessee State. That upset delivered a crippling blow to a majority of brackets filled out by the casual and expert better.

This was just the eighth win ever for a #15 seed over a #2. A significant number of people had MSU winning the entire tournament, but most everyone had them in the Final Four.

Combine that upset with #3 seed West Virginia getting manhandled by #14 Stephen F. Austin, #11 Wichita State over #6 Arizona, #13 Hawaii over #4 Cal, #12 Yale beating #5 Baylor, along with #12 Ark.-Little Rock beating #5 Purdue, and the first two days of action were brutal for the prognosticators.

You just can’t pick these upsets, and that is what makes the tournament such an exciting visual spectacle.

It showcases the elation that comes from upsetting high seeds, hitting the buzzer beating shots, and the gut wrenching pain of seniors coming out on the losing end knowing they’ve played their last games ever.

My Kentucky Wildcats, the #4 seed in the East, made what some consider an early exit from the tournament, losing to #5 Indiana 73-67 in the second round.

In reality UK was a flawed team that played in an even weaker conference than believed that simply got beat by a superior team.

Those in Big Blue Nation always look upon the cup as being half full when viewed through blue hued lenses. There actually was a starting senior in Alex Poythress on this team, but he tended to disappear in big games.

There was plenty of talent, led by sophomore Tyler Ulis, and his one-and-done backcourt mate, freshman Jamal Murray. Isaiah Briscoe is a bulldog rebounder for a guard, and the trio of Skal Labissiere, Marcus Lee and Derek Willis could disrupt smaller teams in the post.

It all sounds good in theory. The Bluegrass faithful drank Cal’s Kool-Aid, but what became obvious was none of the big fellas could produce much without a lot of help. They couldn’t guard true big men, fouled a lot and Indiana gutted them.

Kentucky was a jump shooting team predominantly, and could not reliably shoot free throws. Those kinds of deficiencies get a team beat in March.

Word is Calipari has the top recruiting class, again. A bunch of the current crop will move on, again, from Lexington to the NBA and a new crop of diaper dandies will show up, again, on campus in the fall.

There will be more senior leadership next time around in Dominique Hawkins, Mychal Mulder, Lee and Willis. But once again it takes the entire season to coach up the newbies at the college level in hopes they gel in time to face the tournament pressure.

Pardon me if I’m going to reserve holding my breath just yet.

Meanwhile, the third round of the NCAA is under way, and order has been restored.

Last night all the higher seeds won and won big. Villanova crushed Miami, and have thumped everyone in their path; Kansas pulled away from Maryland; and Oklahoma annihilated a Texas A&M team that shouldn’t have advanced past UNI in the second round – and it showed.

The biggie last night was Oregon trouncing Duke 82-68. It wasn’t even close. The Ducks had superior speed and firepower, in controlling the game from the tip. This aggravated Duke to no end.

This sets up Villanova vs. Kansas and Oklahoma vs. Oregon for trips to the Final Four.

Tonight the marquee game is #1 North Carolina against #5 Indiana. These two blue-blood programs are looking to make the Elite 8, and face the winner of Notre Dame vs. Wisconsin.

Virginia is the #1 seed in the Midwest and only high seed remaining. No telling how all that mess plays out.

Keep your brackets near, as the Madness will keep coming this weekend. Once the games are done Sunday the participants will be set for the Final Four next Saturday in Houston.