Posted on March 1, 2016 by theurbanllama 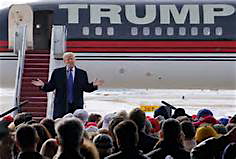 Everyone likes to be entertained, especially in politics, but what ceases to be amusing is when the likely nominee for the Republican Party can’t figure out to stay away from the KKK.

After David Duke, the former grand wizard of the Ku Klux Klan, publicly advocated that people should vote for Donald Trump, the GOP frontrunner failed to disavow Duke’s endorsement in several interviews.

The Donald is white-hot after winning the last three Republican nominating contests. With Super Tuesday today, he could be well on his way to locking up the GOP nomination for president – so why mess with things like failing to condemn the KKK?

Because the Donald can’t help himself. If he isn’t dominating news cycles, it’s perceived others are taking support away from him.

By doing things like not denouncing Duke and his ilk it guarantees stories related to Trump, or segments asking other candidates and pundits about Trump, will fill the airwaves.

This also could be construed as a strategic move by Trump. A predominance of the states voting on Super Tuesday are southern, and the appearance of white power acceptance could help secure those states for Trump, where whites compose a majority of the electorate in the Republican primaries.

Benito “Il Duce” Mussolini (left) with Hitler. Not the power duo you want to be quoting.

Adding to the KKK controversy for Trump was his retweet Sunday of a quote attributed to Benito Mussolini, the fascist Italian dictator.

Confronted on NBC’s “Meet the Press,” Trump acknowledged he knew the quote, “It is better to live one day as a lion than 100 years as a sheep,” was from Mussolini, but that he thought it was an interesting quote.

Mussolini would be the same dictator that was allied with Germany in WWII, and was captured and executed by firing squad in April 1945.

So in Trump’s world he doesn’t want to necessarily hangout with Adolf Hitler’s buddy, but it’s okay to quote him.

Combine these two recent incidences with Trump’s insistence to build a wall and ban all Muslims coming to America, and it’s not hard to see why the Klan and various other hate groups are gravitating to his candidacy.

Even if this messaging doesn’t sink Trump, tolerating white supremacy even for a minute gives the signal he is courting that voting demographic.

There already are several hate groups placing robo-calls in support of the Trump campaign in primary states that speak to protecting a dwindling white majority. It may not be with Trump’s direct blessing, but hold a mirror up to his supporters and we see visions of racial and religious intolerance.

There is a large percentage of Trumpinistas that still believe President Obama was not naturally born in the U.S., and is a closet-Muslim. But take a deeper look at Trump’s popularity and pair that with his messaging.

This isn’t just poor southern whites loving Trump. We’re seeing supporters across the spectrum that are latching on to his native-nationalism speak.

This is serving to illuminate a swath of racism in America hidden in plain sight. This would be people of means, that are educated, and generally wouldn’t display their latent racism, but because there is a major party candidate espousing this garbage it suddenly is considered acceptable to join the crowd.

Regardless of whether any of these current entanglements stick to Trump, by using quotes from former fascist enemies of the United States and not instantly squashing entreaties of support from the Klan, it calls into question the Donald’s credibility and judgment in terms of being commander-in-chief.

This may not disqualify him from running for president, but people should stop just watching the show and listen to this shameful candidate’s words.