Posted on September 10, 2015 by theurbanllama

Coming out of two runs over the long weekend I had serious body fatigue, but needed to get back out to plug in a weekly maintenance run in preparation for a 10-plus mile jaunt scheduled for Saturday. Last night I opted to run for the first time from my new office at the Kentucky Exposition Center in Louisville. There is always traffic when I leave work anyway, so if I change clothes and run from work, the traffic can bleed off and I get a smooth ride back to Frankfort.

The perimeter of the fairgrounds is about 3 miles, but a bit lonely. I put together a nice rolling 6 mile course that exits out Gate 4 and heads into the University of Louisville campus one block over.

There are several arching overpasses that allow car and foot traffic to swoop above the campus, taking you past Papa John’s Cardinal Stadium, where the U of L football team plays.

Going down Central Avenue there is a nice hill going up, with profiles of the football and baseball stadiums to observe, and Churchill Downs off to the left. Then I hooked a right on S. 3rd Street and over to Iowa Avenue, ironically, being I’m a University of Iowa grad two times over, where I picked up another bypass that takes you over and around the back side of Cardinal Stadium and dropped me in the middle of all the athletic structures for U of L. This offered another fat hill to climb.

There was a lot of energy on this course, which I appreciated. I had runners coming at me from U of L’s cross-country team, sprinting up the bypass hill, exhibiting huge leg strides and high knee lifts, as they tried to out-duel one another. They had the audacity to be smiling at the effort they were expending. As I was coming up the same hill from the other direction, I knew how much it was hurting me. They should stop showing off like that.

At the bottom of the hill, the Louisville marching band was practicing for their game this weekend. Around the corner the women’s swim team was out chanting and stretching before they began practice, and on the next block the goalie for the women’s soccer team was making a stand in-goal as one of her coaches smoked shots her way to block.

Even though I was training solo, coming through this neighborhood it was like I had a bunch of folks along with me on my run, and that made for an excellent distraction from my leg pain. For four miles I wasn’t thinking about my sluggish performance.

I came down S. Brook Street and hooked a right on Warnock and then a right on Crittenden, which brought me right back to Gate 4.

Sadly it was very quiet once back at the fairgrounds and all I had was my fatigued legs to ponder. It’s a deceptively long run around the back of the fair and exposition center, and it feels particularly empty. At one junction I was on an eight lane road with just me running down the middle. Airplanes were flying overhead left and right, as the airport also is just down the way, and a clogged expressway was to my right, yet there I was on eight lanes by myself.

I wrapped around the Kentucky Kingdom amusement park, trudging step by step. I sucked so bad I gave myself a parking lot penalty, and forced my ass to run around the perimeter of the huge main lot out in front of Freedom Hall. I have got to get my groove and stride back so I can move more efficiently, and I’m all about some pain if my body isn’t going to cooperate nicely.

Thankfully my mind stumbled upon a new distraction, finding ways to get my graduate school student loans paid off – which made me forget how slow I was going. 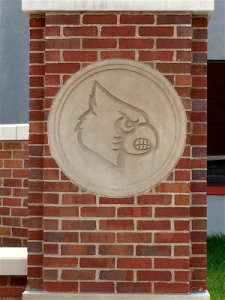 In total I ran 6.8 miles in 1 hour, 13 minutes. I stopped on the way home and bought Epsom salt. Once home I turned all the lights off in the bathroom, lit a candle and soaked in a hot bath for over 30 minutes, with 1 and 1/2 cups of the Epsom salt added. That felt amazing.

I need to get out there again tonight for at least a few miles, but that will have to be in Frankfort after work, if this wreck slowing the commute down will clear. There’s also rain in the forecast for Friday and Saturday.

With only 23 days remaining, rain can’t be an excuse for not hitting my runs, aside from torrential downpours and lightning. I need the pounding and long weekend runs till I get to taper the week of the race.

Every mile counts from now till October 3.

This entry was posted in Events, Exercise, Family and tagged KY History Half Marathon, running. Bookmark the permalink.