Posted on September 4, 2015 by theurbanllama 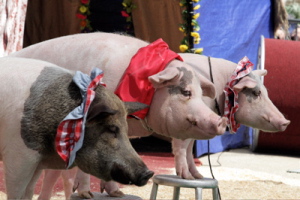 With the fair now over, and all those who worked in its production beginning to recover, there is an obvious silence out my office window. Previously, three times daily, Cuzzin’ Grumpy’s Pork Chop Revue entertained fairgoers with a farmyard song and dance show, featuring giant swine, baby potbellies, and two graceful goats named Fred & Ethel.

As the music came up and the master of ceremonies, Les Kimes, ran out onto his makeshift barn setting, he would greet the assembled crowd enthusiastically and welcome all to the “Pork-Chop-Revue!” This was a show Kimes’ father, Boyd “Uncle Heavy” Kimes, first began putting together in the 1950’s.

After World War II ended, Boyd worked as a merchant marine, but ended up joining a circus in the late 1940s. It was in this setting that he discovered a natural rapport he had with animals. In 1956, after successfully training dogs, Kimes came upon the idea of training pigs to perform.

At the show’s peak of popularity, the Pork Chop Revue was featured on The Tonight Show, Ed Sullivan, Merv Griffin, Mike Douglas, Laugh-in, and many others. In 1966, Les began performing alongside his father, and after his dad passed in 1979, Les took over full-time. He has since continued the show’s run of success with appearances on Good Morning America, Animal Planet and Entertainment Tonight, along with the pigs making several appearances in feature films.

Kimes selects his pigs from three or four farms around the country when they are only a few weeks old. They are raised in his house, milked on a bottle and grow up around the family’s dogs and other animals.

“Often I’ll choose the runt in a litter, and the animal sees that and appreciates it,” said Kimes.

Within three months his pigs are beginning to perform in the Revue. A Milk-Bone dog biscuit goes a long way to convincing a pig to push a baby carriage. Kimes compared the intelligence level of pigs to that of a dog, and goats are often smarter.

“It’s like being the parent of kids about the age of toddlers, 18-months to 2-years,” said Kimes. “The animals need to feel the same level of trust and love a child does.”

These things may start out small, like Betty, who is a mini-potbelly and runs the obstacle course. She is not a year old yet and weighs around 50 pounds. Her counterpart, Marilyn, is a 3-year old full potbelly and weighs in at 100 pounds. Still not so bad. Then there is Rico who tips the scales at over 700 pounds. He cuts quite the figure when wearing his ruffles, sunglasses and is oinking along to “Old McDonald.”

Make no mistake, these critters know when it’s showtime.

“We have an exercise routine before performances,” said Kimes. “I hose them down real good because it gets hot at these outdoor shows, and their skin burns just like ours, so we lather them up with sunscreen, put their ruffles on, and when they hear the music they’ll line up at the door ready to perform – they’re pros and know their stuff.”

Within the last year goats and llamas have begun making appearances in the Pork Chop Revue, to shake up the routine some. Kimes says, “The goats are easy to train and are natural athletes – they come out here and jump on all the stuff anyway.” 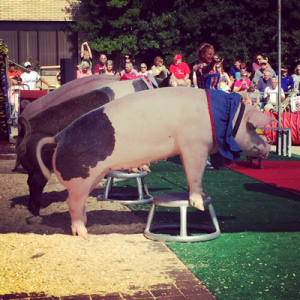 This is the third time the Pork Chop Revue has made an appearance at the Kentucky State Fair, and Kimes reports he is really impressed with the fair’s cleanliness, organization and the friendly nature of all the crowds. Originally from Ohio, but now a Florida resident, Kimes has a special transportation vehicle to get his animals and the set equipment around from place-to-place.

Along with his wife, Nina Meluzzi, who has been performing alongside her husband in the Revue for the last five years, they balance their time on the road between fairs, festivals, theme park appearances and jumping on with touring circuses.

The Pork Chop Revue has played in 49 states thus far, including a trip to Hawaii, with only Alaska missing – but there is still plenty of time yet for Kimes and his bodacious barnyard buddies to get there as well.