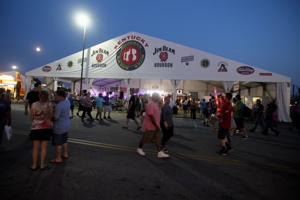 After traveling the Midway and riding the thrill rides for hours on end, many fairgoers are ready to sit for a spell, sample a refreshing cocktail and perhaps get a bite to eat. That all can be accomplished in style by stopping past any of the tents operated by Six Row Events that line the West Lawn.

The centerpiece is the Bourbon, Bites & Brews tent that features cocktails mixed with Jim Beam bourbon, and craft beer offerings from Falls City Beer, Kentucky Ale, West Sixth Brewing and Goodwood Brewing. Live bands are playing daily and giant burgers and chicken sandwiches are being cooked to order at the trailer next door.

A local mixologist composed some especially thirst quenching bourbon-based recipes that are sure to calm any parched tilt-a-whirl rider, such as “The Kentuckian,” made with Jim Beam White, ginger ale and bitters, or try the Devil’s Cut Old Fashioned.

This is the second year Sixth Row Events has been at the Kentucky State Fair, and they are partnering with Budweiser to have two other Bud-inspired lounges.

Inside the bourbon tent has a lodge feel, with plenty of seating and live music.

“It can take 3-years for folks to change their visitation patterns, so we expect to keep growing,” said Lacie Monno, with Six Row Events. “We’re looking to have something to offer to all the different folks attending and engage them with a welcomed attitude and rustic appeal that represents Kentucky.”

After 11 days of serving crowds at this year’s fair, Monno considers a couple tweaks that come to mind for next year; such as a more welcoming overall atmosphere; additional lighting in the bourbon tent; a better seating area, with heavier tables so folks can’t pick them up and move them around; and perhaps getting the burgers and fries out of the adjacent trailer so they are available right inside the Bourbon, Bites & Brews tent.

Six Row Events is also responsible for the hickory smoked barbecue that is being produced by The “Q” at the fairgrounds. Every aspect of this operation is cared for by a “hands-on” approach. The spice rub is an original recipe applied by Chef Alan Hall and his crew. The pork is smoked for 15 hours and coated with a made-from-scratch barbecue sauce. Once it cools the pork is hand-pulled.

Monno says the pulled pork sandwich is by far the biggest selling food item offered in their tents. Though there is no shortage of unique and popular offerings inside the other tents operated by Six Row Events. In particular, the Tacos Locos Cantina, inside the Bud Tent, has done better than expected.

Keeping all of these options humming along has Monno and her staff working 16-hour days during the fair. They’ve been on-site 21 days total, including load-in and working the 11-day fair. Tear down is expected to take an additional two days.

While Monno has only been at the fair for two years, her business partner, Chris Brian, has 41 years of service experience in food & beverage at the fair. He started out as a “corndogger” here, and was known as the “King of Corn.” Not surprisingly Six Row Events operates two corn dog trailers right across the street from the bourbon tent.

“We’re really going to dress this up next year,” said Monno. “This year was our coming out party, and we want to provide an environment that is the best the fair can offer and something Kentuckians are proud of as well.