Posted on March 3, 2015 by theurbanllama

University of Michigan Stadium, or “The Big House,” in Ann Arbor.

After exiting Lafayette Coney Island in downtown Detroit I was fat and happy, but I still had not satisfied my sense of adventure. I needed to hit something else to scratch my itch. A little exploring would help work off my chili dog and I could get my appetite going to squeeze in another stop at some local dive.

Besides, exploration is what the Urban Llama is all about. I can’t say I was excited to be in Detroit on Christmas Eve Eve, but I was there so I might as well see what kind of trouble can be found.

Originally I was considering making a run across the Detroit River to Windsor, Ontario. The drinking age is 19, it has a lively club scene, gambling is legal, prostitution accepted, Cuban cigars are for sale, and absinthe is readily available. What’s not to like?!?

The problem with this idea is twofold. One, Maia and I had our 2-year old daughter Isabella and her little big brother, Jacy, who is 10, along for the ride. Two, in this post-9/11 world there are few open borders remaining. You basically need to be DNA tested to cross into Canada. Since our trip to Detroit was in order to obtain an expedited renewal of Jacy’s passport, sadly Canada was out of the running as an entertainment option.

Sure we could have hung around Detroit longer, but I had my fill of urban blight. I decided instead to extend the road trip and take a drive 45 miles east to the city of Ann Arbor, home of the University of Michigan Wolverines. I wanted to see “The Big House.” 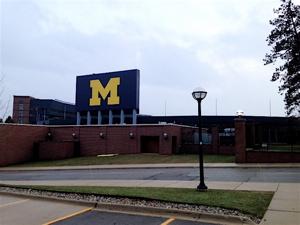 Mainly I wanted to put my eyes on Michigan’s football stadium, known affectionately as the “The Big House.” Built in 1927, it’s the largest stadium in the United States, and the third largest stadium in the world. It’s official seating capacity is 109,901, but on Sept. 7, 2013, Michigan Stadium set the record for the largest crowd to see a college or NFL game, when 115,109 saw the Wolverines defeat Notre Dame.

Through the years I’ve seen numerous televised games from Michigan, but driving up and seeing that enormous maize M against the blue backing raised high above the stadium is quite a sight.

What I immediately found surprising was that considering the seating capacity of this stadium, I expected it to have massive walls towering over the city, but actually its presence is somewhat truncated since nearly three-quarters of the stadium is built below ground level.

The location where the stadium was built had previously been home to an underground spring. During construction this moisture created a quicksand-like surface that caused all sorts of headaches and resulted in a whole crane being swallowed, which remains under the stadium today.

The Big House is quite a calling card for this university community, but the real star is the city of Ann Arbor itself. It’s a gorgeous locale and one I would imagine is hard to leave behind after graduation.

It’s known as “Tree Town,” and serves as home to some 100,000 trees. There are about as many trees as there are residents in Ann Arbor. I bet this place is heaven on Earth come a crisp fall football afternoon. It’s what a college town is supposed to be. It has this English Tudor style of architecture mixed with classical and gothic themes on campus, which reeks of academia. You can smell the brain power.

Now Ann Arbor does like itself some left-wing activism, and they love their marijuana. Residents here have some of the most lenient cannabis laws in the country, and support a large number of medical marijuana dispensaries. If this is up your alley take a trip to Ann Arbor on the first Saturday in April for the annual Hash Bash.

With the education portion of this adventure behind us, it was time for some nourishment before starting the 328 mile journey home to Kentucky. I had time for one last stop in Ann Arbor and that was at Krazy Jim’s Blimpy Burger.

Open since 1953, this is a local institution and routinely touted as one of the top regional fast food joints in America. They ground their own meat and stack their moderate-sized burger patties high at Krazy Jim’s. You have to start with a double burger (singles are only for kids), and they keep going up to the quintuple, which is a robust 1/2 pound, but with stacked patties that sucker gets tall fast.

Krazy Jim’s looks a bit like a demented daycare center, with the color scheme and sign font reminiscent of Krusty the Clown. What helps set the place apart from other burger contenders is the quirky side to their menu and how orders are required to be placed.

They say there are 2,147,483,648 possible Blimpy combinations to choose from (only in Ann Arbor would you find some compound math formula to determine the number of unique menu combos available). With four different burger sizes, six cheeses to choose from, four bun types, nine grilled items and 12 different condiments, best of luck trying to test them all.

There is virtually always a line waiting to order, so the owners dictate a certain ritual be followed by customers when they order their meals to keep things moving efficiently. And no talking on cell phones.

I grabbed a bag of burgers to go. That way somewhere near Dayton, OH I would still have some Blimpy love to sample in the middle of the night. The triple with bacon and sautéed mushrooms was tight. And do get the onion rings. They are bad ass!

We finally made it home from our Detroit adventure a little after midnight on Christmas Eve. Plenty of time to get the kids tucked in and still catch Santa. It ended up being a 30-hour trip, with over a third of that going to travel time, but with many fascinating stops made along the way. I can already feel the sly smile I’ll get the next time I hear a football broadcast coming live from Ann Arbor. Yep, I’ve been there.