Something Stinks in Sen. McConnell’s Campaign 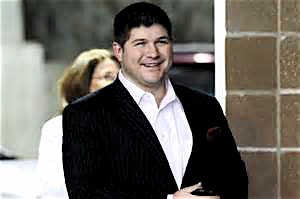 Something always seemed one-off when it was announced last September that Jesse Benton, who ran the successful campaign of Rand Paul for Senate, was being hired by Mitch McConnell as his campaign manager. Especially considering McConnell backed Paul’s opponent, Trey Grayson, in the 2010 Republican primary.

There was bad blood there on both sides, and turns out that distaste remains. Yesterday a recording surfaced of a phone conversation where Benton says, “I’m sort of holding my nose for two years,” referring to the time when he must work on McConnell’s 2014 re-election bid.

The spin on all this is, Benton feels working for McConnell now will help with Rand Paul’s possible presidential run in 2016.

“Between you and me, I’m sort of holding my nose for two years because what we’re doing here is going to be a big benefit for Rand in 2016,” Benton said on the recording. “That’s my long vision.”

The recording was published by the Economic Policy Journal, which said it was made in January 2013 when Dennis Fusaro of the Reformed Theological Seminary called Benton to ask a question about the presidential campaign of U.S. Rep. Ron Paul.

Rand Paul is the son of former Rep. Ron Paul (R-TX), who was the Libertarian Party candidate for president in 2012. Benton is married to Ron Paul’s granddaughter and was spokesman for Paul’s presidential campaign, after having run Rand Paul’s victorious 2010 election bid over Attorney General Jack Conway.

Unlike many political operatives who are just hired guns, Benton is more than casually committed to the Paul family. He also is a libertarian activist, who works closely with conservatives, like Sen. David Vitter (R-LA), and libertarian organizations like Americans for Tax Reform, the Liberty Coalition and the American Conservative Union.

Benton works for candidates and organizations to push his own political agenda.

This story about the taped phone conversation is troubling for two reasons. One, clearly McConnell will do anything, including sucking up his pride to hire Benton, in order to appear more conservative to Tea Party members, who hold a powerful sway in Kentucky. McConnell hoped that by hiring Benton he could scare off any possible challengers in his upcoming primary. OOPS!

McConnell is viewed suspiciously by the Tea Party movement, and now his credibility is further in question. He has spent much of his career bringing taxpayer money back to Kentucky. He supported the bailout package in late 2008 as the economy looked near collapse and has backed an untold number of resolutions raising the debt ceiling.

That doesn’t smell like Tea Party – and they know it.

Secondly, is there a greater manipulation underfoot between Paul, McConnell and Benton? McConnell has always been a mumbler and an opportunist, more interested in the power associated with holding a Senate seat, particularly the title of Senate Majority Leader. McConnell says what he has to say to keep his job, but it’s questionable if he really believes the rhetoric.

This is a message they aspire to take to a national audience soon. 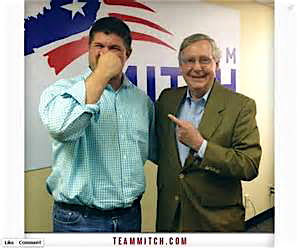 McConnell joking with Benton after the story broke. I guess snake love is better than no love at all…

In an email Tuesday, Benton called the recording “truly sick” and said he is “100 percent committed to McConnell’s re-election. “Being selected to lead his campaign is one of the great honors of my life and I look forward to victory in November 2014.”

“Even Mitch McConnell’s campaign manager, Jesse Benton, thinks something stinks with the Mitch McConnell campaign,” said Bevin campaign spokeswoman Sarah Durand. “His admission that he is ‘holding (his) nose for two years’ while he works for McConnell shows that even McConnell’s top guy realizes that his boss is not a true conservative, and after nearly 30 years of voting for big government and big spending bills does not deserve to be re-elected.”