Championship hardware lines the stage at the Yum! Center Wednesday.

Wednesday was a day to celebrate in Louisville.

The U of L men’s basketball team returned from Atlanta with a national championship in tow, and the Lady Cardinals were national runners-up.

What better way to celebrate both teams’ accomplishments than to throw a big ‘ole house party at the KFC Yum! Center located in downtown Louisville.

Word leaked Tuesday night, before the Lady Cards’ game against UConn in New Orleans, that season ticket holders would get first dibs for this 5:00 PM event. Any remaining tickets were going to get cut loose to the public on Wednesday at 2:00 PM.

The event was free of charge, but required a reserved seat ticket, four tickets per person, which could only be obtained from the box office at the Yum! Center.

This meant waiting in line.

Maia and I talked about it, and thought it would be a cool event to take the boys to – it’s cultural in a strange sort of way, and a chance for us to be in the same room with all these athletes we’ve been watching so closely on television for the last month.

The question was how painful would it be to get tickets.

I wouldn’t have even tried this if it had been for the University of Kentucky, but Louisville fans aren’t so militant. I figured since this was hastily prepared, and in the middle of a workday, there was a chance we could score some seats.

Maia works down the street from Yum!, so I called her around 11:00 to see if she could check the line situation.

Actually, there were only around 50 people there, so she grabbed a spot and started telecommuting with her iPhone.

Meanwhile, as luck would have it, Wednesday, April 10th happened to be our baby Isabella’s birthday, so we thought how fun would it be to blow out your 1st birthday with the Louisville Cardinals at the Yum Center?!?

I pulled her brothers out of school at 1:00 and we hit the road for the hour drive west from Frankfort.

By this time, the box office line had grown considerably, stretching around city blocks. At 2:00 p.m., the tickets were cut loose and Maia scored seats in the 200 section.

We picked her up from work and headed down to W. Broadway. We had found some great game t-shirts out this way, designed locally and printed for a fraction of the cost to those in retail outlets.

On this day everybody had a smile, and all the t-shirt vendors were doing a brisk business. One had a spot under the eaves of Liquor Zone, another was run out of a back of a van, and multiple tables were strung together outside a check cashing joint.

Folks wearing red could be seen running back and forth across Broadway, clutching newly bought red championship shirts in both hands.

Heading back towards downtown I noticed some guys had cranked up several large black smokers at the One Stop Auto Repair & AUTO SALES joint. Cars were being serviced in the front and barbecue was being smoked out back.

I drove past once, but when I smelled that sweet hickory aroma, I stopped the car and turned around. This was definitely the spot for lunch today.

The ribs weren’t going to be done for another hour or so, but the hot sausages were up. That would do for $3. It was nearly as plump as my forearm, and came served on a hotdog roll with BBQ sauce. It was juicy, spicy and full of smoky goodness.

About the time I reached the last bite we were pulling into the arena garage.

This was my first time visiting the Yum! Center since it opened in 2010. It’s a gorgeous facility, getting plenty of natural light through its glass panelling,  and smoothly disperses lobby crowds by using multi-level escalators.

The interior designers did a fantastic job of showcasing the history of Louisville athletics, and other significant city figures, using red-accented banners that billow through the concourses to occupy the eyes of those heading to their seats.

Inside the arena it was a sea of red. The pep band was playing and the lights were flashing.

Feeling juiced as we headed to our seats.

It took on a club-like atmosphere, as Louisville’s public address announcer introduced the Lady Cardinals. Shoni Schimmel, who came out last, garnered the loudest admiration.

Then cheers of “LUUUUKE” and “SIVA” began to rise, as the men’s team stepped up.

For the Louisville faithful this was a chance to say thanks, and to revel in having a championship of their own, as many were not alive 27-years ago when the Cardinals last won a title.

Standing on stage before the two teams and all their newly won trophies, university president James Ramsey rhetorically asked the assembled crowd, “Is it a pretty good time to be a University of Louisville Cardinal?”

It certainly is, particularly when you consider the Louisville football team also upset Florida to win the Sugar Bowl in January.

The architect of this success was athletic director Tom Jurich, who thanked all the fans for their support, especially during the men’s first round games in Lexington at Rupp Arena, home of the Kentucky Wildcats, when they turned the place “completely red.”

The crowd of over 20,000 was treated to inspiring words from Schimmel, Final Four MVP Luke Hancock, senior guard Peyton Siva, and national inspiration Kevin Ware, who had his leg broken in the regional finals against Duke.

The emcee was trying to move forward with the program, but the crowd started chanting, “We Want Russ, We Want Russ.”

Smith thanked the fans who didn’t give up on the team after they lost in last year’s Final Four, and for sticking by them during the three-game losing streak this season and the five-overtime loss at Notre Dame.

Now if he would just stay for one more year – but not likely.

Then the crowd summoned junior center Gorgui Dieng, with cheers of Gor-Gui, Gor-Gui!

Dieng also most likely will be heading to the NBA, and said  in parting, “I love the school, the city and especially the fans.” 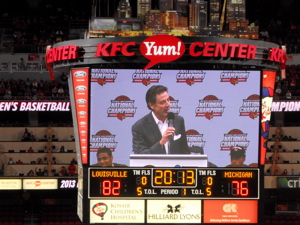 The crowd was in a frenzy by the time Coach Pitino took the microphone. Whether he had slept any since Monday or not, Pitino looked amazing. He had on a crisp white shirt, open collar, a dark tailored suit and white handkerchief – it was classic Pitino.

Of course after the announcement Monday of his future enshrinement, he could now be introduced as “Hall of Fame” coach Rick Pitino, which brought the house down.

Pitino’s voice was gone, but he took a deferential and humble tone regardless.

He thanked the women’s team for their accomplishments, and highlighted the significance of their upset of top ranked Baylor, citing it as above Houston snapping UCLA’s 47-game winning streak in 1968.

His tone was that of a man who has come a long way since being signed as a brash coach at the University of Kentucky in 1989.

He won a title for the Wildcats, but lost one too, and made that horrible coaching blunder in the 1992 regional final, allowing Christian Laettner to hit that infamous last second winning shot.

He opted to return to the NBA and had a disastrous run with the Boston Celtics; lost one brother-in-law to 9/11, and another was struck and killed by a New York taxi cab; there was the embarrassment of a sex scandal with Karen Cunagin Sypher, and her attempted extortion, forcing a FBI investigation and subsequent trial.

It has been a long road since 1989. Pitino has survived all that turmoil while living a public life, but you could hear the wear and tear in his voice.

What really cranked the heat up under Pitino was Kentucky hiring John Calipari. Whether you like Calipari’s one-and-done philosophy or not, he went Final 8, Final Four, national title in his first three years.

Fun in the fountains outside Yum.

Pitino and Louisville needed this title, and the win was all the sweeter as it came during a season in which Kentucky failed to even qualify for the tournament.

The 90 minute presentation closed with an encore showing of “One Shining Moment.” Only this time there were 20,000 Louisville fans there to cheer along.

I’m not sure what the boys made of this whole event. They’re still figuring out sports and the nature of the bizarre college basketball rivalry within Kentucky. 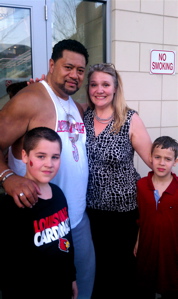 Peyton Siva’s dad, who is a local celebrity of sorts posed for a photo with Gabriel, Jacy and Maia.

They had fun, but are of the video age, and even though the players were in the gym, they watched most of the event on the jumbo screen – it was like virtually live for them.

Although you could tell they were really loving the aspect that they could scream their heads off and no one told them to quiet down.

Isabella was most taken with all the festivities being provided for her birthday, and thanked everybody for coming.

What I found amusing was that out of all the cool stuff we did Wednesday, the biggest fun was had after the official festivities concluded, when all the kids poured outside of the Yum! Center and jumped into the fountains.

As usual it’s the simple things in life that are most satisfying – like winning a national championship.