It has been 27-years since those words have rung out on a national championship stage for Louisville’s basketball program.

While the Cardinals have maintained a level of excellence, when your rival down the road is the University of Kentucky, conference championships and Final Four appearances are not enough.

Kentucky hung three banners since Louisville’s last win in 1986. Rick Pitino and the Red/Blue rivalry needed this win and it was delivered.

The Louisville Cardinals are the 2013 National Champions of college basketball.

One year ago the unthinkable happened and Louisville met Kentucky in the Final Four. These bitter rivals, separated by only 75 miles, face each other once a year already, but the game takes on a darker tone when advancement in the NCAA tournament is on the line.

The Wildcats were supposed to be there, with six future NBA players on their roster, but Louisville was a surprise entrant. Though spirited, Kentucky was not to be denied, and the Wildcats dispatched the Cardinals 69-61, then thumped Kansas to win an eighth championship.

That loss did not go down well with Louisville’s players, and it set the tone for this season, with one goal in mind – to win a national championship.

Monday night Louisville realized its ambition, coming from behind to beat Michigan 82-76.

“We came up short last year, but that drove us this season, said Wayne Blackshear. “All the hard work we went through this summer, the losing streak this season, it’s all worth it because of this moment. This feeling right here, winning a national championship, it’s indescribable.”

As I’ve argued with the UK faithful this entire season, the Cardinals are not the most talented team – Michigan will probably send more players to the NBA, but Louisville is a great college team, and that is what won out Monday night.

The Wolverines played well enough to win, shooting 52 percent from the field, but the Cards were relentless, and outworked them.

Michigan got up 12 in the first half when 5-foot-11 freshman reserve Spike Albrecht erupted for 17.

It appeared the Wolverines, prematurely, thought this was going to be a rout. 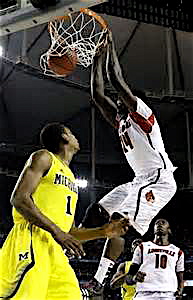 But Louisville refused to go away, and got scoring from all its starters to stay within 10. Then Luke Hancock answered Michigan by draining four 3-pointers before the half ended, sending the Wolverines to the locker room only up one.

That was the beginning of the end. Michigan should have been up more.

Louisville controlled the game from there.

The loose balls were going to the Cardinals, Siva started scoring in transition and Behanan was a beast on the backboards.

Aside from Trey Burke, who worked his butt off scoring 24 points, the rest of his teammates seemed to rely more on believing their own hype than actually getting down in the trenches and doing the dirty work that was required to win this game.

Michigan’s program has always had an unfounded level of arrogance. In the stands Monday night were the fabled “Fab Five,” of Chris Webber, Jalen Rose, Juwan Howard, Jimmy King and Ray Jackson, who arguably are the greatest freshman recruits ever.

They also choked like dogs in two national title games, and never reached their collegiate potential. (*) 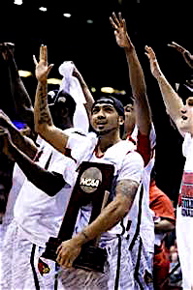 Senior guard Peyton Siva taking in the scene after winning a championship.

Rick Pitino refused to let that happen to his Louisville team.

Star shooting guard Russ Smith had an off night. That wasn’t entirely his fault. Smith is generously listed at 6-foot-1, and had the 6-foot-6 Tim Hardaway Jr. on him all night. That is a lot of size to be giving up.

Smith kept Hardaway to 12 points on 5-13 shooting, but himself shot a dismal 3-16, totaling nine points.

This is the kind of adversity Louisville has had to overcome all season.

After losing a five-overtime game to Notre Dame in mid-February, Pitino gathered his team and refocused them on what he believed their potential could be.

“When we lost to Notre Dame I gave them very demanding goals,” Pitino said. “I said, ‘It’s not probable what I’m about to say to you, but I think it’s possible. I think we can win the next seven games, go into the most special arena in America and win the tournament in Madison Square Garden, then go on to be a No. 1 seed and win the national championship.'”

That is exactly what Louisville did, completing the season on a 16-game winning streak.

That run included an improbable come back from 15 down against Syracuse in the Big East championship game, before going on a 40-10 run and winning by 17.

In the Midwest Regional final, teammates looked on in horror as guard Kevin Ware snapped his leg in two places, but the team rallied to defeat Duke by 22.

Then the Cards used their second team to erase a 12-point deficit to Wichita State in the national semi-final, before coming from behind one last time against Michigan Monday night, and claiming the school’s third national title.

The win elevates the University of Louisville and Coach Pitino into rarefied air.

Rick Pitino cutting down the nets in Atlanta.

Pitino already had gained inclusion in the Naismith Memorial Basketball Hall of Fame earlier Monday. He won a title with Kentucky and was the first coach to take three different schools to the Final Four. Now he is the first and only coach to win a championship with two different universities, which both happen to be in the state of Kentucky.

For Louisville, the university jumps into a tie for the fifth most championships, with Connecticut and Kansas, trailing only Duke (4), Indiana/North Carolina (5), Kentucky (8), and UCLA (11).

This elevates them above the likes of Cincinnati, Florida, Michigan State, and North Carolina State, and cements the Cardinals as one of the truly historic programs in all of college basketball.

In the end, this was a magical run, paved in hard work and self-reliance. The Cardinals did what they set out to do, and made good on their fallen brother’s wishes – Louisville won a championship for Kevin Ware.

* Both Final Four appearances involving the Fab Five were vacated, along with all wins for the entire 1992-1993 season, due to the acceptance by Chris Webber (and others) of an estimated $616,000 in cash and gifts from booster Ed Martin. Webber is serving out a 10-year no contact ban with the University of Michigan, which began in 2003. While he was able to legally attend the championship game, Webber was forced to sit up in a suite away from his former teammates.