Cinderella is alive and well in the 2013 edition of the NCAA tournament.

Florida Gulf Coast University is the first ever 15 seed to advance to the Sweet 16. With their high-flying dunks, dreadlocks and chicken dance – the Eagles have become an instant national sensation.

Anyone who picked Florida Gulf Coast U into the round of 16 please standup and take a bow.

This team’s success is what makes the appeal of this tournament so sublime. FGCU, located in Fort Myers, Fla., plays in the Atlantic Sun Conference. This includes the likes of Mercer, Stetson, Kennesaw State University and Lipscomb.

No disrespect, but it’s hard to find much of a deeper backwoods in college basketball than the Atlantic Sun.

When looking at FGCU’s profile it’s not the kind of pedigree that makes one think they have a great chance to beat a team like the No. 2 seeded Georgetown Hoyas. They show losses to Maine, Mercer, E. Tennessee State, Stetson, and Lipscomb (twice).

But it’s also in this teams losses where the roots of their current success can be traced. 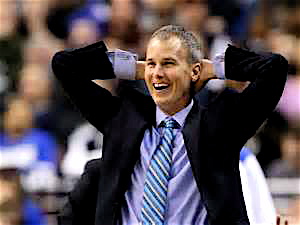 Enfield used to be a Wall Street tycoon who shared in the startup of both a successful software company and a basketball consulting business.

His basketball chops come from his previous career, where Enfield was a career 2,000-point scorer at Johns Hopkins, was mentored by former Kentucky and current Louisville head coach Rick Pitino, and was an assistant coach in the NBA where he specialized in player development and shooting for six years.

It was in 2006 that Enfield traded in his address at Trump Place in Manhattan for a spot in Tallahassee as a member of Florida State’s coaching staff.

The coach’s wife, Amanda Marcum with her son at the Georgetown game.

This guy wins at whatever he does. By now you’ve probably seen his supermodel wife Amanda Marcum. Need I say more…

FGCU has only been around for like 20 years, compared to Georgetown University that was founded in 1789, but Enfield convinced the AD that he could win even before the university was eligible to play in the NCAA.

This program has gone from having its offices in trailers by the swamp and practicing at local high school gyms to building its own arena and playing before sellout crowds.

So when Enfield came to his players and asked if they wanted to play some out-of-conference big boys they trusted him and said yes.

This season FGCU opened at VCU, where they lost by 23; went to Duke and lost by 21; lost at St. John’s by 11; and lost at Iowa State by 11 – but gained valuable experience facing teams from power conferences in hostile situations.

Oh yeah, and FGCU also scored a home game with the No. 2 seeded Miami Hurricanes in November and beat them, 63-51.

The Eagles knew early on this season they could play with anybody.

When the brackets came out two Sundays ago and Enfield saw FGCU was scheduled to play No. 2 Georgetown in the first round, he predicted his team into the Sweet 16 or Final 8 – declaring the Eagles would be making a run.

And he was on the money.

Now Cinderella has a date Friday at 10:07 p.m. with its evil in-state rival, the University of Florida Gators. This time the stage gets even bigger for Florida Gulf Coast, as the regionals will be held in Arlington, TX, at the ginormous Cowboys Stadium, of Dallas football fame.

You think Billy Donovan, who is another Rick Pitino protégé, isn’t a little nervous about facing Florida Gulf Coast.

The Eagles have been playing with house money since the first game of the tournament and have nothing to lose.

That kind of freedom makes those jump shots all the easier to hit.

It’s a tough game no doubt, but pick against Enfield’s Eagles with care – they may have a game or two of magic left in that Cinderella slipper.

This entry was posted in Events, News and tagged Florida Gulf Coast University. Bookmark the permalink.