Crawfish Fettuccine for the Louisville Game

Isabella in the kitchen helping me prep vegetables.

Game time Saturday night and I was getting an unexpected surprise. The whole house was clearing out as Louisville was about to play Colorado State for a spot in the Sweet 16.

It has been a long week, as the boys began the first week of their three-week spring break. I could use a moment of uninterrupted peace. I don’t need silence, basketball games are like white noise to me. I can put those on and mute out the announcers.

Our entire house picked brackets. This is the second year we’ve done this, so Maia’s boys, who are 8 and 10-years old, appreciate the Kentucky versus Louisville and entire college basketball phenomenon much more this time around.

Even the baby filled out a bracket. Isabella has Duke/Indiana in the final (not a bad guess for an 11-month old).

With the boys headed to an overnight lock-in at the YMCA, and Maia taking the baby with her to Louisville to watch one of our cousins perform in a play, I called my friend Matt to see if he could escape and come over to watch the game.

I had an empty house – which is a valuable commodity.

It’s funny, I moved back here two years ago – you wouldn’t think it would be that hard to get together with friends, but it takes a ridiculous amount of planning and some luck when you factor in kids, dinner and homework.

At 6 percent alcohol these new Bud’s will move your buzz along.

This time it worked out swimmingly. We picked up some of the new high-octane Budweiser Black Crown lagers for the Louisville game, which was a romp.

The benefit of being a number one seed is you don’t have to face as tough an opponent, often, in the first two rounds. Louisville cruised through to the Sweet 16, and while Oregon may be a better team than they are seeded, you can’t argue with drawing a 12-seed for a chance to advance to the Elite 8.

Games would be played until after midnight, so we needed some eats. I had exhausted my pizza intake earlier in the week, and nothing else fast was sounding good. I was in the mood for some pasta anyway. Matt and I both dig spicy food, and since there wouldn’t be any childrens about requiring dulled down cuisine, I went with a New Orleans Cajun specialty I’ve worked on perfecting over the years.

If you have a taste for New Orleans food, this is a great recipe, because it isn’t one that requires making a roux or chopping up vegetables for half a day – I can knock this out in under an hour.

Rinse the crawfish tails thoroughly in a colander (they’ve traveled a long way and been frozen, make sure they are well-cleaned). 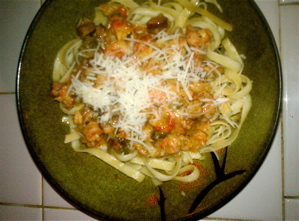 Chop the onion, bell pepper and celery; melt butter in medium to large skillet and sauté 5 to 10 mins; add garlic, cayenne, black pepper and white pepper and sauté 5 mins; slice and chop andouille sausage, add to pan, and cook for 5 mins; add crawfish, parsley, jalapeño and Parmesan cheeses; simmer on low for 15 minutes then pour in white wine; simmer for an additional 15 minutes.

Boil fettuccine for 12 to 14 minutes until soft and drain; place a bed of fettuccine in a bowl; spoon 1 cup of crawfish mixture over the pasta; hit it with a few shakes of Frank’s and top with Parmesan.

It makes 4 to 6 servings. I recommend garlic bread to go with this.

There is nothing like good food and old friends – the basketball was a bonus.

This entry was posted in Family, Food and tagged Crawfish Fettuccine. Bookmark the permalink.