Posted on February 22, 2013 by theurbanllama

This Helvetic Air flight was canceled after being robbed of its diamond cargo in Brussels, Belgium.

On Monday $50 million in precious stones was pilfered from the hold of a Zurich-bound plane without a shot ever being fired.

This was a once in a generation kind of rip.

“What we are talking about is obviously a gigantic sum,” said Caroline De Wolf, of the Antwerp World Diamond Centre.

This vaguely resembles the plot from the 2000 Guy Ritchie film, “Snatch,” starring Brad Pitt, Benicio Del Toro and Jason Statham. As the film begins, Statham’s character, Turkish, famously questions, “What do I know about diamonds. I’m a boxing promoter.”

I get armed robbery is nothing to glorify, and that it’s dangerous business; if any airport personnel had tried a hero-move chances are that someone would be dead. Those eight masked gunmen did not drive out onto that airport tarmac not prepared to shoot if necessary to get away with those stones quickly.

Still, we’re not talking about holding up a Quickie Mart or the corner liquor store.

Usually this kind of brazen orchestration is something we see surrounding the theft of priceless works of art, such as paintings.

But make no mistake this snatch-and-grab was a work of art.

They had to somehow get the information that this shipment was being made first, probably from the inside, and then put a plan together and a talented team.

A fence is locked and patrolled near where robbers entered the Brussels’ airport. Trip wires are now being discussed as a way to monitor the extensive fencing surrounding airports.

An airport spokesman said they made a hole in the perimeter security fence at Brussels’ international airport, and drove a black Mercedes car and van up to the Swiss passenger plane approximately 20 minutes before its scheduled 8:05 departure.

An armored van had arrived moments before delivering 120 parcels of diamonds from the Belgium port city of Antwerp, the world’s capital of rough and polished gems, which is located 27 miles from the airport.

The robbers flashed their automatic weapons to the airline and transport security workers on the tarmac, freezing everyone and leaving them dumbfounded, then grabbed the cache of stones from the hold and roared off into the darkness.

Imagine the control these guys exhibited over their behavior and adrenaline, knowing there were eyes and cameras on them everywhere. There could be no screaming or yelling, nor frantic waiving of weapons.

These guys were calm and efficient under immense pressure.

Their clothing and vehicles looked close enough to the real thing to allow them onto the tarmac without drawing undue attention. I must assume it is not irregular to see law enforcement on international runways, otherwise security at the Brussels’ airport must have fallen asleep at the wheel.

Regardless, their disguises allowed the robbers the necessary time required to pull off the heist.

It took five minutes from start to finish.

Like Keyser Soze in the 1995 Brian Singer film, “The Usual Suspects.”

“The greatest trick the Devil ever pulled was convincing the world he didn’t exist. And like that, poof. He’s gone,” said Kevin Spacey as Verbal Kint.

Five minutes goes by fast unless you are the one standing there exposed.

If anyone questioned why those fake police vehicles were out on the tarmac, over by the one plane that happened to be carrying $50 million in diamonds, there would be no escaping.

These robbers were hiding in plain sight, which is very effective but extremely dangerous.  If their cover got blown they were either caught or dead.

I learned insurance on this kind of transport comes cheap because air delivery is considered so safe.

The Mercedes van used in the heist found on fire.

It had been just long enough since the last big diamond heist, in 2003, when about $100 million in precious articles were removed from high-security vaults at Antwerp’s Diamond Center, that a level of complacency had returned to the transportation of diamonds via air flight.

Police found one burned out vehicle close to the airport later Monday night. The location of the other remains unknown.

This robbery has a similar feel to the Lufthansa heist on December 11, 1978, when an airport worker at JFK in New York clued associates of the Lucchese crime family that millions of dollars in untraceable American currency was being flown in once a month from monetary exchanges for military servicemen and tourists in West Germany. 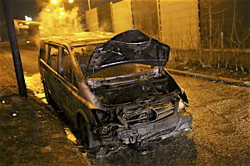 Remains of the burned out Mercedes van.

An estimated $5 million in cash and $875,000 in jewels was stolen in what was the largest cash robbery in American history at the time.

This was a huge story, but returned to modern consciousness as the centerpiece of the plot to Martin Scorsese’s 1990 Oscar-winning gangster film “Goodfellas.”

You have to hand it to whoever pulled off this Swiss Air robbery, it was pretty bad ass!

Now these guys have to move $50 million in stolen ice – and keep a very big secret.

That gets heavy, and human nature makes us want to take credit for a job well done.

I mean how many people out there are capable of executing this level of operation?

The list has to be small, and I’m sure drastic inquiries will be made of all possible suspects.

Law enforcement is going to be crawling through the backgrounds of every worker in that airport terminal, looking for irregularities.

If you are one of the eight guys who pulled this job off, suddenly the world is not such a big place, but damn, how intense must it be to score a heist like that without firing a shot.

The planning and precision were impeccable.

Best of luck boys – keep your heads low and the wind at your backs!

This entry was posted in News. Bookmark the permalink.