Posted on December 4, 2012 by theurbanllama

The Holy Land of Big Blue Nation that is Rupp Arena.

My brother Geoff and I attended the Kentucky basketball game this past Saturday in Lexington. Yep The Cats lost to Baylor 64-55, marking the first loss at Rupp Arena under Kentucky Coach John Calipari.

It had to happen sooner or later, but this wasn’t supposed to be the time or the team. Vegas favored the Kitty Cats by -7 points. After losing by nine, that is a 16 point swing, a massacre by betting line standards.

It snapped the nation’s longest home win streak at 55 games, with UK’s last home loss coming on March 4, 2009 to Georgia, and forces the question of whether this year’s Cats can mature on the fly in time to situate themselves to compete for a national title in three months.

Kentucky played Baylor tight, but UK is one of the youngest teams in college basketball, and has yet to develop a personality. They battled, but had no players capable of stepping up to hit a meaningful shot, and compounded their inexperience by missing half their free throws.

That will get you beat, but the loss should prove helpful going forward.

Saturday, Wildcat players were making initial moves that would have allowed them to score in high school, but Baylor smacked them in the mouth and Kentucky couldn’t finish.

It’s hard starting a season in the shadow of UK’s 2012 NCAA Championship team. After runs to the Final Eight, Final Four, then winning it all last year, there is an inclination to believe Calipari can plug anybody into his system and it will produce instant success.

The current crop of players believed just that, but now with UK having dropped out of the Top 25 for the first time in 61 weeks they know better.

Kentucky sent six players to the NBA from its championship team, including Anthony Davis, the number one overall pick, and Michael Kidd-Gilchrist, the number two selection.

UK doesn’t have anybody with this kind of killer instinct on its roster right now.

This is a talented group, long and athletic, but they need to learn quick that name across their jerseys will not guarantee many wins.

One of the big issues is point guard.

NC State transfer Ryan Harrow, a sophomore, has had off-court issues and hasn’t been capable of running the team. Freshman Archie Goodwin has tried filling in, but he is a natural two guard, and UK’s best scorer. His forte isn’t setting up other players and dishing the ball.

Jarrod Polson, a 6-2 junior, has played some decent minutes at point, but is on a short leash. He’s gritty, but the jury is out on whether he has the raw talent to get his own shot.

Down low, neither freshmen Nerlens Noel or Willie Cauley-Stein can score. They are decent rebounders and can block some shots, but neither can score the ball — yet.

Kyle Wiltjer, a 6-10 sophomore, is the only returning player of consequence. The guy has a quick shot and is developing moves closer to the basket, but he is meant to be a role player. If teams focus on him as a featured scorer Wiltjer can be nullified.

The question is whose team is this?

The Duke loss was understandable, but losing to Notre Dame was different. The Fighting Irish won 64-50 and it wasn’t that close.

Kentucky needs a floor general. This is the first team under Calipari where there hasn’t been a proven leader.

This unresolved hoopla only made for a better story line upon entering Rupp Arena. It’s always cool to catch a game at Rupp. Going into the heart of Big Blue Nation is something to behold. It’s a cultural phenomenon. 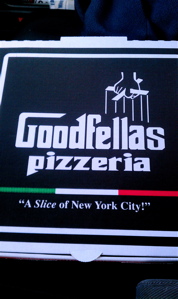 This NY-style thin crust pizza at its best.

Lately I have been pulling major time with my baby girl and the two boys, so getting out to catch a game was a welcomed treat.

We met up at The Grey Goose in Lexington, which offers affordable pub fare and quality strength libations. This area also is walkable to Rupp and has considerable on-street parking available.

While Baylor may have avenged their loss to Kentucky in last year’s Elite Eight matchup, more importantly I got  some time to chill with my bro, enjoyed the me-time, and as a consolation prize, grabbed some slices from Goodfella’s for the ride home.

I was going to hang in Lex to watch the SEC football championship game between Georgia and Alabama, but nothing kills a party in Lexington like Kentucky losing at home. That crushed all the buzz around the downtown area.

“It’s like a slice of New York City!” A big slice.

Overall, my takeaway from Saturday was that UK has a bunch of 18 and 19-year old kids that are playing before 23,500 people at Rupp Arena, the biggest basketball arena in the country, and they have a huge target on their backs.

These kids are going to make mistakes, but this team has a ton of potential. They’re record is 4-3. Next they get four games against less than challenging opponents, whereby they should make some adjustments, figure out who they are, and work out the kinks.

The results will be on display come December 29, when UK visits cross-state rival Louisville, where ex-Cat’s Coach Rich Pitino has a Final Four team from last year that is currently ranked fifth.

Most any other school would be content to have Kentucky’s start to the season, but Big Blue Nation has a level of expectation that is unlike any other university’s program.

This will be an exciting year. If you like soap operas tune in to Kentucky basketball. The heroes and villains have yet to be identified. There most likely will be a power struggle to find a leader, and the chances of close games being decided by turnovers or last second shots is highly probable.

Snap on your shoulder harness, welcome to another season of Big Blue Madness.

This entry was posted in Events, Food. Bookmark the permalink.