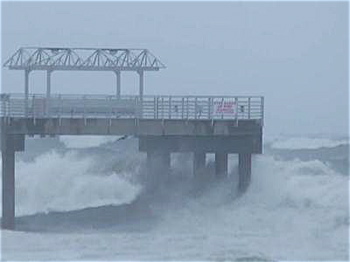 This is not a happy day in New Orleans.

Still hundreds of thousands of residents are without power, widespread structural damage is being reported, and Plaquemines Parish is seeing 10 to 12 feet of flooding from storm surge.

This is all too familiar for me – coffins floating out of graves again and such.

Six years and 364 days ago I was evacuating New Orleans with all I could fit into a rental car, including my wife and cat.

I secured one of the last vehicles available from the Hertz location at Armstrong International Airport before police stepped in to cut the line in the middle of the night.

That was the difference between getting out before Katrina arrived and being stuck to ride out the storm somewhere in New Orleans.

Others banded together to negotiate pricey cab rides to Atlanta, Memphis and Houston.

It took Hertz all night to process everyone’s paperwork. I drove off the lot around 4:30 a.m. and headed back to our condo. We loaded everything we could and hit the road.

The cab driver who took me out to the airport the night before had recommended we go west before attempting to go east, as gridlock had begun to take hold. This worked like a charm as we avoided the bridges and went north into Mississippi before cutting back east.

It was like a NASCAR race coming out of New Orleans, as the contraflow evacuation plan had every lane leading away from town like a jailbreak.

We got out some 20-hours before Katrina made landfall the next morning.

Initially it looked like New Orleans had caught a break by Katrina coming ashore to the east of town. I stayed up till 2:00 a.m. watching coverage and went to bed thinking we had dodged a bullet.

Then the levees popped.

I knew something was wrong. I could hear my parents in the hallway discussing how they were going to tell us.

That was ugly, but we returned to the Big Easy. She wasn’t so “easy” for a while, but it steadily improved.

Seven years later the money and rebuilding assistance has continued to flow and the city has never looked better. There was BP’s oil spill two years ago, but tourism has returned, and there are more restaurants now, over 1,300, than pre-Katrina.

There also was the Final Four this year and the Super Bowl returns in 2013.

The Crescent City was on a hot-streak when Isaac came calling.

Considerable work has been done to fortify this area, but parish president Billy Nungesser reported they needed a few more years without a storm like Isaac before the work could be completed.

I’ve since re-located to Kentucky, and like everyone else, I’m watching this storm on CNN. It creates an odd sensation in me because I can feel the pain and anxiety of residents down there.

While it has been seven years since Katrina, no one in New Orleans has actually dealt with the catastrophe. People got on with life, repaired their homes and went back to work because they had to, but why this man-made disaster occurred and why George W. Bush and our government criminally mishandled the aftermath has never been adequately explained.

Hurricane Isaac isn’t going to cause the loss of life or property damage associated with Katrina, but hearing the winds and seeing the water rise is enough to trigger the Post Traumatic Stress most residents of New Orleans have in the backs of their minds.

I worry for my ex-wife who still lives in New Orleans, and for all the residents there.

Seven years and the hits just keep on coming.