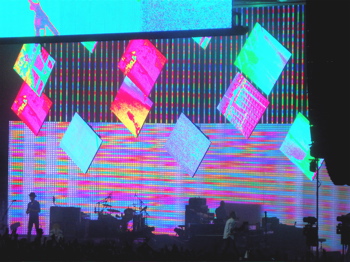 Radiohead performing at Riverbend in Cincinnati.

I love putting a good mix together, then hopping in the car for a little road trip.

I thought I had this new one finished three times now, but it kept falling apart towards the end.

Originally I burned these songs for the Radiohead concert in Cincinnati on June 5th.

I made two CDs for the ride up.

One was a Radiohead mix – just a little something to help replicate the show I was about to see.

These guys never play a typical concert and The King of Limbs tour was even more avant-garde.

So I reviewed all of Radiohead’s setlists from this tour; they prepped 75 songs, and play around 23 of those a night; about 15 are played every night in some random order, leaving eight at-large selections.

I thought these 17 songs seemed like a fair representation of what might get played, and they were in the ball park:

Throwing Creep on at the end was a gratuitous selection on my part. I realize Radiohead doesn’t play it much anymore, but it was a sweet way to finish the set.

Now about the new mix.

I wanted this also to have a diffused atmosphere, so I chose tracks with a house or trance feel, some techno and a few “UP IN UR GRILL” hard rocking alt tracks – real high energy stuff to get the blood and alcohol pumping for the show.

It almost turned out great. The problem was I tried plugging in this Lil’ Wayne track, but it clashed with the tunes around it.

Then I had this song from The Call, but that stark 80’s synthpop wasn’t working.

Thought that was the end of it, but after listening to the mix again the Radiohead song wasn’t flowing. I intended to use Little By Little, but really anything off The King of Limbs is hard to use in a mix format because it is so unstructured.

I fixed that quick enough by plugging in Go To Sleep (Little Man Being Erased), from Hail To The Thief.

This put the finishing touches on my new mix.

It’s entitled, Don’t Be Crazy Underneath, which is an inside joke, and applies to anyone you’ve ever dated that appears fine and normal on the surface, but when you get them home, they turn out to be stone crazy.

A few highlights are The Features; I had to put the Beastie Boys on here in honor of Adam Yauch (MCA),who died last month; Love this Diplo take on Hey by the Pixies; just recently discovered Thee Oh Sees, a San Francisco surf/punk garage outfit (go to the 2:00 minute mark on this video and check out I Was Denied), Monster!; and the incomparable Skrillex, whose vicious dubstep will snap your head off.