The Black Keys Bring the Sizzle to Cincinnati 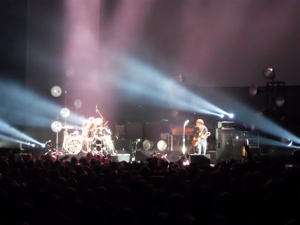 Friends it’s hard to express what a fantastic show the Black Keys put on March 2 at U.S. Bank Arena in Cincinnati. They brought some serious swagger to a 17,000 seat arena and played it like an intimate club show – which is no easy task.

This was a big step up for Dan Auerbach and Patrick Carney, the garage revival duo from Akron, Ohio. On the scene since 2002, the band has steadily risen in popularity with each of its eight releases, becoming a constant presence on the festival circuit since 2006.

Momentum for the Black Keys really picked up when Danger Mouse came on board to produce their 2008 CD, Attack and Release, along with the initial hit, Tighten Up, off the band’s triple Grammy winning 2010 smash Brothers.

Even with all that buzz, the Black Keys continued to play mostly theaters and ballrooms into 2011. We’re talking 1,000 people and under. Sure Coachella, Bonnaroo and Lollapalooza gave them huge crowds, but those folks came to see a variety of bands, and the Black Keys weren’t necessarily the primary headliner.

It’s a whole different animal trying to fill up an indoor arena and play to a room that size, especially for two people.

I’d seen the Black Keys ignite crowds in a festival setting, and was dying to catch a solo show, especially after hearing their most excellent new release, El Camino.

When I saw they were touring arenas I was slightly skeptical. I knew the potential was there for this to be a GREAT show, especially with a roof over these boys to keep the sound in, but it sure would have been sweet to catch them in a small sweaty club.

What can you do but go to the show…

Thankfully that Friday the legislature cooperated and adjourned early, which got me out of work at 3:00. I got up to Lexington and rendezvoused with Whitney and Eric for our 80 mile drive north to Cincinnati.

The weather was not being kind. CNN reported the “Tor:Con Index” was an ugly 9 out of 10 for central and northern Kentucky, and “tornadic” conditions were expected.

I wasn’t even sure if that was a word. This called for a stop at the liquor store, as we would be driving into the worst of it.

Whitney took the wheel and away we went. It did get a little sketch for a while, but we lucked up and drove through the tail end of one system and got north before the next one swept past.

After some drinks at the Holy Grail and the In-Between Tavern it was go time, and we headed to U.S. Bank Arena.

Whitney rocks her palsy demeanor and Eric is starting to feel comfortable.

Eric had killer seats at about 4-o-clock from the stage, and a few rows up off the floor.

The British indie rock band the Arctic Monkeys opened the show. These guys are good and had the women swooning with their thick accents. By the middle of their set the crowd had doubled in size.

This was the first stop on the American leg of the tour for them and they seemed to be going through the motions, to see how each song was received. If their performance had been in a small club it would have been amazing, but the room was a tad big for these blokes yet.

[Listen to the Arctic Monkeys]

We also had a Patrick Carney sighting. Whitney noticed he came out of the tunnel in our section to lean against the wall and watch the Arctic Monkeys’ set.

By the time the lights went down for the Black Keys the place was packed. Seating behind the stage was curtained off, so I’m guessing the crowd was 12,000. There was good energy in the air, and Eric and I were down with that.

Auerbach greeted the Ohio-crowd, then launched into Howlin’ For You, followed by Next Girl, both off Brothers – making a strong opening statement.

They’ve added a bass player and keyboardist on this tour in order to play the songs from Brothers and El Camino.

It's like a blizzard in this joint for Everlasting Light.

The video and lighting created a very professionally done lo-fi atmosphere. There was a 15′ high projection screen wrapped around the back of the stage that showed video, plus offset modular lights in between the band members. Then a huge screen was layered behind all that, along with a rectangular screen out in front of the stage that hung from the rafters.

This created a sense of depth as the band could show similar or different images on varying screens, and bring the show down to a club level using only the small screen behind the stage or blow it out by putting them all in motion.

Not surprisingly the set list leaned heavily on tracks from Brothers (6) and El Camino (7). It would have been nice if they spared a couple of these for some deeper cuts off their earlier discs, but each CD was represented.

I eagerly anticipated the 12,000-person sing along for “Gold on the Ceiling,” and it didn’t disappoint. The energy level shot through the roof.

Then Auerbach and Carney did something truly brilliant. They asked the crowd if it would be ok for the bass and keyboard players to take a break so the two of them could jam together.

They ripped into Thickfreakness and the volume level jumped up. I honestly think they’re better alone. The new songs are great, but with the additional band members, Auerbach has to worry about hitting his marks and what the other guys are doing. Alone he’s free to rip it.

Check this sick version of Girl Is On My Mind. The control and pacing is epic in a room this size.

Smartly they utilized Little Black Submarines as the vessel to re-introduce the band. The slow lead-in with just Dan, > then Patrick, > then DAMNS! (was a definite moment).

These two songs and the inclusion of Ten Cent Pistol were the highlight for me. The power songs are great, but these three demonstrate how far the Black Keys have come and the potential for what they have to offer yet.

The Black Keys face a new reality these days. With success comes certain burdens. They must deliver a professional set every night, with video choreography tied to the set list, so no deviation night in and night out.

Also, this is a knowledgeable crowd. They know all the songs, and hang on every chord, so the pressure is on Auerbach to hit each note perfect or it gets scrutinized as meaning something different, at least fans see it that way often.

In the end this was a gratuitously fun night of live music. The Black Keys do what they do. It isn’t revolutionary. Cream did it long before, and the White Stripes have been at it longer, but what they do, they do really well and with authenticity. Auerbach and Carney play beautifully together and with such clean volume and power.

Yes they could have played OHIO, that would have brought the house down, but what can you do. 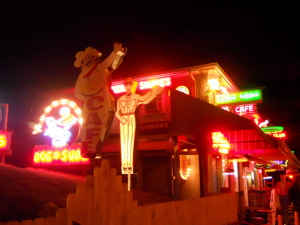 We got out of the show and needed food. With the heavy weather on the way up we didn’t have a chance to eat prior.

I knew of two options open this late, chili or burgers. I have yet to sample any of the classic chili houses Cincinnati has to offer. We all know Skyline and Gold Star, but the real action is at places like Price Hill Chili. Considering what we had consumed we thought maybe another time. Chili requires coordination and work to not end up wearing a bowl of 3-way.

Instead a burger sounded more up our ally, and at this hour the place to go is Terry’s Turf Club, serving until 2:30 a.m. 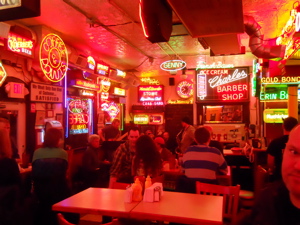 The dementia inside the Turf Club around midnight.

Thank goodness for GPS, because this place is out by itself on the east end of Cincinnati.

Terry’s is nothing if not unique. From the density of neon signage inside and out, to its cool local beer selection, and old-styled coolers, Terry’s has a vibrancy, and serves opulent burgers for under $8.

This place seats 50 people and stays full. We walked in and there was a brief wait. Surprisingly, a New Orleans-styled jazz band was playing in one corner. The dim red and yellow lighting suited our eyes, having just come from a concert. We decompressed, I ordered a filet mignon burger to go and away we went into the night.