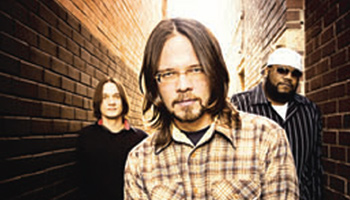 Yes the NCAA basketball tournament is on, but UK, Louisville and Murray State don’t play till tomorrow. If you want to get away from the stress of your brackets, there’s some strong, lo-country blues going to be delivered by the North Mississippi Allstars tonight at Headliners in Louisville.

Started in 1996, the North Mississippi Allstars are a Southern blues band from Hernando, Miss., with roots running deeper in the blues side of the genre than rock.

There are comparisons to The Allman Brothers Band, but these boys have more B.B. King and John Lee Hooker in them than Skynyrd. It’s straight country blues with a mean howl attached to it.

The Allstars’ first release, Shake Hands With Shorty, was nominated for a Grammy Award for “Best Contemporary Blues Album.”

Luther’s unique ability to animate and pace a song with his guitar is a dying art. He’s one of the finest freestyle blues guitarist alive today. His guitar is like a fourth member of the band, with a voice all its own.

[Listen to the North Mississippi Allstars]

This is a family affair for the Dickinson boys. Their father, Jim Dickinson, was a noted musician and record producer in Memphis, Tenn., who played with the likes of Bob Dylan, the Rolling Stones and Ry Cooder. From his teachings of how to live and play music came the North Mississippi Allstars.

What makes a show like the one tonight especially attractive is bringing a guitarist like Luther Dickinson down from a stage where he routinely plays before arena-size crowds and place him at a general admission concert jamming with a few hundred people. His guitar will soar in a venue of this size.

While Jim Dickinson passed away in August 2009, the band continues to live in his light by operating out of the Mississippi recording studio Luther and Cody’s father set up, known as Zebra Ranch.

Come get your spirit lifted tonight by the North Mississippi Allstars.