Posted on February 15, 2011 by theurbanllama

Coming through Mobile, Alabama, I knew there was some excellent BBQ to be had, but hadn’t found the right spot. Dreamland (www.dreamlandbbq.com), based out of Tuscaloosa, Ala., and The Shed (theshedbbq.com), from Ocean Springs, Miss., both have a presence in Mobile and are excellent, but I was seeking something independently local.

After some research, The Brick Pit (brickpit.com) jumped out from its competitors as a bona fide “barbecue joint.” Considering it’s a relatively small establishment, it has racked up some big time accolades.

The Travel Channel named it one of  “America’s 101 Tastiest Places to Chow Down,” it won 1st place in the rib competition on the Food Network’s “All American Tailgait Cookoff,” and The Brick Pit was chosen as one of the five best BBQ restaurants in the South by the Atlanta Journal-Constitution. 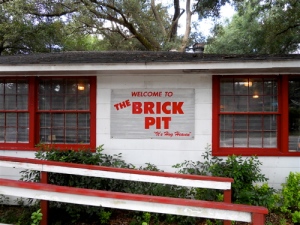 Outside the main entrance of The Brick Pit.

The restaurant is operated inside an old house and sits back off the road a piece. Parking is available out front and around back, where trees shade the whole area – a welcomed benefit on a hot sunny southern day.

As I pulled in two men were tending a large black smoker along the side of the restaurant, and I could taste the smoky essence of the infused wood and pork.

This setting is all a BBQ connoisseur could imagine: a hole in the wall establishment, smokers going out back and three menu items only: pulled pork, ribs or chicken.

The Owner, Bill Armbrecht, and pitmaster Jerry Edwards have a shared philosophy, to do everything slowly, just as it should be. And that simple sentiment is what sets apart the barbecue at The Brick Pit.

This old house doesn’t have an oven, so all the cooking gets done in the pit. Armbrecht built a large, red, room-sized smoker out back amongst the trees, known affectionately as “Big Red.” Never forget we are DEEP in Alabama football country, where everything is better red. Roll Tide! (My apologies to the current college football champions at Auburn – War Eagle!)

The Brick Pit smokes with a wood mixture, 75 percent pecan and 25 percent hickory, and the ribs don’t get spiced before they go on the pit – the smoke does all the flavoring. 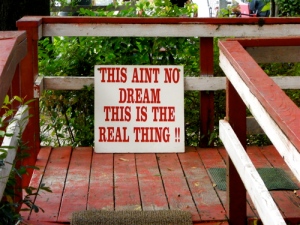 Evidence of the good-natured rivalry between The Brick Pit and its more corporate expansive BBQ brethren from outside Mobile, perched noticeably on the ramp leading up to the main entrance.

Then it cooks low and slow. That’s low temperature for as long as possible.  The pork shoulder is in there for 30 hours, the ribs go for 12 and the chicken is smoked 6 to 8 hours. The fat in the meat serves as a natural moisturizing element during this long cooking process.

Not many places take the time to cook ribs this long. As a result, the pork is tantalizingly tender. It melts in your mouth. The rib meat can be plucked off the bone with a finger’s touch and the hand-pulled pork is juicy and thick, interspersed with crunchy charred bits from the crust of the pork shoulder.

Coating the pork and chicken is a thick, tomato-based sauce, not too spicy, but adds a tangy flavor that brings out the smoky essence in the meat. The sauce is also cooked up inside the pit, as are the baked beans. 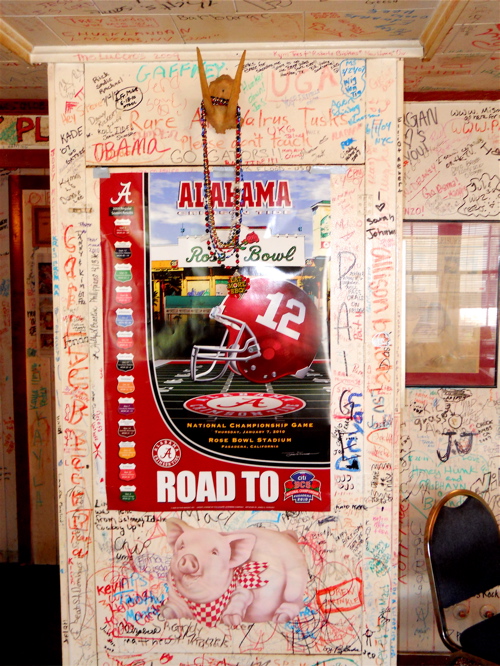 Bring along a Sharpie to The Brick Pit and add to the ambiance.

Everything is made from scratch at The Brick Pit. Mrs. Iona Waits comes in daily to make her decadent homemade banana pudding. It comes served in a styrofoam bowl, no frills, just like The Brick Pit, and has a devoted following of its own.

Orders are taken from a window in the back of the dining room. There’s sufficient seating for dine-in, but it’s evident by the number of folks waiting on pick-up orders that The Brick Pit does a robust carry-out business.

Patrons and fans alike pay homage to this “House of Pig” by scribbling testaments, well wishes and salutations to The Brick Pit across its walls, doors and ceiling – mostly in red markers, creating a loud “Thank You” in Alabama parlance for all to see. It makes for interesting reading while waiting on my order.

As one sign reads, “Welcome to the Best Damn Smoked Bar-B-Que in the Great State of Alabama.” Who am I to argue with a man who smokes his pulled pork 30 hours.