Gettin’ Fed at The Shed

Posted on February 8, 2011 by theurbanllama

I’ll admit from the get go that I am a “Ho” for barbecue. Whether I’m traveling for other purposes or just to obtain some of this mouth-watering smoky goodness, all it takes is a rumor of a decent barbecue joint and I’ll divert over 100 miles to snatch some up.

Whether it’s a shack by the side of the road, a smoker on wheels by the gas station or some displaced Texan offering BBQ brisket from the backroom of a bar – honestly the more ramshackle the joint, often the better the BBQ.

Since I was going to be traveling through southern Louisiana, Mississippi and Alabama anyway, it was a no brainer to poke around on the Internet and ask folks about good dive joints along the way.

I was planning to eat seafood and Cajun fare mostly, but as much as I adore both those styles of cuisine, I like to break up the flavors and give my palate a chance to recharge.

Cajun food is simple in concept, but complicated with its bouquet of flavors as all the ingredients cook up, while seafood is much more stripped down, with only light seasoning, butter and lemon added to accent the fresh catch.

So I’m putting BBQ in an unfamiliar spot, to serve as a cleansing meal between spicy Cajun dishes and the milder seafood. As you can tell I’m eating light and healthy — NOT!

In my constant search for quality dive establishments I came across The Shed in Ocean Springs, Miss. The place really is a shed. The story goes that owner, Brad Orrison, had an unusual hobby while attending college at the University of Mississippi – he collected trash. And I don’t mean like a garbage man. Brad was a first class dumpster diver.

The main entrance to The Shed in Ocean Springs, Miss. “Come get fed at The Shed.”

His favorite time of the week was the night before trash day, when the street side garbage piles were at their height and dumpsters were brimming full. Brad could be found combing through used two-by-fours, old tin roofing, bent nails, ugly windows, old plastic buckets and warped records – it was pure junk, but he refused to part with any of it.

After graduation, he constructed a trailer from his cache of debris, loaded the remaining refuge onboard and returned to Ocean Springs.

It was during a dumpster dive one evening, while knee-deep in warped hardwood flooring, that Orrison, 24, had an epiphany: that he should build his own BBQ joint.

With the help of his sister Brooke, 19, they hammered together the beginnings of The Shed. After practicing their smoking and timing techniques for the meats, and Brad got his secret Shed rub down to perfection, all they needed was a sauce.

In stepped Robert “Poppa Jack” Jackson, who had retired from the military, and relocated to the Mississippi Gulf Coast. Poppa Jack had been working on his BBQ sauce for over 20 years, testing it from Naples, Italy to Grand Forks, ND. He had considered marketing the sauce, and after a fortuitous crossing of paths between Brad Orrison’s aunt and Poppa Jack – that’s how The Shed found the man who makes the sauce.

As they say down in Ocean Springs: “Wham!!! Bam!! The RUB, the SAUCE, THE SHED!” It’s referred to as Poppa Jack’s Shed Spread.

He started out delivering only three gallons of sauce in mason jars, but prior to his passing in 2002, at the age of 51, Poppa Jack was crafting 50 gallon batches in his huge cooking pot, engraved with his name on it.

Prior to making his last batch he insisted Brad memorize the ingredients – wanting to eliminate the recipe on paper, that way only the two of them would know the secret. It took Brad 11 months to get the sauce just like Poppa Jack used to make, and nine years later the sauce and The Shed continue to grow in stature. 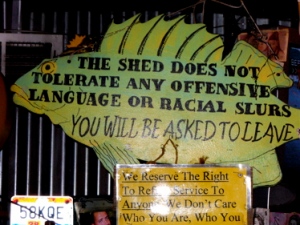 It can get rowdy in The Shed – do be kind to each other. Even rival SEC fans should be able to chill over good BBQ.

Yet the Shed is not just a BBQ joint. It’s a first class blues music venue as well. A couple of months after The Shed opened, Orrison’s brother, Brett, 22, came on board as the sound engineer and entertainment director. A stand alone stage was built outside the main venue, and long picnic-style benches and tables were erected to maximize seating and eating.

The BBQ is plenty good enough on its own, but the music makes The Shed into a gathering place. It reminds me some of Buddy Guy’s club in Chicago, Legends (http://buddyguys.com).

The Shed has this killer down home comfort food, sizzling blues music and room outside to dance around under the stars when the mood strikes – it’s dinner theater for those bent on relaxation.

Over the last nine years The Shed has spent $700,000 bringing the Blues to the coast (not including their annual blues festival), all free to the public. That’s what they’re doing to keep the Blues alive. Artists have included Buddy Guy, PineTop Perkins, Bob Stroger, Willy “Big Eyes” Smith, Walter “Wolfman” Washington and his Roadmasters, the North Mississippi AllStars and Kenny Wayne Shepherd.

The Shed began as a 300 square foot takeout stand, but after locals sampled the tangy BBQ, they wanted to help the Orrisons facilitate the crowds that began showing up. So as a takeoff on the Grateful Dead’s devoted fan base, known as “Dead Heads,” frequent flyers at The Shed are, you guessed it, “ShedHeds.”

Over the years, the ShedHeds have brought along their own collected waste and debris, and assisted with 39 expansions on the original carry-out window in Ocean Springs, morphing it into a 6,500 square foot screened-in back porch essentially. 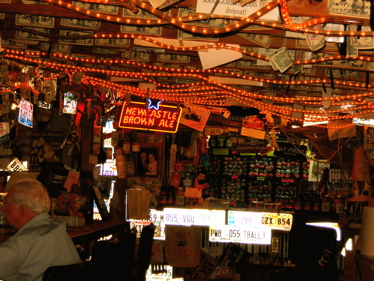 Low light and debris for as wide as the eye can see inside the bar area and main dining room (if you can call it that).

Currently there are six Shed locations, all different, but the original, located 100 miles from New Orleans, and 20 minutes from Biloxi, remains unique. The place looks like it’s had 39 additions – it ebbs and flows, and continues moving along where you can tell it used to stop, nothing matches, the floors are warped, definitely watch your step going from one room to the next, there’s pig art all about, and most of the place is lit up with Christmas lights.

I wonder if the fire marshal has been by recently for an inspection. 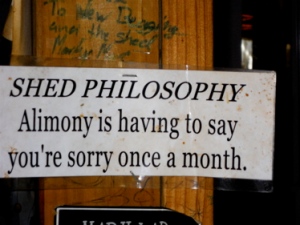 Careful what you learn at The Shed.

Filling in the open crevices tend to be dollar bills, license plates and cards or placards with bits of “The Shed’s Philosophy” written upon them. This atmosphere runs up every wall and across the ceilings. Even the wood tables, benches and post are not exempt. Customers have taken to writing or carving their own sayings or remembrances into the wood.

Orders can be placed at the carry-out window or at the bar. Then take a seat and wait for your name to be called. The rack of baby back ribs is majestic and tender, while the pulled pork is succulent, moist and full of flavor. Most anything on the menu will feed more than one person, especially with the sides, but I prefer “To-Go” portions, so there’s a snack for later.

The wings are decent, hearty, a tad too much on the BBQ side for me, but go great with a beer. There’s a television above the bar and this is an amusing place to try to watch a college football game – especially if it involves SEC teams.

The Shed was nominated for their pulled pork sandwich to vie for the Ultimate Hometown Grill Off Recipe on the Live! Regis and Kelly Show. The Orrisons flew up to New York, slow smoked the pork shoulder and came home with the trophy, along with a full spread in the March issue of Better Homes and Gardens.

Admittedly the pig emblem and some of the sayings do come across as slightly heavy on the marketing side, but the folks here believe in what they’re doing and have managed to prevent the expanded locations from being cookie-cutter reproductions. They smoke a ton of meat a day at the Ocean Springs location, every day, so drop by and help add to The Shed. Brad’s a little busy these days for dumpster diving.

This entry was posted in Food, Reviews, Travel and tagged barbecue, bbq, Ocean Springs, The Shed. Bookmark the permalink.

1 Response to Gettin’ Fed at The Shed