August 2019 marked the 50th anniversary of Woodstock, the granddaddy of all music festivals. It wasn’t the biggest festival ever, and certainly not a profitable endeavor, at least not initially. What set Woodstock apart was its agrarian nature. Set amongst the rolling terrain of the Catskill Mountains, organizers cobbled together this ginormous festival by the proverbial seat of their pants, lacking adequate planning or logistical support, and yet with a heaping dose of peace and love, a magical moment in time was created.

It was not supposed to be possible. The powers that be in 1969 remained in a 1950s mindset. The hippie movement that coalesced into a counterculture revolution was a rebuke of the establishment’s restrictive mindset, and manifested its identity into protest over the Vietnam War.

This same brand of regressive thinking was exemplified by elected or appointed leaders at all levels across America’s cities, townships and states. The idea of throwing together an event the size and scope of Woodstock, with as little planning as took place was inconceivable by the older generation. Especially when it was being done by a bunch of hippies. But the freaks pulled it together and Woodstock’s success went worldwide.

The assembled mass of Woodstock.

Four guys, Artie Kornfeld, Michael Lang, John P. Roberts and Joel Rosenman, had a plan to open a recording studio in Woodstock, and thought it would be a cool idea to host a music fest in the farmlands of southeast New York, as a way to promote their endeavor.

Billed as an “Aquarian Exposition: 3 Days of Peace & Music,” Woodstock took place August 15-18, 1969, on Max Yasgur’s dairy farm in the town of Bethel, NY, 80 miles northwest of New York City. It became a counterculture pilgrimage made by more than 400,000 attendees. By its conclusion Woodstock was a historic milestone.

The festival set out as a money making venture. Tickets for the three-day event cost $18 in advance and $24 at the gate (the equivalent of $130 and $170 today). Around 186,000 advance tickets were sold, and organizers anticipated as many as 200,000 attendees. It was the other 200,000 that chose to show up that forced organizers to declare Woodstock a free event. 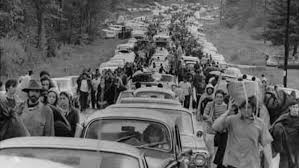 The backup of cars, and pedestrians heading to Woodstock.

Traffic completely overwhelmed the rural roadways. Instead of frustration, people just abandoned their vehicles, not on the side of the road, but in the road. Then walked the rest of the way. They kept coming. By the thousands to tiny Bethel. With tickets and without. The fences came down. Torrential rain fell. There was mud, music, love and a shared belief in companionship by the assembled masses.

With the roads log-jammed, once initial festivalgoers arrived they were stuck until Monday. The miles of abandoned vehicles served as a buffer to cut off the outside world. A state of emergency was declared by Sullivan County. Musicians, food, water, first aid supplies and those requiring serious medical attention had to be transported by helicopter into or out of the venue.

Traveling from every corner of America and beyond, they no longer were strangers once reaching Woodstock. This quagmire of humanity took it upon themselves to share whatever they brought (food, drink, shelter, blankets, drugs) with their adopted brothers and sisters. It all became possible, “With A Little Help From My Friends,” as Joe Cocker would famously sing on Sunday.

There was a genuine camaraderie, a solidarity, among members of “Woodstock Nation.” They were vested in taking care of each other. To that end the Hog Farm hippie commune provided free food to thousands. It was this willingness to accept without judgment that cast the “Be-In”/”Love-in” culture apart from society at large. They weren’t trying to game the system. They simply didn’t want to participate in what was considered antiquated thinking and an unnecessary evil of U.S. involvement in the Vietnam War. 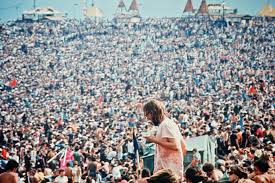 As Woodstock roared to life, the venue had become a city unto itself. No way in, no way out, just 400,000 people living in the moment. Inside the venue not one sign of corporate sponsorship or a commercial entity existed. It was total lo-fi. Admittedly, organizers didn’t have a handle on traffic, food, security, bathrooms, sanitation, first aid or transportation, but who does when 400,000 people show up to party for three-plus days. Still, Woodstock was legit. It was the ultimate scene to make.

Organizers recognized the innate necessity to assemble a roster of headlining acts that had credence in the hippie movement. To make that happen it required paying the bigger acts double their going rates – and they wanted it up front before hitting the stage.

Several top artists turned down invitations, like The Byrds, The Doors, Bob Dylan, John Lennon, Led Zeppelin and the Rolling Stones. As the scene unfolded rumors circulated that bands were no longer getting paid. Some artists threatened to back out, which necessitated organizers convince a local bank to open after hours and provide them an emergency loan.

Jimi Hendrix was the top headliner, playing with his new band Gypsy Sun and Rainbows, or a Band of Gypsies. The British invasion was represented by The Who. The funk scene was fronted by Sly and the Family Stone. The hippie/anti-government movement was saturated with the likes of the Grateful Dead, Jefferson Airplane, Janis Joplin, Joe Cocker, Crosby Stills, Nash & Young, Creedence Clearwater Revival and The Band. 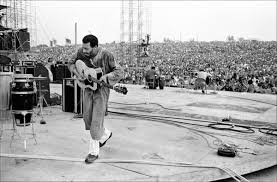 Ritchie Havens on stage at Woodstock.

Ritchie Havens kicked off the festival. He and his band drove up from NYC early, and since the scheduled opener, Sweetwater, was stuck in traffic, Havens played for some three hours to cover time. His intense performance of Freedom was spellbinding. This was one of a handful of sets by certain performers that defined their careers going forward. Another was at 2PM Saturday, when Carlos Santana, 22, a relatively unknown guitar virtuoso, who happened to be whacked out of his mind on mescaline, turned in an improvisational set that launched his superstar career.

Can you imagine Sly and the Family Stone ripping into I Want to Take you Higher, at 4AM. That was some crazy shit right there.

The following afternoon, Joe Cocker and The Grease Band played a career defining set, filled with Cocker’s manic gyrations. He was followed by the likes of Country Joe and the Fish, Ten Years After, The Band, and CSN&Y. Again they played all night.

It was 9AM Monday morning when Jimi Hendrix took the stage for his two-plus hour closing set at Woodstock. By then the vast majority of the crowd had begun their journeys home – tired, hungry and damp. Some 30,000 people remained across the litter-strewn dairy farm to observe what many critics have deemed the singular greatest musical moment of the 1960s – if not the greatest rock concert in history. 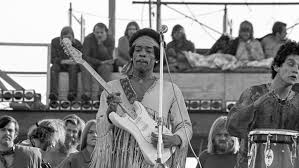 Hendrix’s interpretation of The Star-Spangled Banner, with its wailing feedback and irreverent distortion, remains groundbreaking, and a creative symbol artists continue to derive inspiration from today.

A sizable taste of this mega festival was captured in the 1970 Oscar-winning documentary by Michael Wadleigh. That same year Woodstock: Music from the Original Soundtrack and More, was released. The three LP set went to No. 1 on Billboard’s top records chart. In 1971, the double album Woodstock Two came out and went gold.

Since then several expanded musical releases have followed, including Woodstock – Back to the Garden: The Definitive 50th Anniversary Archive, a 38-CD, 36-hour, 432-song box set of nearly every note played at the original festival. Additionally, full Woodstock sets by individual acts like Hendrix, Joplin, Grateful Dead and CCR were made available. As have expanded documentaries examining Woodstock’s lasting impact after time allowed for additional perspective.

Immense optimism exuded coming out of Woodstock. The popular thought was why not do it again. This was tried at Altamont. The Rolling Stones did a polite pass when pitched the Woodstock gig. This time the Glimmer Twins were the showcase, along with numerous acts from Woodstock’s roster. The Stones brought in the Hells Angels to run security. For beer money of course. What could go wrong?

The Altamont Speedway Free Festival was to be the crowning jewel of the 1960s. Held in Livermore, CA, situated on the eastern edge of the San Francisco Bay Area, Altamont took place on Saturday, December 6, 1969. This was the chance for the West Coast to shine, as California was home to the counterculture movement.

Some 300,000 journeyed to witness the death of hippiedom. One man was stabbed to death, and three others died accidentally; two caused by a hit-and-run car accident, and one by LSD-induced drowning in an irrigation canal.

Considerable violence took place across the venue. Much of it instigated by the Hells Angels. By most accounts there was a foul spirit in the air from the outset of Altamont.

According to Grace Slick of the Jefferson Airplane, “The vibes were bad. Something was very peculiar, not particularly bad, just real peculiar. It was that kind of hazy, abrasive and unsure day. I had expected the loving vibes of Woodstock but that isn’t coming at me. This was a whole different thing.” 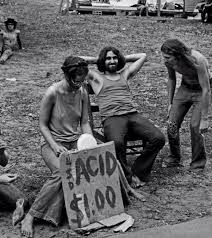 There was no shortage of affordable hallucinogenics at Woodstock – but watch the brown acid.

Still, as poorly as Altamont came off, Woodstock endured. It was the clarifying moment of the 1960s, captured in a bottle. Yet its afterglow disintegrated on impact in the 1970s. Hippiedom ran counter to America’s capitalistic society, and its consumer-based operating system.

The smell of money was in the air. Greed. The rat race to the top of the corporate ladder was off and running. Gone were the days when one could get by with just a little help from your friends. The rock-n-roll kept on chooglin’ – by all means love the one you’re with, but several notable musicians who played Woodstock failed to survive the 1970s. As for attendees, if one wanted to afford that house, a car, 2.5 kids and the status quo Madison Avenue was marketing, it took money and a real job.

The 25th anniversary show, dubbed Woodstock ’94, took place August 12-14, 1994, on Winston Farm, just west of Saugerties, NY, some 70 miles northeast of the 1969 original. Promoted as “2 More Days of Peace and Music,” two familiar scenarios unfolded with predictable outcomes. Though some 164,000 tickets were sold, 550,000 attendees showed up for the concert, overwhelming the venue and facilities. Rain was persistent throughout the weekend. Mud pits, mud fights and mud slides were the most memorable entrants of this revival.

Organizers seemed intent on bringing 1969 back to life, but that is a tough ask when hard edged bands like Nine Inch Nails, Limp Bizkit, Red Hot Chili Peppers, Metallica, and Rage Against the Machine are featured. Great bands all, but not your chill and hug type of music.

Some of the original Woodstock organizers sought to throw a 50th anniversary festival. Potential host venues proved less than enthusiastic about taking the legal risk of holding a mass event that had more than a better’s chance of going sideways with the whole world watching.

Lightning in a bottle. It’s nearly impossible to catch twice.

Over time Woodstock did become profitable for its original planners. Through books, movies, soundtracks, merchandising and spinoff concerts. Woodstock became a way of life, a trademark, that homogenized the experience, which I can’t imagine was the intention of the organizers, but times change.

The 1960s were idyllic in concept. Though only a decade, over those 10 years a cultural impact was unleashed that continues to reach across generations. The audacious freedom to express one’s self, owning your sexuality, empowering young people in the political process, and artistic individuality – these fundamentals were released from captivity as a result of the 1960s counterculture movement.

No longer could society turn a blind eye to its children, expecting young people to simply sit in the corner quietly. It was okay to let your freak flag fly. Woodstock was a celebration of these personal freedoms realized, and became a tangible calling card through time for what is possible.

In 2017, the Woodstock site became listed on the National Register of Historic Places.