Railbird Music Festival is Feast for the Senses

Jack White of The Raconteurs performing Saturday night at Railbird.

The inaugural Railbird music festival, held August 10-11 in Lexington, left the gate as a long shot, but for all who attended, it paid off like hitting an exacta on Derby Day. Held across the picturesque grounds at the Keeneland horse racing track, the event left a lasting impression with its friendly staff, upscale amenities and broad spectrum of musical talent.

To be honest, my choice to attend Railbird was predominantly influenced by the inclusion of The Raconteurs headlining Saturday night. Jack White, of White Stripes fame, is a guitar god, and alt-rock pioneer. He is one of a select few musicians from the current generation who has crafted a lasting career across numerous incarnations, and left an indelible mark upon popular music.

When the White Stripes stopped playing in 2007, White, who hails from Detroit, MI, joined forces with the existing members of The Greenhornes, to form The Raconteurs. This became White’s rock-n-roll band. They cut two commercially successful discs together, Broken Boy Soldiers and Consolers of the Lonely. After this, White, along with The Greenhornes’ bassist Jack Lawrence, left to hook up with Alison Mosshart from the Kills, and Dean Fertita from Queens of the Stone Age – to form The Dead Weather.

Maia and the Urban Llama on grounds @ Railbird.

This engagement also proved commercially successful, even with Jack White choosing to serve as the drummer in this supergroup. White has since embarked on a multi-disc solo career, and resides in Nashville, TN, where he formed Third Man Records, an independent record label, whose headquarters serves as a record store and performance space.

The Raconteurs got back together in 2018, releasing two singles. These both ended up on the band’s June 2019 disc, Help Me Stranger. A world tour was scheduled to accompany their Billboard No. 1 album, including a stop on a gorgeous Saturday night in Lexington at the Railbird Festival.

General admission tickets for the weekend were $140 each. Yes that would be a tad extravagant to see only The Raconteurs – but they were by no means playing alone. Other headliners included Gary Clark Jr., Tyler Childers, Hozier, Brandi Carlile, Old Crow Medicine Show, Mavis Staples, Lucinda Williams, and St. Paul and the Broken Bones, to name a few.

This diverse assemblage of musical acts by organizers was ambitious for public consumption. It could have fallen apart with their attempts to meld country acts with alternative, blues, funk, gospel and pop – but the right mix of talent enabled folks to dive in head first into unknown genres and uncover common ground amongst unfamiliar artists that led to a marvelous weekend of discovery.

Our daughter Isabella joined us @ Railbird on Sunday for the festivities.

It was super helpful that Railbird offered a layaway option for tickets. Two general admission passes, with all applicable fees and handling charges came to $352. I paid an initial $68.10 to hold the tickets, and then four payments of $70.98 over the next three months.

Another selling point for this fest was it only took place on the weekend. This meant I didn’t have to burn leave to attend Friday shows, in turn Railbird didn’t dilute its talent by attempting three days of music. This made attending cheaper, and offered less wear and tear on my body.

Parking was super easy, at least entering Keeneland. Re-entry to the venue was allowed on tickets, so attendees could dip out to their cars, where many had coolers and chairs. Folks parked near the stages could tailgate and still hear performances, if not see the bands on stage. The venue was easy to navigate, with a plethora of food and drink options, especially high end bourbon and craft cocktails.

For me Saturday remained all about The Raconteurs, but no doubt Low Cut Connie earned some fans with their full-on stage acrobatics. The voice alone from Mavis Staples, 80, was enough to stop many in their tracks. She belted out funk driven rock and blues to go with her gospel roots. Staples did wonderful takes on Slippery People from the Talking Heads, and For What It’s Worth by Buffalo Springfield.

Entering the 7:30PM sets it became time to start strategically thinking about getting into position for The Raconteurs. Considering the number of folks who clearly came to see Brandi Carlile I felt obliged to check her out, and I must say she won me over. Her determination, voice and stagecraft were impressive. She ripped a wonderful take on Babe, I’m Gonna Leave You, popularized by Led Zeppelin. A few songs later she showed off her platinum pipes with a cover of A Case of You by Joni Mitchell. 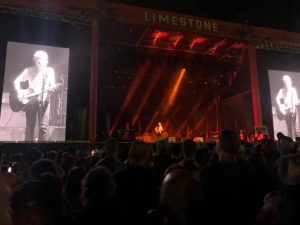 Brendan Benson of The Raconteurs.

I wanted to see Old Crow Medicine Show, but they were playing on the Elkhorn Stage at the far end of the venue. We chose instead to stake out a prime spot left of the Limestone Stage ahead of The Raconteurs set.

The boys from Nashville did not disappoint. Jack White exploded onto the stage, pumping his arms as he fed off the raw energy emanating from the growing crowd. It was quickly clear some of the more gentile in the audience who stuck around to see what all the fuss was about were not down with the rambunctious sounds, and they could be seen streaming for the exits after the opening track. For the rest of us, it was a decadent treat to witness a master in his element.

THE RACONTEURS – YOU DON’T UNDERSTAND ME

I particularly enjoyed White on piano for You Don’t Understand Me, and the ragged glory of Carolina Drama, a murder ballad from the band’s sophomore release. Only Child, off the new disc, was also a concert standout.

THE RACONTEURS – STEADY AS SHE GOES 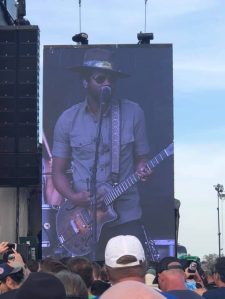 Sunday was more chill. Railbird allowed kids 10 and under to attend for free, so Maia and I brought our 7-year old, Isabella, with us to rampage across the hillsides.

Major props to the Fruit Bats. These Chicago boys were at their alt-folk best, throwing trippy vibes to a packed lawn at the Burl Stage. My priority show for the day was Gary Clark Jr. This Austin, TX, blues-guitarist menaced the stage with his trademark scowl, blistering out notes from his six-string sidearm. He was channeling a serious Curtis Mayfield vibe, in his wide-brimmed hat and sunglasses. The man was cool before the term was invented.

Honorable mentions go to St. Paul and the Broken Bones, Lucinda Williams and the festival closing act, Hozier. This Irish vocalist gave expansive renditions of his pop ballads, blending layers of sound and voice perfect for display at a large outdoor venue.

Hands down my surprise performance of the festival and arguably favorite set belonged to Kentucky’s own Tyler Childers. Each song seemed to have a building drama to it, with signature catch lines the crowd knew well. These were narrative-driven tales, mixing bluegrass, with country, folk and Americana rock.

Childers emotional delivery and intense stare let on these were autobiographical tales of excess and tragedy. His songs were a fitting soundtrack to inspired drinking and painted a vintage romance about small town country life. He had me with his set’s strong opening of House Fire, Whitehouse Road, Redneck Romeo, and Country Squire. This Lawrence County native was spitting fire from the jump as the crowd gave Childers an enthusiastic homecoming embrace.

About midway through Childers played his current hit, All Your’n. For those who watch SEC football, which are legion in this part of the country, Childers’ song is the soundtrack to a current advertisement for SEC Football’s “We Love It Here” campaign. Even on the vast expanse of a main stage lawn, Tyler Childers cooked up what felt like a intimate house party.

Railbird returns August 22 & 23, 2020. We will see if Railbird organizers have another carefully curated festival roster of artists to offer, but their first effort was cash money. If they can come close for a sophomore edition I’ll wager on attending again.