Posted on February 9, 2019 by theurbanllama

Donald Trump delivered his State of the Union address to a joint session of Congress on Tuesday in what was billed by the administration as a pivot toward unity for the president in the aftermath of his record-setting 35 day government shutdown. Don’t get too excited. Any conciliatory overtones were merely window dressing.

The sweeping rhetoric about working across party lines, not just for ending gridlock but to govern “as one nation” for the American people – might be pleasant to the untrained ear, but The Donald’s wicked tongue could not be held.

Teleprompter speeches are not Trump’s strong suit. He is a carnival barker at his core. A huckster who likes to sell his pitch to thundering applause before its noticed a swindle is underfoot. A further listen revealed the same nativist policies he continues to drive with fear to whip up a base that is willingly hoodwinked for their own isolationist pursuits.

The border wall and fictitious caravans of alien hordes comprised of drug trafficking-rapist-terrorists got full play, but no mention of the pain caused to American families and businesses by his shuttering of the government. Nor did he have the stones to mention what his intention would be in terms of closing the government again come Feb. 15 if no consensus was reached.

There was mention of infrastructure rebuilding, ending childhood cancer, reducing the cost of prescription drugs, protecting those with pre-existing conditions – but virtually no details were provided, nor were any legislative initiatives introduced.

In fact several of those utterances are laughable, as anyone who follows politics recognizes Trump and his Republicans have actively been working on the state and national level to strip away protections, like mandating coverage for those with pre-existing conditions.

The night got off to a poor start when Trump failed to display the dignity and grace of congratulating Speaker Nancy Pelosi on her and the Democrats returning to power. Various presidents from either party who similarly took a beating like Trump did in the midterms, realized it was the will of the people, and if truly there was an interest by this White House to make a bipartisan turn toward governing, recognition would have been given.

Instead we were fed garbage about how if Trump wasn’t elected the country would be at war with North Korea. It was he alone who prevented this carnage. Now the fact that Kim Jong-un continues to not abide by the dismantling of North Korea’s nuclear missile program is an inconvenient truth. But this president knows more than all the generals. 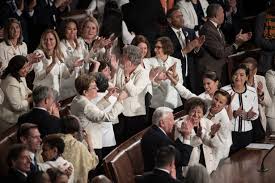 Some of the more than 100 women elected to Congress, who wore white to honor the women’s suffrage movement that led to the ratification of the 19th Amendment in 1920.

“We must reject the politics of revenge, resistance and retribution, and embrace the boundless potential of cooperation, compromise and the common good,” declared Trump.

Please stop. Revenge and retribution are all this man does. He takes to Twitter against anyone who criticizes him and calls them an “enemy of the people.” Probably not the best sales pitch for a guy personally under investigation for potentially treasonous crimes.

There were plenty of lovely special guests introduced as the speech kept going for 80-plus minutes. The quote of the night was a threat to members of Congress and the judiciary.

“An economic miracle is taking place in the United States, and the only thing that can stop it are foolish wars, politics, or ridiculous, partisan investigations,” said Trump. “If there is going to be peace and legislation, there cannot be war and investigation. It just doesn’t work that way!”

Just maybe it’s finally dawning on this dunderhead how many of his boys have been indicted, plead guilty, and given evidence against him. An innocent person would welcome an oversight investigation to clear their name. Trump is petrified. He and several of his family members are looking good to prosecutors for collusion and obstruction surrounding election meddling and conspiring with a hostile foreign government. 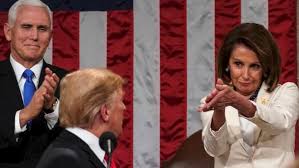 Speaker Pelosi provided the framing context for the evening’s festivities, as she delivered a devastating clap-back that instantly went viral across social media.

After Trump’s attempt at sincerity in delivering his line about rejecting revenge over cooperation, Pelosi stood, making sure to lock eyes with the president as he turned toward her, and extended her arms to give a pity-clap to the doomed and drowning Commander-in-Chief, with a knowing look that she was coming for this chump.

The following day Christine Pelosi, the Speaker’s daughter, posted the following on Twitter, “#WayBackWednesday – Oh yes that clap took me back to the teen years. She knows. And she knows that you know. And frankly she’s disappointed that you thought this would work. But here’s a clap. #YouTriedIt.”

The speech in many ways was classic Trump. Instead of just being true to his identity and advocating for an authoritarian regime, he delivered this ham-fisted diatribe with the transparency of a pig wearing lipstick and a ball gown. Generally speaking, when this level of masquerade is required to get over on an audience it usually signals the end is near.

Hey Donald, welcome to Democratic control in the House of Representatives!

This entry was posted in News, Politics, Uncategorized and tagged Christine Pelosi, Clap-back, Nancy Pelosi, The Donald. Bookmark the permalink.