Shack in the Back BBQ is Hickory Smoked Perfection

There is something instantly recognizable about a plume of hickory smoke filling the air. That’s barbecue baby, and that distinct fragrance means it’s close by. On a recent jaunt to Jefferson Memorial Forest, located just south of Louisville off I-265 (Gene Snyder Freeway)/KY-841 W in Fairdale, I caught a big whiff of hickory that caused me to deviate from my path back to the interstate.

Amidst a smattering of ordinary commercial properties sat a diminutive wood cabin with a drive-thru window. This it turns out was Shack in the Back BBQ. I’ve known of this restaurant’s existence for some years, but failed to comprehend where it was located and actually make the journey. This turned out to be my day for some Shack in the Back.

Pulling around to park I noticed the heaping stack of hickory wood piled up outside the pit area. Owners Mike and Barbara Sivells subscribe to a traditional, wood-smoked barbecue methodology to cooking their meats. This sinks that smoke ring in even deeper than most typical commercial smoking techniques, and brings out a deeper flavor in the finished product.

Opened in 2006, this old school barbecue haven is built around a 19th century log cabin. Inside exposed wood beams give off a rustic feel as vintage photographs line the walls, accentuating a trip back to bygone times. There’s a definite pig theme going on, as several saucily-dressed statues denote the savory meat of choice served around here. Classic Coca-Cola signage rounds out the quirky roadside ambiance.

Orders are placed at the front counter for pick-up. There’s a menu on display, or grab one of the paper ones to get familiar once a line has formed. It’s best to be ready to order when the time comes. Folks get moved through here quickly. A handful of tables allow 15 people to dine in the cabin, with seating for a couple dozen more beneath an attached covered patio.

Having stumbled upon Shack in the Back by surprise I hadn’t done my homework on what best to sample. The gal working the counter said her favorite was their turkey ribs, a specialty here, that is served with a homemade White Lightnin’ sauce. Having no benchmark for this delicacy I went with a half rack of ribs and a pound of pulled pork, with sides of Nanny’s potato salad and mac & cheese. 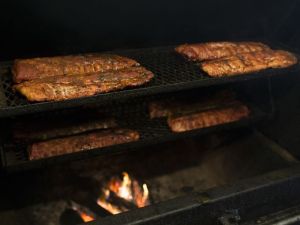 Racks of ribs rotate inside the pits at Shack in the Back BBQ, as they absorb the wood-fired hickory smoke. | Photo by Alton Strupp

The ribs were fall off the bone tender, sweet and tangy, with a distinct brown sugar essence noticeable. They are dry rubbed and simmered 14-16 hours, slow cooked at 250 degrees, in one of the two homemade pits. Sivells employs a rotating shelving system allowing the meats to self-baste, with the fat and juices from each item dripping down onto the racks beneath as they cycle around, keeping the meats moist amid the wood-fired hickory smoke.

The ribs didn’t require sauce, but I tore off pieces of the charred bark and dipped the edges into a Styrofoam cup of the house Hot BBQ sauce. It was delectable.

I found the pulled pork to be even more compelling. This is such a common way to serve barbecue, making it all the harder for a restaurant to elevate its version to a discernible level above others. The pulled pork at Shack in the Back was masterful. It was tender, smoky and had a luxurious texture. You could put sauce on this, but it would obscure the wonderful char-grilled flavor already locked inside.

The potato salad was substantial and really tasty with a splash of the house Tangy Mustard sauce on it. The mac & cheese was impressively substantial and tasted homemade. All the sides are done fresh daily right in this kitchen. It’s hard to go wrong with any item.

Of note, Shack in the Back is one of the few barbecue places locally that offers Burgoo, a dense and spicy meat and vegetable stew that can be purchased as a side or by the gallon. This dish dates back some 150 years to unknown origins, and no two people make it the same. At Shack in the Back they stir in chicken, andouille sausage, pulled pork and brisket, some cooking upwards of 16 hours on the pits first, combined with 13 different vegetables that together offer a pleasant kick.

Considering the quality of the items I sampled, I’m excited to give other barbecue staples here a whirl, like the smoked sausage, chicken wings and smoked bologna sandwich. Take the ride out to Fairdale and find this little log cabin with the smoke rolling out its stacks – the food is inexpensive, hand-crafted and impeccably delicious.

This entry was posted in Food, Reviews, Travel and tagged Shack in the Back BBQ. Bookmark the permalink.