Crowds Fill DC and Beyond in “March for Our Lives”

Posted on April 3, 2018 by theurbanllama 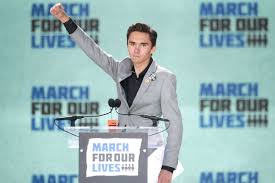 David Hogg, MSD student and one of the #NeverAgain organizers.

People came from every corner of the country on March 24, to demonstrate in support of putting an end to gun violence. Yes in our schools, because that is such an inappropriate location for guns and murder, but also in our streets, urban or rural, big city or small town.

The March for Our Lives was sparked in the aftermath of the 17 deaths at Marjory Stoneman Douglas High School in Parkland, FL on Feb. 14. Surviving students launched Never Again MSD, a student-led gun control advocacy group. Millions of posts on social media have borne the tag #NeverAgain, and commentary from the Parkland kids about the incident and friends lost have gone viral.

Before Parkland’s students spoke out, no moniker hung on this generation that accurately encapsulated their upbringing, but we know them now as the Mass Shooting Generation. Young people currently live each day under an assumed threat of death or violence in their places of education. School shootings have become so commonplace that educational facilities and daycares must frequently train for them.

Think about that for a second. As parents, we are willingly dropping our children off at schools, where a perceived threat of violence exists daily, and we’re okay with that. I may have an active shooter drill at work, but as an adult I realize the world is a dangerous place. That is a reality I was allowed to grow into understanding once my school years were well past.

Our current children have no choice. They were born into this violence and must attend school. We drop them off there five days a week, leaving teachers and school administrators to offer protection, in a situation where it is not possible to adequately be prepared for a child gunmen going on a rampage.

The students at Marjory Stoneman Douglas said “enough!” Enough of the violence, the funerals and hollow promises of change from politicians held hostage by special interest. By taking to social media, Never Again MSD gained a voice with its message of sensible gun control measures and pushed back against high-paid lobbyists from the National Rifle Association (NRA).

This injection of youth into the gun control debate has changed the dynamic of the conversation. The kids know this isn’t the atmosphere their parents attended school under. Laws are available to tighten lax firearms purchases, and adults have chosen to act against the safety of young people and instead lined their pockets with cash or re-election victories.

What’s interesting is the Parkland kids can’t be bought off by the NRA or quieted by Republican political theater. When they hear empty rhetoric they jump on social media and call “bullshit.” This has allowed them in slightly more than a month to see the passage of sensible gun control measures in Florida and organize one of the largest protest marches in American history. 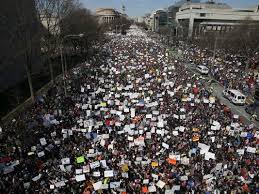 With help from the nonprofit organization Everytown for Gun Safety, the student-led March for Our Lives rallied more than a million people to Washington, DC, and an estimated million more gathered in the 800 sister demonstrations held across America and abroad.

Some 96 people die daily from gun violence in the U.S. This march gave voice to those victims that do not make the front pages as part of some dramatic mass shooting. These are everyday people, some from good neighborhoods, others not from the best parts of town, merely in the wrong place at the wrong time and they got shot. Maybe it was a robbery, could be they caught a stray bullet in crossfire or might be for no reason at all.

“In their greed, the gun lobby and their politicians have tried to deflect and distract us, they have tried to twist what is so clearly a gun issue into anything else. But we won’t fall for it. We know that to only focus on school safety instead of American safety is to dismiss the thousands of tragedies in between the massacres. It ignores the people, disproportionately people of color, who die by bullet without even making a headline. Yet our politicians still lack the compassion to act, and when that cold inaction that continues to fuel this endless bloodshed churns and churns, it’s not difficult to diagnose the moral health problem of this country. Our nation’s politics are sick with soullessness, but make no mistake we are the cure!,” said Matt Post, a Montgomery County (MD) senior at Sherwood High School, during his remarks at the March for Our Lives.

I continue to be blown away by the poise on display by these young people. This was a massive stage, at such an emotional gathering, jumbo video displays everywhere, broadcast worldwide, yet they kept their cool, again. It was impressive.

The question is where does this energy go next and can it be sustained? These young people must keep up the momentum for another 200 days, continue registering voters, and push this conversation so it remains in a public forum, then direct their constituency to cast ballots against political candidates who refused to act on gun control. The NRA and Republican Party is wagering this youthful exuberance will drain away before November. 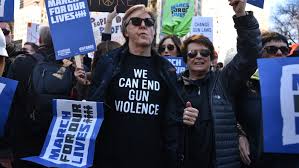 As approximately 70 percent of Americans don’t own a single gun, there is plenty of room in this conversation for gun control to become a national reality, but it will require a continued push. Sure the younger generation is impulsive and less patient, and while they may be naive, they don’t know they aren’t suppose to be able to accomplish so much so quickly. This gives them an edge.

One thing is certain, a little over one-year into Donald Trump’s chaotic administration has revealed telltale signs of a growing Democratic wave aimed at clawing back power in the midterm elections. If the #NeverAgain movement can capitalize on its message of sensible gun control and deliver the 18-25 year old voting block en masse, this movement could be the crucial piece that removes the NRA and Republican Party from power.