Posted on March 6, 2018 by theurbanllama 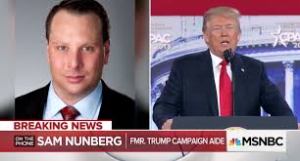 The face of fear was on full display Monday, as ex-Trump campaign aide Sam Nunberg, opted to take his mental breakdown public over being subpoenaed by Special Prosecutor Robert Mueller about his time working for Donald Trump.

From late morning into the evening, Nunberg gave interview after interview on cable news outlets and radio call-in shows. Instead of seeking discrete crisis counseling, Nunberg blew a gasket and removed any filter from his stream of consciousness, allowing unfettered commentary to roll off his tongue for public consumption.

He frequently dared federal authorities to arrest him, thumbed his nose at Mueller declaring he would not appear for questioning before the grand jury Friday, but several times turned to hosts asking rhetorically, “do you really think I could go to jail?”

Perhaps the biggest bombshell was the reflective insinuation that in all likelihood Trump did something during the election that amounted to criminal wrongdoing.

The low point was his trashing of the appearance of White House Press Secretary Sarah Huckabee Sanders. After calling in to Spectrum News NY 1, Nunberg said, “She’s a joke. Okay fine, yeah, she’s unattractive, she’s a fat slob. But that’s irrelevant. The person she works for has a 30 percent approval rating.”

The administration attempted to distance itself from Nunberg, same as it tried with the four former staffers under indictment, casting him as only having a minimal role with the Trump campaign, and possessed a “lack of knowledge” about the inner workings of the White House.

Nunberg actually was employed by Trump for years as his strategist, and played a crucial role in Trump’s decision to run for president and how Trump positioned himself as a candidate to take advantage of certain issues.

Nunberg, like Hope Hicks, is known to be a “Trump whisperer,” capable of translating the goings-on inside TrumpWorld. Supposedly it was Nunberg that came up with the “build the wall” concept, the Muslim Ban, and Trump’s early alignment to be “friendly” with Russia.

He was dismissed from the Trump campaign in 2015, over a series of controversial social media posts. Regardless, Nunberg was uniquely positioned to see any contact Trump had with Russians in the years before running for office, and how much direct contact might have occurred once Trump Tower shifted gears into becoming a quasi-political organization.

Having perviously sat voluntarily for a FBI interview, it’s understandable that Nunberg might have believed he was in the clear. To then get hit with a subpoena from Mueller is something all in TrumpWorld fear. Nunberg didn’t even get a shot at volunteering for a deposition. Instead, Mueller compelled his appearance before a grand jury, where no attorney will be allowed to assist with answering questions.

Either this is an overt intimidation tactic or Nunberg has something juicy to offer the investigation. Regardless the issuance of a formal subpoena is a warning shot to others in the Trump universe who might not want to cooperate or answer questions truthfully.

This certainly creates a financial hardship for Nunberg. He must comb through and produce all emails, correspondence, invoices, telephone logs, calendars and any other pertinent records. Along with this will come the necessity for serious legal representation, and that is pricey.

It seems clear something happened to spook Nunberg. Either he started looking through his emails and found something overtly damaging, or possibly he was personally threatened. This guy is not the big fish everyone is trying to catch, but he has information, and was offered immunity so not to be constrained by any potential wrongdoings of his own.

Let’s be honest, the guy got fired for posting racial slurs on Facebook. Imagine what his private conversations look like. The mere possibility that his loose talk could be leaked to the public would grip most anyone with fear. Additionally, there likely could be inappropriate or criminally negligent content attributable to Trump himself or Trump family members. 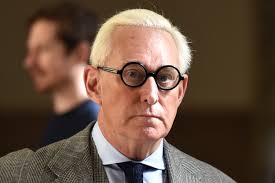 Interestingly, Nunberg’s mentor is none other than Roger Stone, who is Trump’s longest running advisor. Stone is under scrutiny in the collusion investigation for his statements about Hilary Clinton’s emails being hacked and those of John Podesta, the former White House chief of staff and chairman of Clinton’s 2016 presidential campaign.

Supposedly Stone left the Trump campaign in Aug. 2015. At issue is whether he secretly worked behind the scenes for Trump through 2016. It has been established that Stone communicated with Julian Assange of WikiLeaks fame, and was quite vocal about WikiLeaks having dirt on Clinton and the Clinton campaign.

Stone tweeted on Aug. 21, 2016, that John Podesta would be next. It’s curious how Stone would know that at that time. On Oct. 7 this magically came true, hours after the Access Hollywood tape went public. Podesta’s emails began being released that day and continued to be released in batches each day after that until election day. WikiLeaks published over 20,000 pages of Podesta’s emails.

Stone’s involvement and his fortune-teller abilities to see the future are beyond suspicious. If Mueller is climbing the ladder to Trump, Mr. Nunberg is perhaps the next wrung, and is about to get squeezed in order to reach Roger Stone. If Stone is implicated for complicity, then the real heat cranks up on Donald Trump. Stone will be in the unenviable position of either going to jail, or cutting a deal to deliver Trump’s head on a platter.