A Saturday in Lexington with the New UK Wildcats

Posted on December 10, 2017 by theurbanllama 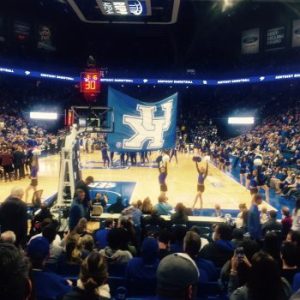 As football nears its college playoff conclusion, it tends to get lost that basketball is well underway. Regardless of UK’s bowl destination, the tip-off of basketball season is always welcomed in the Bluegrass.

Coach John Calipari has another crop of freshman thoroughbreds needing to be broke-in before their potential can be realized. But when you are the most successful D-1 program in terms of wins and winning percentage – Big Blue Nation always expects to hang a banner come March.

My brother, Geoff, offered me a seat to the Harvard game last Saturday. I usually go to a game or two each season, which is plenty. I enjoy the historic atmosphere at Rupp Arena, but it is an archaic venue and not the most comfortable, in terms of access or amenities.

Parking is a free for all; seating in upper arena is a dreadful experience, as it only has benches with no backs and is angled on a steep incline; and for some reason the SEC looks upon itself as some moral equivalence to the church, and bans the sale of beer or liquor, which is akin to a crime against nature.

I get Rupp is the epicenter of Big Blue Nation. It seats 23,500, and they cram an extra 1,500 folks into the rafters for big games. It’s a beast of a home court advantage, and UK wins nearly 90 percent of its games there, but it opened in 1976 and feels that way.

Going only once or twice a year it’s worth the experience. Sometimes my brother and I attend meaningful games and other times it’s a Harvard-quality game. No matter, I wanted to check out the new Wildcats and give them the eye test. But really, it’s more about hanging with Geoff and a few other Lexington friends, maybe hitting a hot spot or two along the way to pregame before the kitty kats tip.

Coming out of Frankfort around 11AM, I thought it best to secure some bourbon to take into Rupp, just in case a thirst arises. Metal detectors must be navigated, but staff don’t pat folks down often when entering the arena. I find a half-pint of Evan Williams or Early Times works well. Both are highly drinkable with or without a mixer, and the bottles are plastic with a narrow profile, perfect to hide in a sock or waistband.

This situation was the perfect excuse to stop past Moore’s Point, a long-standing Frankfort institution. They offer a bar and drive-thru service to purvey packaged liquor. People neglect this joint because it’s a tad rough around the edges, but everyone recognizes the iconic “WHISKEY” sign lit up in the sky.

Last Saturday was a beautiful crisp December morning for the 30 minute drive south to Lexington. There are faster ways to go, but none are more beautiful than taking Old Frankfort Pike.

My destination was the Break Room, located on Manchester Street, which Old Frankfort Pike flows right into. This outlying area is undergoing a transition from consisting of dilapidated factories, storage warehouses and vacant lots, to becoming the Lexington Distillery District.

Manchester runs into a parking area for Rupp Arena a few blocks down, so it’s not terribly far from downtown, but retrofitting those blocks into commercially viable properties remains a work in progress. As I cruised past the assemblage, slowly custom specialty shops, music venues, gastropubs, and bars are beginning to dot the landscape and fill in the vacancies to mix with the residential dwellings.

The Break Room resides inside the hub of the Distillery District, in a complex known as the Pepper Campus, called as such because soon it will be home to the James E. Pepper Distillery. Already open for business are Ethereal Brewing, Barrel House Distilling, Elkhorn Tavern, Crank & Boom, Middle Fork Kitchen Bar and Goodfellas Pizzeria.

The Pepper Campus is definitely hipster central, and the Break Room is ground zero. With its stout brick facade, custom industrial rehab interior and garage door that opens the front of the bar to the terrace and parking lot – the Break Room has a distinctive non-Lexington appeal that all this area shares. It’s popular and finding parking is tough. 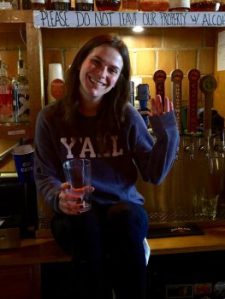 I met my buddy Eric at the end of the bar inside the Break Room, by the back door leading out to the porch that sits creek-side. Quinn, our super friendly bartender mixed a staggering Absolute and orange juice. Sadly I didn’t have a ton of time, as the first set of college football conference championship games had already kicked, otherwise I would have sat there awhile.

About 1:30 PM it was time to get moving. Eric volunteered to chauffeur, so I left my car at the Pepper Campus. We made a quick sprint over to Blue Stallion Brewing Company on W. 3rd Street, maybe five minutes away, to see a friend who also was going to the UK game with his little brother, and then Eric dropped me at Rupp.

I planned to meet Geoff at a sports bar on W. Main behind Rupp we usually hit before games, but turns out that entire block has been gutted. There was nothing left but an empty storefront and architect drawings on an inside table. Instead I wandered a couple blocks over to Shakespeare and Co. on W. Short Street.

This is a curiously Victorian-themed joint, comfortable, and most importantly, capable of serving liquor. The place was packed. It wouldn’t have done to need seating, but we were staying liquid kids. The bar was open for walk-up orders. I told ’em to keep those Absolute screwdrivers coming!

I met my brother and several other characters in all manner of festive costumes prepping to take in the UK game. I find you meet the most intriguing folks mingling at a bar. We had time for a couple cocktails and walked toward Rupp.

Fortune had not stopped smiling upon us yet. We had tickets in hand to sit somewhere in upper arena – not exactly an inspiring prospect as I’ve alluded to earlier in this post.

Here’s where we get into there being a dip in attendance at Kentucky games so far this season. Technically all games are sold out, but on average 3,400 fans are not showing up per game compared to last season through the first six home games. I wrote in some detail about this topic Tuesday, see: Attendance Dips at Start of UK Basketball Season.

Liquid enthusiasm at its best inside Shakespeare and Co.

Geoff and I were basically content continuing our conversation in upper arena when we cruised past a guy shouting, “I got lower arena for $20.”

We both took a couple steps past him and simultaneously stopped, turning around to look at each other. Lower arena for $20, priceless!

I get Harvard is playing the No. 7 ranked team in the country. It’s mismatch central, but even so, there aren’t lower arena UK seats floating around for $20 ever. Sure enough, he put us midway down in the section behind one of the basketball goals. That should be an expensive UK ticket no matter the opponent.

Yes indeed we had a game to go see. I must say from this close proximity the new UK recruits are some big boys, but young. Ultimately the Cats triumphed 79-70, to notch their seventh victory in eight games, but how they got there was of more concern than expected.

It’s funny because Kentucky never trailed, nor was there a moment when it felt like the game was in doubt, but it was closer than it ever should have been considering they were facing an Ivy League school with a 3-6 record.

Flynn, the master of the house at the Break Room, guaranteed a Wildcat victory.

The Cats led by 20 points in the second half and this looked like it would end the way fans had imagined. Then Harvard went on a 16-5 run. The grumbles around the arena were audible. Everyone recognizes each new Kentucky team, with its freshman dominated starters, suffer from inconsistent play. Sure, better it happens against Harvard than Florida, the problem being Vegas favored UK by 17, and they didn’t cover. Those who place friendly wagers on such sporting activities were less than amused.

Kevin Knox is savage, and Hamidou Diallo can score the rock. PJ Washington looks to be a disruptive force and Nick Richards is contributing early. Shai Gilgeous-Alexander put in 12 points, and sophomores Sacha Killeya-Jones and Wenyen Gabriel added to the stat sheet.

This team has a big upside, but lord they are inexperienced. The question is can Quade Green effectively run the point guard position and facilitate this offense like his predecessors. It’s not all Green’s responsibility, but a great deal rests on this freshman’s shoulders.

I enjoyed watching these two teams compete buzzer-to-buzzer, and had a great time catching up with my brother from the perch of these sweet seats. The 2017-2018 Wildcats will romp all over a vast majority of teams this season. They are too tall and explosive for most squads. Stay patient and let Calipari do his thing. It all comes down to a couple key plays during March Madness to go from a good season to magical, and that’s the rub. There is no next year with the one-and-done players, and this team once again likely has several.